THE weather might be warming up here in Australia but NBA 2K22 is keeping things ice-cold in the upcoming season. ‘Iced Out’ is the title of season 3 of NBA 2K22, kicking off on December 3. A plethora of updates are also coming this season to MyCAREER, MyTEAM, The W and the games soundtrack, as well as a very special 2K Christmas in The City.

Damian Lillard is known for some of the ‘coldest’ game-winning shots, and ‘Iced Out’ showcases these historic moments and allows you to pull your own clutch moments. Clutch Time is a new multi-player mode introduced to MyTEAM, laying down the four-point line on the court. Clutch Time offers 5 reward tiers which are achievable every 10 wins with a Pink Diamond Damian Lillard available rewarded after 50 wins. But the climb up the ladder isn’t as easy as it sounds as 3 losses in a row knocking you back to the bottom. 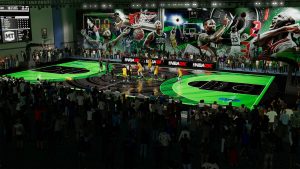 MyCAREER also gets new rewards this season as well a special holiday treat for City residents and a new mode. The Level 40 reward for MyCAREER in Season 3 is an Animated Iced Out Bundle, which includes a snowflake-covered outfit and illuminated Adidas. The Level 30 reward however will differ between next-gen and current-gen consoles. A Glider will be rewarded for Playstation 5 and Xbox Series X|S players and a special detailed lightning skin BMX for Playstation 4, Xbox One, Nintendo Switch and PC players.

The City’s rooftops have been taken over with a new game mode moving in. Rooftops offers next-gen players the chance to compete in 2v2, 3v3 and 4v4 challenges against Elite opponents The rewards on offer are unknown, apart from the grand prize of a championship belt. 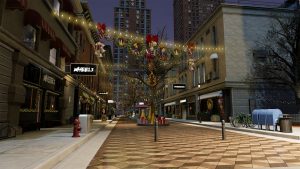 The City will also be the place to be this Christmas, with plenty of themed events happening all around town. But you’ll want to visit on Christmas Day with 2K gifting all players a present underneath The City’s Christmas Tree. Current gen players have also been promised with a gift of sorts as well.

The W introduces four new reward tiers in season three as well as the introduction of new contacts. Lisa Leslie and DeLisha Milton-Jones join The W this season, where players who complete Bronze, Silver and Gold tiers will be offered their years of knowledge.

Finally, even more bangers are being added through NBA 2K22’s First Friday’s soundtrack project. 10 new tracks from up-and coming and established artists from Def Jam Recordings, including Kendra Jae, 070 Shake and Logic, will be added to the games soundtrack when Season 3 kicks off.