Season 6 of Fall Guys kicks off next month

DETAILS about the next season of Fall Guys were recently revealed, including its launch date and new content. ‘Party Spectacular’ is the title of Season 6, which launches in Fall Guys on December 1. The Festival-themed season introduces 5 new Rounds, 25 new costumes and a special limited time event starring a Playstation icon. 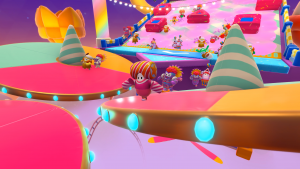 The 5 new rounds being brought to the table this season are Party Promenade, Full Tilt, Pime Dream, Airtime and Leading Light. Party Promenade is full of whacky obstacles and pathways to navigate through before finishing up on the trapeze. Full Tilt is about to tilt players further than before, featuring Fall Guys first ever 360° see-saws. Pipe Dream will have you navigating through a maze of vacuum tubes, which will either lead you closer to victory or into a trap. Airtime is all about staying up in the air for as long as possible while swinging on trapezes, walkin on conveyor belts and balancing on rotating platforms. Lastly, Leading Light is all about trying to make your bean the star of the spotlight whil obstacles and other beans try to take you down.

Season 6 also kicks off with a limited time event, starring Playstion’s very own Sackboy. A plethora of event specific rewards are up for grabs, including a Sackboy costume.