ORIGINALLY released in 2010, Sonic Colours is making its way back to a newer version of consoles later this year. SEGA of America have recently announced that Sonic Colours: Ultimate will be available for Playstation 4 (backwards compatible with Playstation 5), Xbox consoles and Nintendo Switch on September 7.

Sonic Colours: Ultimate takes us on an adventure through Dr. Eggman’s interstellar amusement park where something more sinister is happening behind the scenes. Powering his park are an alien race called Wisps who Dr. Eggman has imprisoned through out six colourful worlds. It’s up to Sonic to free all of the Wisps, who will also help him on his journey thanks to their mystical powers.

The updated version of the 2010 Sonic title will feature enhanced visuals, and graphics, refined controls and many other gameplay upgrades. Sonic Colours: Ultimate will also have a colourful physical release which can be pre-ordered now, which includes a Baby Sonic keyring from select retailers. 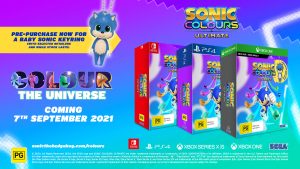