By now most people have a countdown set for September 13. We’re only 9 days away from Borderlands 3 launching here in Australia and now we have the exact time it drops. For Xbox and Playstation 4, Borderlands 3 will be launching at 12am September 13 in all local time zones in what’s called a rolling midnight release. This is an exception for North American console gamers as Borderlands 3 will launch at midnight Eastern Time across the country. For all those console gamers in New Zealand, you’ll be able to play the game first. 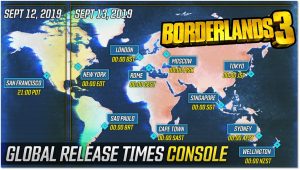 Sad news for PC gamers however as the Borderlands 3 launch will be running on British Summer Time. At 12:01am BST, Borderlands 3 will drop at the same time across the world on the Epic Store. Meaning Aussie PC Gamers will have to wait until 9am on September 13. 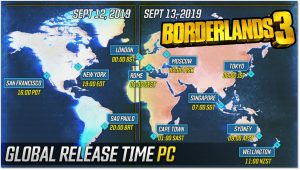 Remember we also have you covered to see if your PC can run Borderlands 3.