“The unpredictability of mother nature brings life to the playing field and makes the world of Civilization VI feel more real than ever.”

Last year I was finally able to try out Sid Meier’s Civilization VI for the first time on the Nintendo Switch and was instantly hooked. The turn-based strategy game by Firaxis Games recently came out with its second and largest expansion for the PC and Mac, Gathering Storm, and it didn’t just expand on the game either. Along with new features, it also created game changing gameplay that reignited my addiction for One More Turn.

Civilization VI: Gathering Storm introduces 9 new civilizations and 8 new leaders. For most of my gameplay I decided to choose a familiar civilization from across the ditch, The Maoris, whom instantly had the sailing and shipbuilding technologies unlocked and a free builder for my first city. These technologies came in handy as I had decided to first settle on a small island. Immediately after I found my way towards a much larger continent and expanded from there.

As the title suggests, Gathering Storm introduces a new game mechanic in the form of environmental effects. Threats including floods and volcanic eruptions had me thinking twice about where I was going to settle. However, as dangerous as it is to settle somewhere like next to an active volcano, the risk comes with greater rewards. But even if you stay away from these areas, you still run the risk of being hit by sand storms, tornadoes, cyclones, blizzards and even droughts. For the full effect I decided to crank the weather settings to their highest. Since I was playing it safe with my settlements for the most part, there were only a handful of moments where it had impacted my cities only damaging a couple of tiles each time. 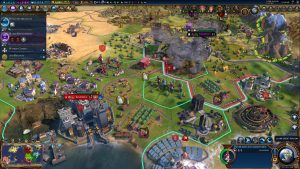 Climate change also became another factor to take into consideration. Using fuels such as oil and coal to power your cities later on will affect in-game global warming adding the risk of rising sea levels. However solar and wind power technologies can be unlocked to help this risk. The unpredictability of mother nature brings life to the playing field and makes the world of Civilization VI feel more real than ever.

The sense of realism didn’t end at natural disasters/global warming either with the ability to sit down with other leaders (metaphorically, of course) in World Congress Meetings. These happened periodically and allowed myself and the other leaders to make game changing decisions. In some cases it helped all of us, but in others it would give me the upper hand to try and screw them all over. Playing on Prince difficulty against all AI made it pretty easy to get what I voted for every time without much effort. I was able to vote as many times as I’d like, the first vote for each resolution being free but it cost me to make any additional votes. Gathering Storm introduces a new currency called Diplomatic Favour for you to spend within World Congress. Only certain resolutions like those that rewarded Diplomatic Victory Points, which count towards the newest way to win a game, had me spending almost all of my votes to lock in first place. Diplomatic Favour can traditionally be earned/traded or rewarded through world events, which is another new and rewarding side activity within the game. 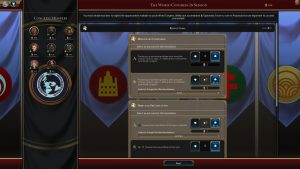 Thrown in as a Resolution vote, world events last around 30 turns and usually rewarded gold, Diplomatic Favour and sometimes Diplomatic Victory Points. These involved a variety of scenarios, ie. Helping a disaster stricken civilization, World Games and liberating city-states that have been taken over by other leaders. Competing in these events not only rewarded me but also had me focusing on certain aspects of my civilization that I would tend to forget about since my main focus was on winning with a science victory. City State Emergencies built my military to become stronger for future combat and the World Games had me build sport stadiums, meaning more amenities, entertainment and tourism.

While focusing on the science victory I was always keen to reach the next era of technology, particularly the last one. Gathering Storm introduces 21st century technologies with the addition of the Future Era. I was even more excited to recruit a Giant Death Robot to strengthen my army. Even though I claimed Diplomatic Victory instead of science before the GDR was finished being built, I still continued my game just to check it out. They’re a beast to use in combat but always come prepared when faced by an opposing GDR. 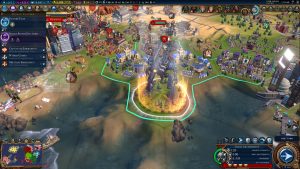 Era’s also transition from one to the other using the same mechanics as Civilization VI’s first expansion, Rise & Fall. For those unfamiliar, through each era you strive to earn points through making Historic Moments. Depending on how many points you’ve earned, you’ll enter each era in the Dark Age, Normal Age or Golden Age. Reaching the Golden Age means greater rewards and bigger achievements for the era to come.

Gathering Storm also adds two new scenarios, one of which is only available to play 1v1 with a friend. However, as much as I love a game with one solid end goal, I still prefer the openness of a traditional Civilization round.

Civilization VI: Gathering Storm is an absolute must for base game owners and those yet to try it out. This expansion has brought so many game changing elements to the table making it a refreshing new way to play. In my opinion these are mechanics I wish were included in the game from the start and hope they’re part of installments to come.

Sid Meier’s Civilization VI: Gathering Storm is available now for PC and Mac and I give it a 10 out of 10.