“ I definitely recommend for all those high score kings out there. But for those who are expecting a larger game you’ll be left disappointed.”

Have you ever liked the same boy as your sister? Well how about the same boy as ALL of your sisters? This is what has brought on the latest family squabble in Sisters Royale: Five Sisters Under Fire. It’s the latest game by Alfa System who excel in delivering a loud vibrant bullet hell but quickly falls short.

Sisters Royale: Five Sisters Under Fire tells the story of five sisters who according to an ancient prophecy are humankind’s only hope in defeating Seytan. Nope, that is not a typo either. Each hold magical powers which, when combined, will destroy Seytan for good. But these sisters hate each other and have all gone there separate ways, only to reunite later on down the track because of this one boy they all want to marry. So with this unfortunate love pentagon there’s only one solution: using magic to fight your own sisters. 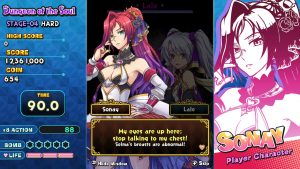 Right off the bat that’s about as much lore as you’ll get. There isn’t much story delivered through out the game except for short exchanges between sisters. But the majority of said dialogue are just of the girls making jabs at each other. A few of the lines did make me chuckle and there were of course some comments made about breasts. They still manage to keep the game classy so there isn’t anything that will make you blush. But if reading dialogue isn’t for you there is an option to hide the dialogue boxes so they’re no longer blocking almost half of the illustrations. Take that as you will but maybe people want to appreciate the artists work. They’ve done a brilliant job at it and the chibi versions of the characters you play as are, as always, adorable.

The same is said for the level design. While the feel of each level can come off as similar there are some aspects that also feel different. Both in the way they’re presented and executed. Through waves of enemies and swarms of bullets there are some additional obstacles to counter. But I wouldn’t worried about them the most. While being somewhat game changing they’re merely to keep the levels feeling fresh. The bullets are going to be your main concern. And I feel like I’m now a professional dancer with some of the fancy footwork I’ve pulled off. 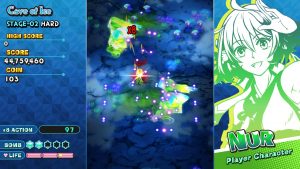 I’ve played Sisters Royale: Five Sisters Under Fire on both normal and hard difficulties without there being a big jump between. The swarms of bullets flying towards me in bright and sometimes pretty patterns put me into a trance. My eyes forgot about everything else on the screen except my character. Soon enough I became a pro at dodging and learned that the true secret to making it out alive was to find the safe spot. Once there, I was golden. But of course you do have other abilities apart of shooting and dodging and these became extremely handy when overwhelmed. Each sister has her own unique summon and bomb abilities as well as a unique bullet pattern. While at first I thought that one sisters abilities made here easier than the others because “she’s the youngest,” I eventually realized I was wrong. I just had to “git gud” playing as the other sisters.

Through each level there’s a stack of coins to collect but I was quickly disappointed with how worthless they actually were. I was hoping for an upgrades shop I could visit between levels, if not even a selection of cosmetics I could purchase. Sadly neither were the case, especially that of the former. These coins are merely for points reasons. I do see the point in wanting the highest score but I was hoping that they’d add something to grind for. A weapon or health upgrade for the long road ahead wouldn’t have gone astray. That road however didn’t take me very far, which is one of my main gripes. 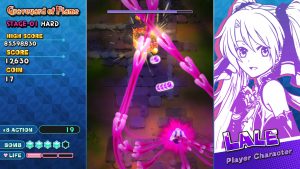 Sisters Royale: Five Sisters Under Fire is quite a short game. A single run of the story can be finished in half an hour. Granted there are five sisters meaning five runs with somewhat different play styles. But I personally don’t find this to be enough of a reason to come back over and over again. And for the price point, I would probably wait until it’s on sale. There’s also an extra DLC character available for purchase that’s closer to what I’d like to pay for the full experience.

Overall Sisters Royale: Five Sisters Under Fire isn’t a horrible game, I just personally feel like it’s missing a few elements. The dancing and dodging required makes for an excellent challenge as well as the different playstyles of each sister. I definitely recommend for all those high score kings out there in the arcades. But for those who are expecting a larger game you’ll be left disappointed.

Sisters Royale: Five Sisters Under Fire is available now on Playstation 4 and Nintendo Switch and I give it a 6 out of 10.