Open-world exploration has always been an RPG adventurer’s playground. But I never would have expected to see a genre of polar opposites like truck-driving simulation mix in those core RPG elements of exploration, leveling and unlocking new areas/equipment. SnowRunner took me by surprise and at first glance I could tell I was going to spend hours upon hours exploring the great open road. However I wasn’t expecting to spend hours upon hours trying to scratch the surface due to it’s early brutal difficulty. It’s as if the game is asking you “Do you really want to be a truckie or not?”

SnowRunner is the follow up to 2017’s MudRunner by Saber Interactive. Since this is a truck-driving simulator there’s no real story to follow but it’s execution of objectives and progression matches that of an open-world adventure. Starting off with a stock standard truck to get around in, you’re given main quests known as Contracts. Most of these are used to help rebuild local industries. But more importantly are the side jobs scattered throughout each area. They give smaller rewards but sometimes larger results like unblocking roads that make travel routes easier. There’s also lookouts ala Far Cry, Assassins Creed, etc, that uncover large areas of the map. Already this had sparked a huge interest in a genre that I don’t tend to lean towards. And as a fan of open-world sandbox games I couldn’t wait to get out there and start exploring. But my passion for open-world adventure started to sink fast. 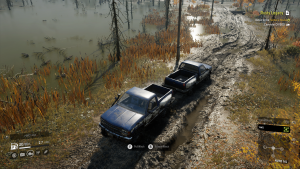 Objectives in SnowRunner mostly have you going from A to B carrying some form cargo. Different vehicles are good for different kinds of jobs and can either be purchased or found in the open-world. Heavy vehicles which can move large loads or heavy trailers are perfect for deliveries and larger rescue missions. While exploration jobs or small rescues can be done with a pick-up truck or something similar. However these aren’t jobs you can quickly churn through. With distance and obstacles in mind jobs require both patience and planning. SnowRunner is lowkey a hardcore simulator. It may look like a simple task of driving around trucks but once your wheels meet the road every environment and terrain is met with the up-most of realism. Routes you start planning out on the map might be good on paper, but in reality things can quickly go pear shaped. Especially in a truck with stock standard parts. Starting off in Michigan, USA after a huge downpour, your biggest enemy are the once dirt roads that have become deep puddles of mud. Don’t let the title fool you. While there’s an emphasis on traversing through snowy roads, SnowRunner still has a heavy amount of mud in its tracks. It’s reached the point where mud has now become a personal trigger. There’s no escaping these sticky traps as they become a staple obstacle throughout SnowRunner. Along with mud you’re also met with water, rocky areas, steep mountains/hills and of course snow. Your starter rig won’t easily cope with the difficult terrains at first. Your best bet is to either drive around them or upgrade your rig. Everything from wheels, engines and suspension can be upgraded to make for an easier time on the roads. But obtaining the best gear for the job let alone decent quality gear can be a bit of a slog.

This was around the time I started to feel almost defeated. My rigs were able to do some jobs but not most, but I had a lot of confidence that it could still get done. However I slowly began to reach breaking point as my attempts at completing tasks would fail at the last minute. Of course, getting stuck in the mud was the main doozy. Reaching the half way mark with a trailer load of supplies only to be toppled over driving through rough bumpy terrains was the other. Recovering my truck and returning to the garage was the easy way out. But while my truck was saved, my precious cargo had to be left behind. SnowRunner can start off feeling extremely brutal and one point I wanted to give up. Spending over an hour just on one task which I still couldn’t achieve wasn’t my idea of fun. Upgrading my rig was the obvious solution but upgrades are locked behind leveling progression and the decent gear is a lot further away than you think. SnowRunner’s leveling isn’t like an RPG where you reach level 5 in no time. If you’re lucky you might be able to find some quality upgrades through exploration. Which after many failed delivery attempts is what I turned to. 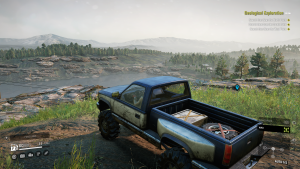 After exploring as much of Michigan as I could, I turned to my other options. Taymyr, Russia is an area very similar to Michigan, lots of forests, mountains and mud. Nothing much in the way of memorable views though. The detail in what I expected to be stunning views just wasn’t there, at least in the Xbox One version. In saying that the game does still look pretty close up. Alaska on the other hand puts the Snow in SnowRunner. However I chose to wait until later on to tackle Alaska’s white powdered wilderness.

Finding doable jobs where I could helped me level and it wasn’t until after rank 5 where I started to see everything slowly come together. I could unlock wheels that would make it through tough terrains, engine power that could pull heavy weight and I wasn’t recovering my vehicle as much. Even though I wanted to throw in the towel early I had a feeling that atop of it’s steep slope in difficulty, SnowRunner actually had potential. 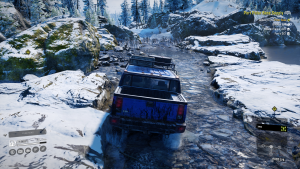 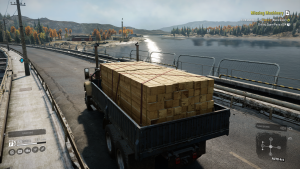 After progressing through ranks 5,6, 7, etc. SnowRunner felt a lot more relaxing than earlier ranks and was well worth the wait, even though it took multiple sessions to see its true potential. It became a satisfying experience to hit the open road for a drive through the country without hitting progression walls or impossible to traverse mud tracks. And I was able to tackle previous tasks that were too hard in the beginning, meaning easier rewards and XP. I even found what I considered as the “Master Sword” of the game which made the majority of tasks much easier. The icy roads of Alaska were finally tackled as well and surprisingly they weren’t too difficult to manage. Funnily enough I can’t wait to explore the remainder of the maps which is a huge contrast to what I was feeling earlier in the game.

SnowRunner isn’t going to be everyone’s cup of tea. I’d highly recommend this for fans of driving simulators and truck aficionados. But for newcomers to the genre I suggest you walk into this game with a high amount of patience. If you’re a fan of exploration and open-world games than you shouldn’t have as much trouble as I did getting into it.

SnowRunner is available now on Xbox One, Playstation 4 and PC and I give it an 7.5 out of 10.