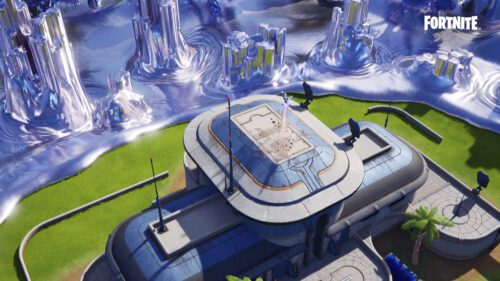 A shiny new season has begun in Fortnite where everything is starting to look chrome. And no, we aren’t talking about the browser. Chrome buildings, chrome weapons, chrome you, plus a plethora of new character skins, and more are available in Chapter 3: Season 4 of Fortnite.

This season, eerily named Paridise, see’s the island taking on a new splash of paint as chrome starts to take over anything it touches. A brand new structure has also appeared near the abandoned Sanctuary. Built entirely of chrome, Herald’s Sanctum is a hexagonal-like structure which houses the chrome leader, The Herald, as they overlook the island. Other locations are also following the trend of being high. The newly named “Cloudy-Condos” is just one point-of-interest taking to the sky in fear of the chrome takeover. 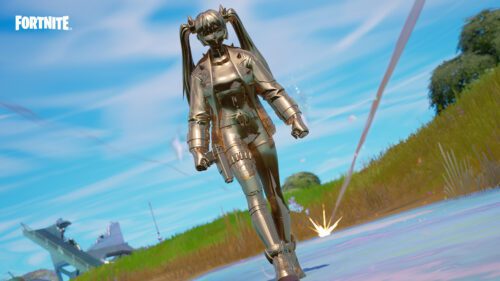 Players can also paint the town chrome with an assortment of new chrome weapons and Chrome Cplash. You can literally turn yourself into the Terminator with a hit of Chrome Splash and become temporarily immune to all types of damage. Two new chrome weapons are also available via Chrome Chests: the EvoChrome Shotgun and the EvoChrome Burst Rifle. The Hunter Bolt-Action Sniper is also making a return after debuting in Chapter 3: Season 1.

Other changes this season that involve chrome include the replacement of Port-A-Forts. Instead, players will start to come across Port-A-Bunkers, that are 1×1 metal structures featuring a ramp, doors and tires for a quick escape. Vaults on the island will now require keys to gain access, which are spread across the island. The security-level of the vault will determine how many keys one will require.

And finally, this season’s Battle Pass features a plethora of new character skins to collect, featuring one Spider-Gwen. Other character unlocks include Meow Skulls, Bytes and the leader of chrome, The Herald. Whom will be available at a later date.