The original Subdivision Infinity is an iOS/Android game that released in 2017. It has recently been ported to consoles and PC, releasing as Subdivision Infinity DX on August 8, 2019 developed by Mistfly Games and published by Blowfish Studios for consoles and Crescent Moon Games for PC. I’m pleased to see there have been some decent sci-fi space combat games released this year with Rebel Galaxy Outlaw and another of Blowfish Studios’ published titles, War Tech Fighters. Another game that I can now recommend to space combat fans is Subdivision Infinity DX. It features arcade style gameplay and fast-paced dogfights in some amazingly detailed areas of space. You play as Sergeant Jed Riddle, callsign Rebel-1, who is hired to investigate a distress signal from Control Centre M-t12 on Alpha Tyche.

The opening scene has you sitting in the cockpit of the fighter as it leaves the hangar bay of a larger ship, but this is the only time you see inside the cockpit. The rest of the game is played in third-person view. It’d be great to have a first-person option but third person allows you to see the amazingly detailed space scenes around you. I also feel third person makes it perceptively easier to “dodge” incoming fire as you see it strafing towards you from a distance. You’ll find yourself dodging and weaving whilst simultaneously trying to keep your weapon crosshairs on the target. Aim Assist is turned on by default and I’m glad to have this feature as the Xbox controls sometimes made it challenging to hit fast moving targets. I had greater control using mouse/keyboard on the PC version but still appreciated the aim assist. 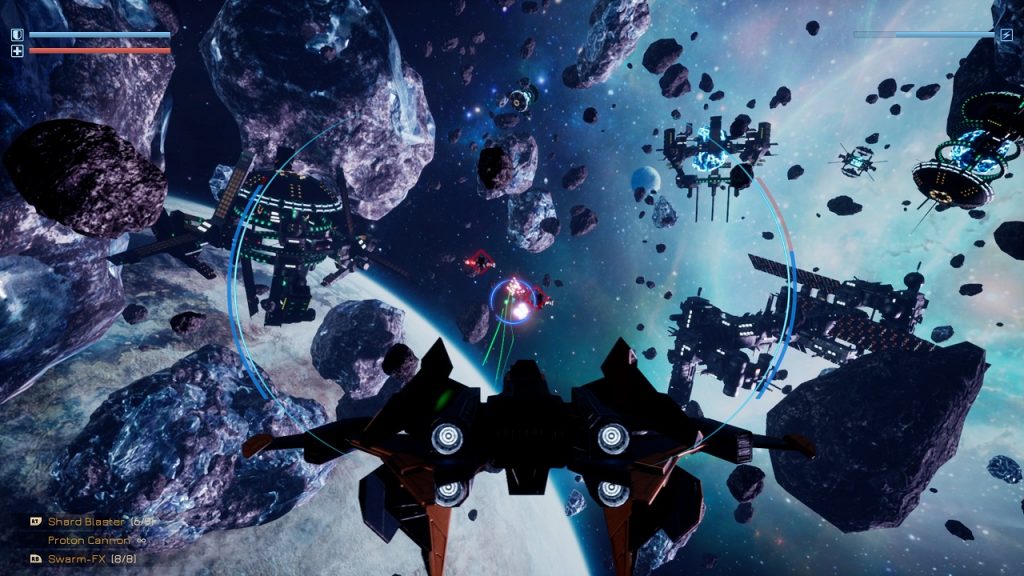 The larger boss ships and base turrets really pack a punch, so you want to make sure you’re constantly moving and evading which makes aiming at the enemy difficult at first but you learn to lead your targets. The initial starting ship is a basic one but will get you through the first set of 5 missions on Alpha Tyche with a few affordable upgrades. I was trying to save my resources, aiming for a specific ship upgrade but I struggled initially with the final boss ship. I could get it’s shields down relatively easily, at which point it deploys a forcefield and more fighters spawn in. I dealt with the fighters and shield generators, but the boss unleashed on me as I was too close and blew up. After a few more attempts I had to exit the mission and invest in a better weapon to succeed. This was my first reminder to ensure I kept upgrading my ship/weapons to tackle new missions. 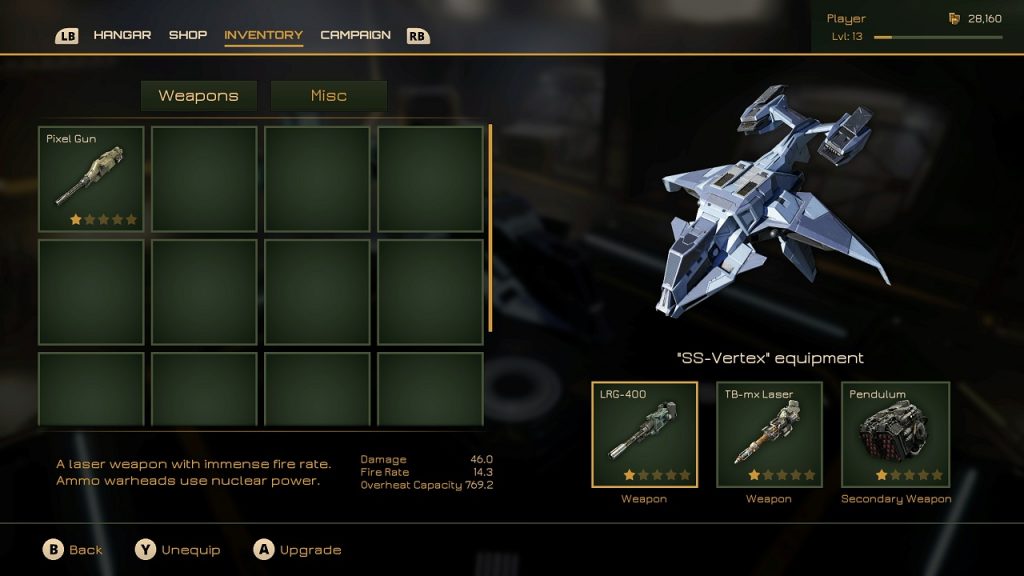 Weapons can be upgraded up to five times with gear crates and credits, and new weapons unlock with higher pilot levels.  New ships can be bought for credits and others you unlock using specific blueprints that you can find through exploration missions and mission completion rewards. Each ship model can be evolved once which increases it’s cargo and armour, and gives it a cool visual upgrade. You unfortunately can’t customise the paint job yourself, but there are some cool looking ships regardless. The descriptions of the exploration missions and rewards tell you which blueprints are available so you can focus on the one you want. Exploration can be a bit grindy but I found it worth my time to get the ship blueprints as the unlockable ships were stronger than the ones you can buy for credits, plus they look really cool too. 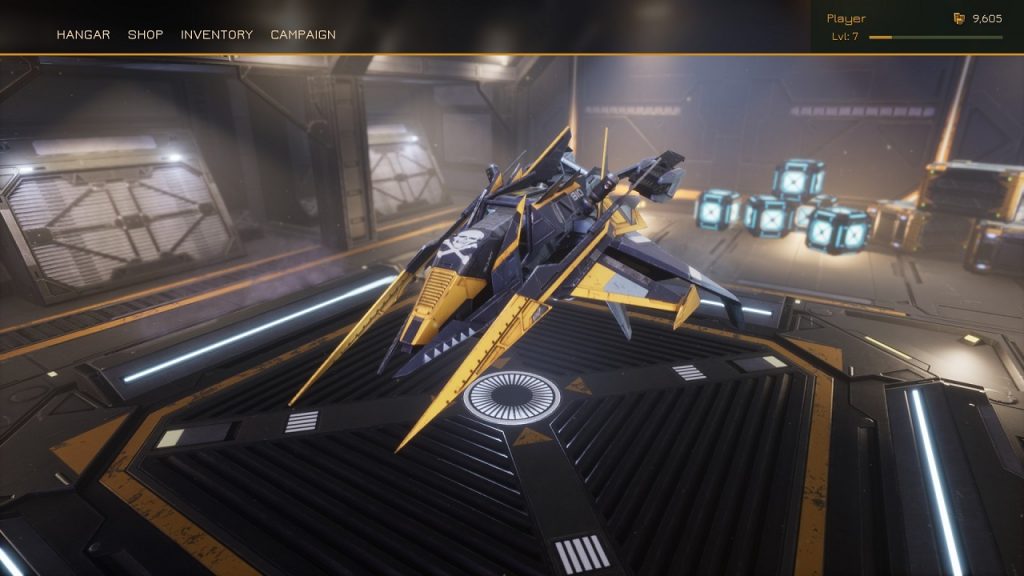 Exploration missions offer an area of space to mine resources using a separate mining tool which takes up a weapon slot. You can find them through searching the expanse of space near stations or asteroids. You also have access to radar probes which add a waypoint to the nearest loot crates hidden in large asteroids. Some asteroids have mining access ports that require keycards found as mission rewards or crate loot. There were a few times where I could see the loot crate waypoint but spent ages flying inside and around these large asteroids, getting frustrated. There are sometimes some discreet accessways that you find if you slow down and look for vents, or you may need to fly away from the asteroid to be able to see the huge hole in the back of it that you missed before.

One big piece of advice here is to remember that your progress isn’t saved during a mission or in an exploration mission, only when you leave that system/mission. I learned this the hard way after spending 45 minutes in an exploration area mining ore and trying to find all nine loot crates. I finally located the last crate which was surrounded by a minefield. I destroyed some of the mines around the crate but then a turret started blasting me and other ships were buzzing me too. I destroyed the turret and an enemy ships, then zoomed in quickly to get the crate contents. I consequently blew up as I had not cleared enough of the mines, losing all of that loot and time in the mission. Remember that you can warp back to the hangar to collect the loot you’ve got and it will save your exploration progression so you can go back anytime. 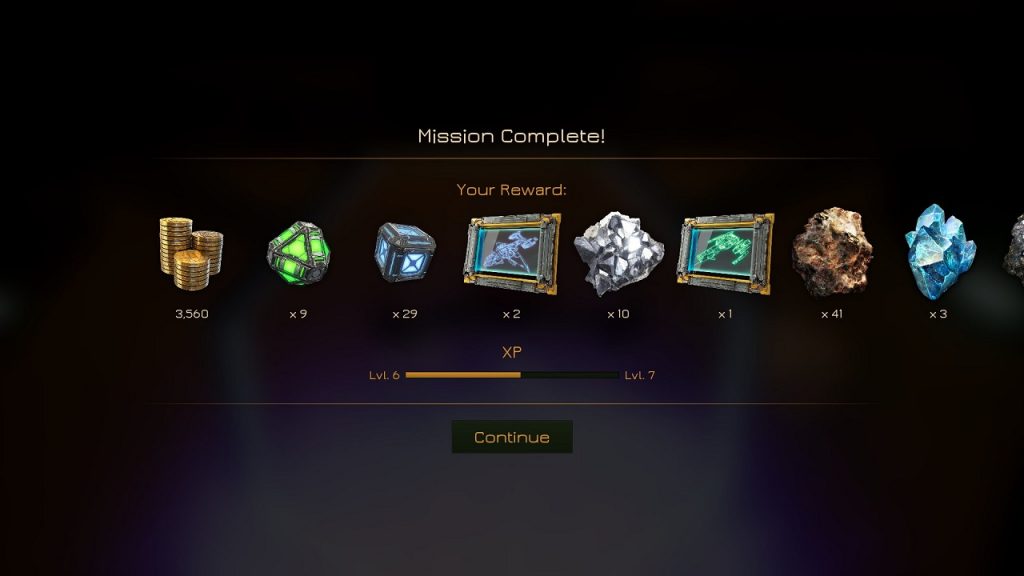 I can’t say enough how incredible the space scenes are as you fly and battle through them. There’s a decent variety of enemy fighters and capital ships to destroy, as well as bases to explore with turrets and lasers that can be tricky to defeat if you stand still. Your ship’s mobility is easy to control with mouse/keyboard or the Xbox controller, allowing you to dodge incoming fire whilst raining fire on your enemy. The game runs very smooth with so much detail in each mission, though there were some framerate drops when ships exploded. The overarching story is engaging enough to keep you progressing through the 30 main missions and 10 exploration missions, spread over five amazingly detailed locations in space. There’s no voice acting in the game, just images of the characters with text boxes which detracts from the immersion, but there’s enough humour and banter between the various characters that it’s not dull or boring. What this does though is allow you to get back into your ship and concentrate on the space combat action which is where the game shines. 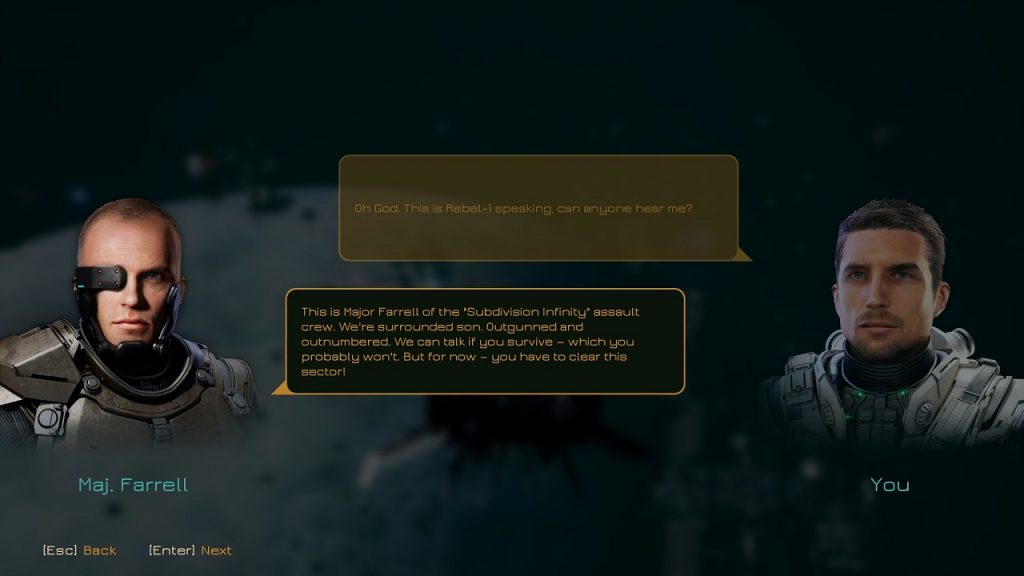 Overall I gave the game a 7.5/10. Subdivision Infinity DX is a fantastic space arcade shooter with incredibly detailed environments and great action combat. Missions are short but action packed allowing you to play the game in small sessions and ship/weapon upgrade progression keeps driving you forward through the game. With no voice acting, the story isn’t as immersive as it could be but is enough to fill in the gaps and get you back into the action.

This review utilised a game code provided by the publisher, played on Xbox as well as PC. Subdivision Infinity DX is available now on Xbox, PlayStation 4, Nintendo Switch and PC via Steam.