What do the initials “S.M.B.” stand for? Well, if you ask anyone here at Game On AUS, It stands for Super Mario Bros. But in this instance, Mario is in a completely different ballpark. SMB also stands for Super Monkey Ball, which this year celebrates its 20 year anniversary since its initial launch in 2001. 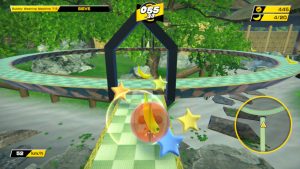 This classic and sometimes chaotic puzzle platformer series by SEGA initially launched in arcades and then into homes on the Nintendo Gamecube. It introduced the world to the challenging physics-based gameplay of manoeuvring a ball-trapped monkey named AiAi around various challenging levels. To celebrate 20 years, SEGA has launched Super Monkey Ball Banana Mania, including a plethora of levels from SMB 1, 2 and Deluxe that have been visually optimized by 2021 standards but still have that early 2000’s vibe. Banana Mania also features various other activities, game modes and cameo’s from iconic SEGA characters.

Super Monkey Ball Banana Mania tells the story of AiAi and his friends who must collect as many bananas as possible from the hands of the evil Dr. Bad-Boon. It’s told through various episodes of the “SMB Show”, however there’s no actual dialogue included and the levels don’t involve any story lore. Which is understandable as Super Monkey Ball is originally an arcade game. You’re simply just a monkey in a ball collecting as many bananas as possible and reaching the finish line in the time limit. 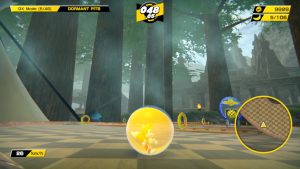 AiAi isn’t the only character to choose from with his whole gang joining him for the ride, as well as various other unlockable SEGA characters, including Sonic The Hedgehog and Tails. You can basically turn this into a new Sonic game as you zip around collecting Gold Rings instead of banana’s. Other unlockable SEGA characters include Kazuma Kiryu from the Yakuza series and Beat from the lesser known Dreamcast game, Jet Set Radio.

Moving through levels requires a certain level of skill and patience as the actual stage in each level has to be tilted in such a way. Which might sound simple but in reality it requires a level of skill, focus and patience. It started off relatively easy but eventually became both super challenging and super frustrating. Puns intended. While progressing through the Story Mode, my main focus was to get to the finish line. With or without the banana’s. However, it’s not all about how fast you can get to the finish line. In the case of Super Monkey Ball, slow and steady wins the race as most levels give you enough time to collect all of the banana’s without breaking a sweat.

Each level feels unique, giving you a new challenge every time. From balancing on narrow, curvy paths to trying not to fall off moving platforms. But I will warn you, Super Monkey Ball will you feel both comfortable and confident only to hit you with a larger unknown challenge on the next level. There’s usually a logical solution to even the most difficult levels and sometimes surveying the level is vital for completion. And saves much time and frustration in the long run.

However, this wasn’t always the case as I hit a difficulty wall a few worlds into the Story Mode. I’m stubborn when it comes to puzzle games and won’t look up solutions or give into “Help” functions. But there was one level in particular where I couldn’t help myself but to “cheat”. And even then, I didn’t have the skill or the required luck to finish it off. Luckily, I was able to skip the level entirely. However, I did this multiple times and I refuse to disclose the total number.

There’s plenty of other things to do in Super Monkey Ball Banana Mania if you’re more stubborn than I am, consider skipping levels as cheating and/or require a break from hitting your head against the wall. 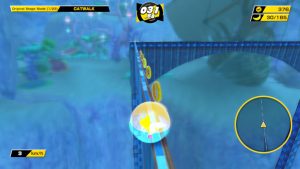 Challenge Mode includes levels from Story Mode that must be completed from start to finish without leaving. There are also Special Modes that can be unlocked using Banana Points. However these are much more challenging than Story Mode levels, especially Original Stage Mode. Which includes unchanged original Super Monkey Ball stages.

Having not played the original myself, I wasn’t aware that they were much more challenging and that the Banana Mania levels were merely easier iterations. I can also confirm I barely made a dent in Original Stage Mode due to the insane difficulty.

But for much less challenging fun, Party Mode is where it’s at. It’s full of mostly sports games for 1-4 players, including Tennis, Golf, Mini-Golf and Soccer to name a few. They’re a nice way to unwind from the stress of failing stages over and over again. But while it’s a nice added bonus, I personally wouldn’t consider it a sole reason to buy Banana Mania.

Reviewing Super Monkey Ball Banana Mania on Nintendo Switch, I was a little disappointed that the handheld consoles capabilities weren’t fully iterated. I would of loved the extra challenge and precision of using the motion controls of the Switch to manoeuvre around stages. Alas, we’re stuck using the thumb sticks instead. Definitely a missed opportunity.

Super Monkey Ball Banana Mania provides hours of challenging fun with over 300 levels to play through. Fans of the series will adore it, newcomers on the other hand might have difficulty appreciating it for its challenges. Definitely a must have for those who like a good challenge.