Superman Finally Gets Unlocked In Fortnite

A plethora of Superman swag in Fortnite has finally been made available to players after weeks of being locked away. Superman and Clark Kent outfits, along with other related gear, were introduced in Chapter 2 Season 7 as a separate entity of the Battle Pass. However, players were unable to obtain any of the Superman items for the first couple of months of Season 7. Nor did they know how they would be obtaining them.

As of yesterday, players will be able to obtain said gear by completing a series of quests. There are two tiers of Superman quests, containing different Superman/Clark Kent looks. The classic set can be obtained by completing any 5 quests from Clark Kent, Armored Batman and Beast Boy. These DC NPC’s can be found at the farm on Corny Complex’s right, Dirty Docks and Weeping Woods respectively. Along with outfits, you’ll be rewarded with a Superman Shield Spray, Daily Planet Back Bling, Superman Cape Back Bling and Secret Identity Emote. 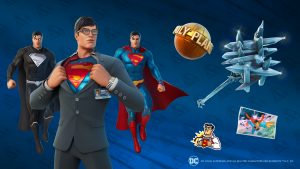