TCL have become a brand to keep an eye on, especially when it comes to their range of televisions. Last year’s line-up of QLED Mini LED Smart TV’s, like the 65” TCL X10 I reviewed, were the first of its kind in Australia. And I can confirm that they’ve continued to deliver an impressive television viewing experience since then.

Their latest range of Smart TV’s have come onto the market and we were lucky enough to have been sent the 55” C825. Not only does it feature stunning picture quality, but also a smarter more organized way of television viewing and audio that will blow you away.

Before going into the television itself, the latest TCL Smart TV range is based around the introduction of Google TV. It gives the range some exclusivity as TCL are one of two manufacturers of Google TV’s this year. But the C825 still carries the Android TV OS, another product of Google, until a firmware updates comes out. Both however bear similarities in regards to features, including Google Assistant and connectivity to the rest of your Google Home devices and Alexa.

However, I’m still living in the stone age and don’t have Google Home or Alexa.

On start-up, the C825 shows off the main Google Assistant feature and how it can enhance your viewing experience by talking to your TV instead of using the remote. Not only does it use examples such as voice commands to instantly take you to a TV show or movie, which has been around for years thanks to Google Chrome, but also shows the intro actors ask, “Who stars in (insert movie here)?” It was as if the TV was challenging me, which it clearly wasn’t but I still accepted it. How much could I do with this TV with just my voice? 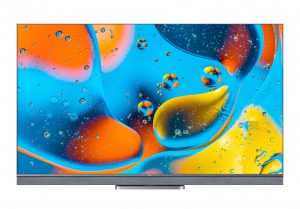 To be honest, some stuff but not everything. Nor would it be as easy as the actors in the intro video made it out to be. I picked a show on Stan and asked to play it. It played my show. I asked the TV to set the volume to 20, and it did. Easy peasy, right?

However there were times the TV didn’t want to play ball. And I put it down to TV volume with a dash of “Is it because my accent isn’t American?” I’m pretty sure my neighbours got sick of hearing me yell “Okay Google” repeatedly. Also, I’d rather quietly IMDb movie actors rather than interrupting other peoples viewing experience. It’s a neat feature but falls short on picking up commands during regular television viewing.

While volume levels might affect Google Assistant in doing it’s job, the audio quality that comes out of the C825 is just…*chefs kiss* And it wasn’t until I was in the next room with a show still playing that I noticed just how powerful it is. With it’s built-in subwoofer along with Onkyo Audio and Dolby Atmos, the C825 makes for an incredible audio experience. Overall I found that setting the volume to 20 was a comfortable range with the right amount of oomf for general TV viewing.

I also can’t stress enough to play around with audio presets. They’re big game changers, but also double check that you’ve match the right presets. Forgetting to switch back from “Game” audio, for example, meant I was getting lots of background noise and little dialogue.

The same applies for Picture presets. Except I only used High Definition and Game settings. I might of swerved away into “Sports” mode while playing NBA 2K22 out of sheer curiosity, but that only delayed the response time of my controller.

The 55” C825 may be the smallest of this particular model, but size definitely isn’t everything. The combination of sharp booming volume and crystal clear high-definition 4K gives you a cinema-like experience.

Android/Google TV is a total entertainment hub, with access to streaming services, Google Play Games, Google Play Movies & TV and many other apps available at your finger tips. Just as if you were to download on your phone. But there are some limitations, more so when it comes to games.

The C825 gave me another challenge: could I use the TV as a gaming device? Yes and no.

Understandably, the games available in the Google Play store are only a small percentage of the many that you’d find on your phone. There are some hidden gems that you can play, including platformer, racing and adventure games. But you’d need a compatible bluetooth controller as the remote control is useless in this situation. Something like the 8BitDo SN30 Pro 2 I reviewed earlier this year is a perfect Android compatible controller.

The other interesting but disappointing add-on is the camera that slots into the top of the TV. I wasn’t a fan for two reasons. Firstly because I could barely find a use for it. And secondly, when I found an app to try it out, it delivered poor camera quality. The C825 might be 4K, but the camera is a lot lower on the resolution scale.

The TCL C825 55” is a superb quality TV and affordable as well. At less than $2000, it’s a solid investment to make. While I’ve come to trust TCL for it’s unbeatable display quality, it was the built-in subwoofer and overall audio quality that won me over this time.

The TCL C825 and the rest of the 2021 range can be found at most electrical retailers.