It might surprise you that TCL are at the forefront of the latest in television technology. However it’s going to cost you a lot more than just a pretty penny. While a lower price might attract customers, TCL’s new range of QLED TV’s will also do the same in more ways than one as they start rolling out the first of its kind into the Australian market.

The new TCL X10 model in both 65” and 75” are part of a larger range of TV’s released in July of this year. They come with all the bells and whistles that you’d expect from other Smart TV’s, including 4K capability and access to internet services such as Netflix and YouTube. The TCL QLED X10 is also an AndroidTV, cutting out the middle man to give viewers more freedom to access their favourite content with the press of a button. But before we go into the entertainment features, I’ll answer the question you’re probably asking yourself: What is a QLED TV and why are these newer models so different?

QLED stands for Quantum Dot LED. Quantum Dots can range from anywhere between 2-10 nanometres in diametre. This technology isn’t new either as it’s been available on the market over the last few years. What makes QLED different to regular LED TV’s is the way it focuses on emitting primary colours as opposed to regular white LED screens. Because of this, QLED TV’s produce more defined and vibrant picture. On top of being a QLED TV, TCL X10 also has Mini-LED. These too help in creating even greater contrast and depth to television picture by using tens of thousands of mini LED units. Mini-LED is technology we’re slowly starting to hear more of in tech. And being the only TV’s in Australia with Mini-LED technology, it’s understandable why the TCL X10 has somewhat of a steep price point. I tested TCL’s X10 65” model while watching TV shows, movies and playing video games and was very impressed with the quality, especially during the latter. 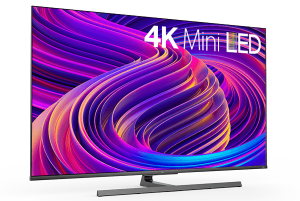 The TCL X10 comes with multiple picture setting presets, including one for games. While my go-to setting is mainly Dynamic, I was impressed to have kept the Game setting enabled throughout my review time. I usually find Game picture setting presets to be dull, but the X10’s QLED technology offered enough vibrancy that I couldn’t even tell I had the option on. While a TV of this size is more suited for console gaming, I decided to take it one step further and connect it to my PC. While it showed the same satisfying vibrancy and experience as it would on console, I wouldn’t use it for PC gaming even semi-regularly. On top of shuffling furniture around, I found there was some minor stutter in the picture when moving around in-game. Whether or not it was because of HDMI quality is unknown.

The capabilities of QLED was a big standout but it’s how the TCL X10 becomes more than a standard Smart TV. AndroidTV gives you the freedom to access more than just staple streaming services. On top of Netflix, Prime Video and Youtube, you also have access to Stan, Disney+ and even Twitch. These and many more apps can also be found through the Google Play Store. And logging into most of these services are as easy as having an access code processed for you to enter into your already logged in mobile device or computer, saving the hassle of entering details using the remote.

But like other devices that offer access to Twitch streams, I still recommend watching from PC if you like to interact in chat. Even with the on-screen keyboard I found it to be too much hassle. The TV also allows you to connect a Bluetooth keyboard but even then I found the experience to feel a bit clunky.

With all of this button pressing to put up with, the TCL X10 also comes with Google Assistant connectivity as well as Chromecast built-in. A Google Home network isn’t necessary however the TV can be connected to your Home network as well as Alexa. This means enjoying hands-free navigation around most of the TV’s features. However there were a few kinks I had to work around.

For instance, I only used one of the two remotes it comes with. The one I was using didn’t include access to features like recording TV shows or using the program guide. So I tried accessing the program guide using voice commands but had no such luck. However I was able to ask it to turn my volume up and down. Another problem I found was accessing certain streaming services. While I could ask it to play a particular TV show on Netflix with success, I was sad to find that asking it to do the same for Stan was chucked in the “too hard” pile.

Spotify was also one of those clunky work arounds for Google Assistant. I was able to ask Spotify to stop or start, but navigating around the app hands-free required pairing my account with Google Assistant.

Sound quality while listening to music as well as during video games and TV shows/movies was also a shock in more ways than one. An acquaintance has previously mentioned that the audio, to put it nicely, probably isn’t the best due to the brand. But I’ve shut down their claims after my experience. Set at a usually respectable volume of 30 out of the box, the TCL X10 honestly made me jump when it fully booted up. Which, fair warning, will take more than just a few seconds. As an AndroidTV, it definitely matches the Android phones in boot-up speed.

As I previously mentioned, the TCL X10 65” will set you back quite a bit. It’s a big investment being listed at $4000+ especially since many models contain almost all of the X10’s features at half the price. But as one of the first of its kind on the Aussie market, you’ll be ahead of the game for at least a few years until Micro-LED becomes both mainstream and hopefully affordable.

TCL’s X10 models plus their extended range of new model are now available at most good electronics retailers.