“Adapting a successful film franchise into a game is no easy feat. Bloober have crafted a memorable experience that will stay with you for a long time.”

Movie game tie-ins almost never work (I said almost!) Remember those horrible MCU games Thor, Captain America, Thor? Fortunately they came to their senses and stopped after The Winter Soldier and we haven’t had to experience once since. The Blair Witch steps away from being a tie in movie and marks out its own territory in the franchise. While there have been 3 previous games in the cannon, this entry marks itself completely separate from the previous ones with new characters and a story you will want to play through multiple times to explore every single possible option.

You play as Ellis, a disgraced cop who is joining a search party to find a missing boy in the woods in Burkittsville. You’re joined by your dog Bullet, a German shepherd support dog who helps sniff out traces of the missing boy and any danger lurking around the forest. While the game is mostly “open world” allowing you to explore as you please, there is definitely a case of claustrophobia as well as feeling completely and utterly alone despite having a search time contactable via your radio. When night falls and reality itself turns on its head Ellis must try and keep his head to not only rescue the boy and uncover the clues surrounding his disappearance, but also keep his head about him to make sure he survives the Black Hills.

Ellis is probably one of my favourite video game characters in the last year, actually I would go so far as to say since Henry in Firewatch and Geralt in The Witcher 3, Ellis has an incredibly interesting backstory and his shattered past that bring on frequent panic attacks that morph into the alternative reality of the Blair Witch which cause some effective what is real scenarios at several points throughout the game. This also happens if you stray too far from Bullet who acts like your emotional support dog throughout the game. It is also critical as the game moves forward that you keep him close as he points out the supernatural enemies in the dark and put you on the right path. He also has a fiery temper that explodes through phone calls to his ex wife as the story progresses. Watching him go from cool, calm and collected scout to scary, psychotic monster gives an effortless performance from voice actor Joseph May.

In relation to enemies there are two types and only two ways to get past them. One type of enemy can be vanquished by Bullet tracking them down and shining your torch directly at them, the other is a stealth requiring your character to silently slink past them, although Bullet can tear ahead as noisily as he likes with no apparent repercussions. While it doesn’t offer a huge variety of ways to get rid of enemies, this is definitely not the focus of the game. There are also a few puzzles along the way which provide some relief from the onslaught of tension and terror thrown at you as the main story progresses. A lot of it involves using a camcorder to re watch footage from previous experience that pull and put things from the footage into the reality Ellis is currently in. Fortunately where Outlast 2 failed with this mechanic, Bloober have made it an enjoyable game mechanic. Scrolling through footage and linking to the past or future and pulling things in and out of the world to get through certain areas is easy to manoeuvre. The old school 90’s cam also feels in place with the Nokia-eseque mobile phone (complete with Snake style games you can actually play!)

The frame rate does need to be addressed, due to the density of the forest it will just crash at so many points during the game (reviewed on Xbox One X) giving sluggish performance at times. While this isn’t a deal breaker, it can be a bit distracting and pull you out of the story and immersion that it is so good at building. This is really apparent in the first few hours of the game and it did improve for me as the game went on, hopefully they will release a patch that will fix this later down the track. I have heard from friends that this was not the case on the PC version and it provided a flawlessly smooth experience with no noticeable frame rate drop. Bullet is a great companion, but his command controls are extremely glitchy, so many times I told h him to seek or stay close to me and he would do the exact opposite. This also happened a lot in the first 2 hours of the game and cleared up after that (yes you can pat Bullet). 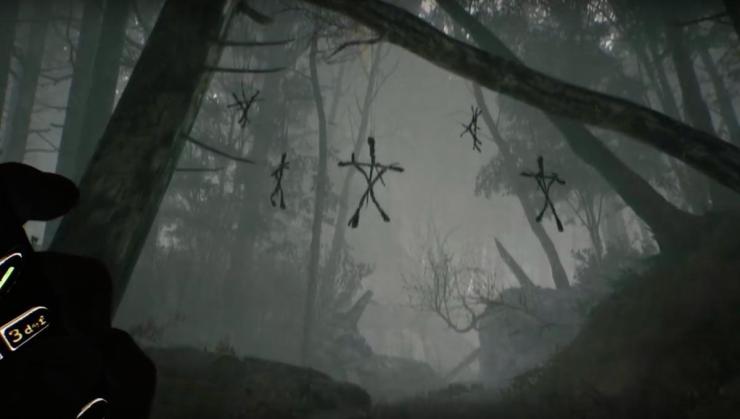 When the game reaches its horror fuelled finale it shows to be more of another tale of trauma rather than a scary story about a supernatural witch. Some fans may find this hard to deal with, although the Blair Witch elements are definitely there and present during the shack shacking finale, story wise it just feels more of a exploration about his past and why he is the way he is. For me this is the part that I enjoyed, rather than just a straight up re-hash that ended with similar moments and scenes from the films (and previous games), this offered a character with layers offering up the question what is and what is not real. The game offers multiple endings and options so once you get through the 7-8 hour gameplay, it is definitely worth going back and exploring a bit more to get those missing achievements and different outcomes. I am on my third playthrough and am still fascinated by the story and the complete surprise that was The Blair Witch. This game is best played with a pair of surround sound headphones, no lights and a support puppy.

The Blair Witch is available exclusively on Xbox and PC, if you have Game Pass you can download the game as part of this subscription.