That is the sound of a pair of high heels being walked in as they hit the cold hard ground. In this case it’s also the sound of danger. It’s a sound that is now a PTSD trigger for me that will still leave my heart racing for quite some time. This new found fear is thanks to The Coma 2: Vicious Sisters and it’s definitely not the first game to burn a terrifying memory into my brain. The latest title by Devespresso Games tells a different story to it’s predecessor The Coma: Recut. The mixture of dark environments, terrifying sounds and fun exploration this has become a new favourite survival horror title. And I’m not even a huge fan of the genre.

The Coma 2: Vicious Sisters is a 2D adventure thriller set in Korea with our teenage protagonist Mina Parks dealing with all the typical high school girl issues. But among the cattiness between her peers as well as boy issues, Mina has also had to deal with her friend being stuck in a coma for the last 3 weeks. It’s been a constant struggle for Mina as she can’t get it off her mind and even causes her to have reoccurring dreams.

The game starts off on the same day a blood moon is meant to rise. After yet another day of what feels like torture, Mina checks out the blood moon while she’s still at school. However what happens next is an unexpected nightmare that won’t be  easy to wake up from. 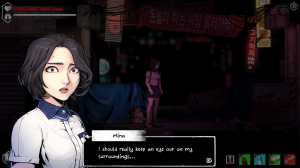 Mina finds herself on the ground in the same room she was in before mysteriously passing out. However everything looks different, It’s no longer daytime and the walls are now covered in red paint and weird plantlike growths. You eventually find out this is some parallel upside down shadow realm called The Coma. Obviously little is known about this place when you first wake up. Is this real or is this another one of her reoccurring dreams? It’s up to you to find out what’s going on and figure out how to escape.

The games pace doesn’t exactly pick up instantly. The brief moments before and after the blood moon sighting leans more towards exploration gameplay. As you explore the darker grittier Sehwa High School you learn that it’s going to take a lot more than just leaving the school grounds to escape this nightmare. I surprisingly felt okay about this, as if I had forgotten about my new frightening surroundings. That is of course until I found some well placed hiding spots and learned of one or two particular threats that lurk the corridors. With little on me and without any weapons, I wandered the school corridors trying to find supplies to help me survive. The pace picks up, I have a map that gives me direction and a dash of hope that I can escape. That is until I hear someone or something approaching. I have nothing to defend myself except maybe the one only bottle of mace I’m allowed to carry. It became obvious this was going to be one long night of playing Hide and Seek.

The Coma 2: Vicious Sisters gave me some heavy but watered down Resident Evil vibes which I’ve constantly craved since the RE 2 remake last year. The gameplay mechanics are very similar. You search different locations for clues and a means of escape. This also means certain items or passage ways are usually behind a locked door. Except you’re not entirely alone on your journey. You’ll bump into both familiar and not so familiar faces who’ll help you out. But they’ll also ask you to do some favours for them. If you scratch their back, they’ll scratch yours. However the objectives in The Coma 2: Vicious Sisters are very linear. You can wander off and enter a room with absolutely nothing of interest inside and pass it off as an empty design space. But it’s not until you talk to an NPC or pick up an important note that the object will activate. A part of me wishes this wasn’t the case. I get excitement out of collecting items and clues and trying to guess what goes where. Like putting together pieces of a puzzle. The scripted nature however retains only some of this edge of your seat anticipation. This also placed a random thought into my brain about speed runs. Does the efficiency drop since you can’t collectively pick up items and must do it in a strict order? Obviously this isn’t a note to criticize nor is it something the developers usually think about. That’s also not to say I didn’t enjoy this part of the game. As linear as it was I love the exploration aspect. Even if it means I’m being hunted as prey at the same time. 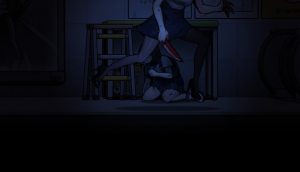 There are a few dangers to worry about but are also pretty tame. But that’s until you hear her coming. You’ll know when, even if you’ve never heard her signature noise. Your body will react accordingly. This isn’t going to be like Mr. X in RE 2. You can run but you must hide. I only ever got away from her by chance without hiding on one or two occasions. But she stays hot on your heels quite easily so knowing your surroundings is essential. The chase is an adrenaline rush but terrifying at the same time. In an instant the fear factor gets cranked up to 11. But it’s not the chase that got me the most. It was the build up. You know they’re there. Pacing the corridors stalking you out. There were moments I thought I was safe but she was a lot closer than I had expected. The screech that comes out of her next will stay burnt into my mind for some time. The further you progress the more challenging it becomes. Not so much in regards to gameplay difficulty but you’ll have to be more careful with your decisions. All I can suggest is use wisely and save often. You don’t exactly have weapons so all you can really do is run, hide and hope for the best. There are crafting stations available to create traps, etc. but it is possible to make it through the game without them.

Through out The Coma 2: Vicious Sisters the audio stands out more than the visuals in regards to setting the tone. As I mentioned earlier, the sound of high heels becomes terrifying after playing this game. I’ll probably start running if I hear them coming up a corridor IRL. There are also some gruesome visuals both in-game and in comic book-like cutscenes. I didn’t find them overly terrifying personally but they will scare the faint of heart. It was more so the darkness of the environments mixed in with sounds of the unknown that had me scared. There are also multiple locations outside of the high school to explore varying a police station to a giant hospital. 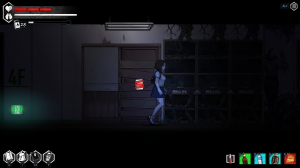 Just like the shadow realm in The Coma 2: Vicious Sisters time will pass a lot slower IRL than you think. My playthrough lasted roughly 6 hours which seems like a short amount of time. But with the adventure that I had just gone on, that 6 hours felt a longer and was well worth it. There are plenty of collectibles still out there which I’m tempted to go back for. As far as I know there’s only one path you can go down in this game. But a part of me wishes there were multiple endings to explore. There’s a lot of lore within the game to cover which is somewhat hard to explain without spoiling too much. All I’ll say is I hope that another installment comes out soon.

DLC for The Coma 2: Vicious Sisters has also just been released prior to this review going live with 3 new character skins being made available.

The Coma 2: Vicious Sisters has further convinced this self confessed sook to start playing more survival horror games and fans of the genre should definitely give this one a go.

The Coma 2: Vicious Sisters is available on Steam and GOG and I give it 9 out of 10.