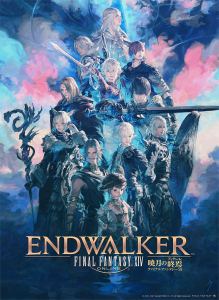 This past weekend, Final Fantasy XIV Online fans from around the world came together for the annual Final Fantasy XIV FanFest. However due to the pandemic, this years FanFest wasn’t like other years with the event being broadcast live on Twitch and YouTube instead. While it was a digital-only event, FanFest was a blast to attend over the events two day run.

There were a plethora of different segments across both days, including a keynote address and Live Letter with Final Fantasy XIV Online’s Director and Producer, Naoki Yoshida, as well panels, interactive segments with fans/content creators and live entertainment.

One of the main highlights from Day 1 of FanFest was the Keynote Address. Yoshida, aka Yoshi-P, kicked off FanFest 2021 with a plethora of information about Final Fantasy XIV’s newest expansion, Endwalker, which launches on November 23.

Included in the keynote address, Yoshi-P revealed the 2nd new job coming to Endwalker, the Viera race becoming available in male form, news of an OCE Data Centre, new & colourful locales to be explored and the multiple/specific editions of Endwalker available at launch.

Day 2 however felt a little more exciting, even there weren’t as many Endwalker announcements as there were on the first day. A special Live Letter with the Producer was held, hosted once again by Yoshi-P. While there were some fans expecting to hear more about Endwalker, the Live Letter instead covered details about the upcoming Patch 5.55.

Following the Patch news was a showcase of new merchandise available to most fans around the world. I say most since one in particular is exclusive to Japan while some may be tricky trying to buy from Australia.

Along with announcements, there were also Q&A’s, panels and interactive activities with fans/content creators. Musical performances also took place at the end of both days. Day 1 included the musical stylings of pianist, Keiko, with Day 2 wrapping FanFest up with Final Fantasy XIV Online’s favourite rockers, The Primals. Entertainment coverage for both days can be found here.

For a digital event, I had an absolute blast! FanFest 2021 didn’t just feel like we were fed a bunch of information during a live broadcast, but it felt like the IRL event we were meant to get. The entertainment value was top notch and for the fans to still be able to interact in chat, personally ask the dev team questions and enter the cosplay contest was amazing. We were all still able to come together as community and have a fun weekend. It may not feel as memorable as an IRL event would but I wouldn’t call it the worst event either.