TRIPLE Threat has become the focal point in NBA 2K21 which starts its 8th season today. Titled “Trial of Champions”, Season 8 will run for 6 weeks kicking things off with the Game of Rings. Game of Rings is week and a half long test to see who out of 6 specially picked NBA stars have what it takes to come out on top. 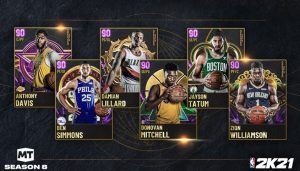 Every player is given six special Trial of Champions cards to use in Triple Threat matches up until June 15. Anthony Davis, Ben Simmons, Damian Lillard, Donovan Mitchell, Jayson Tatum and Zion Williamson have been picked to essentially compete against each other. The best performing of the 6 will have a large hand in the outcome of the Game of Rings in terms of player rewards.

The entire community will win a player locker code, including Galaxy Opals or a Dark Matter player. However its contents will depend entirely on those who performed best. From what we can gather from the full Court Report, this is just one of more “games” to come. But the team are keeping pretty tight lipped about what’s to come.

What we do know is that this seasons Level 40 reward is an Invincible Luka Doncic Dark Matter card. Dark Matter Bob McAdoo can also be yours at level 33 and an Invincible Moses Malone is up for grabs by earning six rings in Limited. The Dark Matter rewards don’t stop there either with Dark Matter Robert Parish, Tom & Dick Van Arsdale, Drazen Petrovic and more can be earned through all MyTEAM modes. A non-Dark Matter Trae Young is also up for grabs this season just for playing MyTeam everyday during the first week.

Season 8’s signature challenge focuses on Kevin Durant’s 31 points and four threes leading up to his first NBA Championship. Pull off the same feat as KD did for a Hall of Fame badge and Diamond Shoe.