The Gardens Between Review

“The Gardens Between is a fantastic puzzle game that’s not too challenging and very rewarding both in its gameplay but also the childhood memories being played through.”

The Gardens Between is a clever and relaxing puzzle game by Melbourne-based Australian indie developers The Voxel Agents. It was released on September 20, 2018 on all major platforms. I discovered this game through Xbox Game Pass and it’s one of my favourite games from 2018.

The opening menu screen shows a suburban scene with two houses located near a train line. It’s raining at night time with an occasional clap of thunder and you can see a path in the middle of the screen leading to a communal backyard with a picnic table, slide, rocking whale and a treehouse. Despite the gloomy look, it feels warm and welcoming. The camera moves along the path up to the tree house where we see a boy, Frendt, and a girl, Arina, who have sought shelter from the rain in their treehouse. 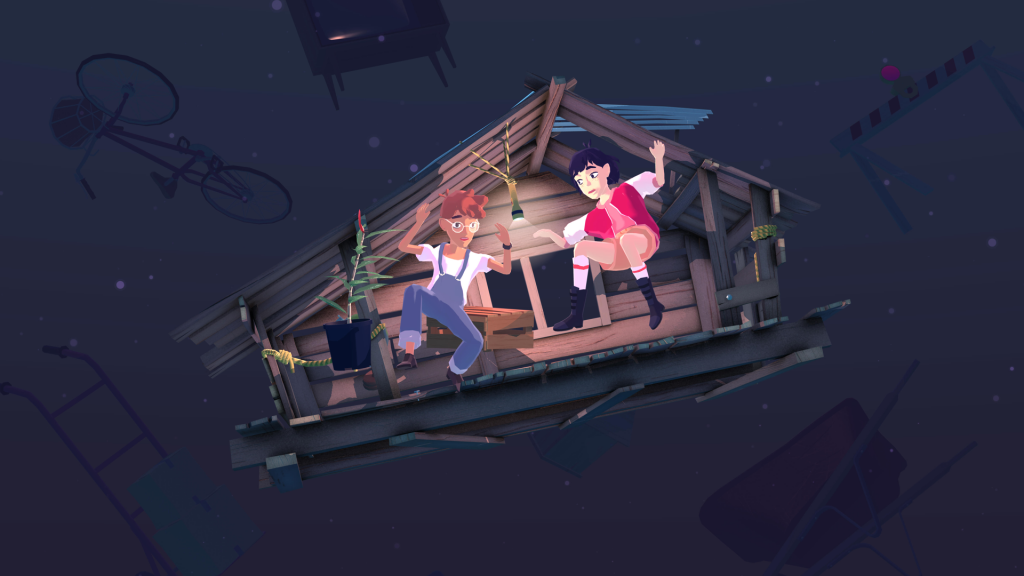 They are sitting quiet listening to the rain when a clap of thunder sounds overhead and everything around them seems to stop in time, then reverse with lines of light converging in between the two forming an orb of light. Arina reaches out to touch the orb and suddenly the treehouse starts falling. The screen turns dark and the next scene shows a small island garden with Frendt and Arina on a beach outside their treehouse. As the scene unfolds, two boxes are tumbling from the sky with a plane and a cricket ball falling out of one of the boxes.

As you take control of the game and prompted to move the controller stick to the right, you see that as you move the characters forward, the boxes that were suspended in mid-air start falling, crashing to the sand and spilling the contents onto the beach, blocking you from moving forward. You then move the controller stick to the left which rewinds time moving the boy and girl back to their initial position lying on the sand. The camera continues rewinding backwards which also lifts the boxes up into the sky. The camera continues to pan around the island as you see pieces of the scene ‘fitting back together’ with two stone pillars around a small column and then the orb of light reappears.

The orb settles itself inside a transparent lantern perched atop a square stone piece. The camera then pans back to focus on Ferndt and Arina on the sand. You take control once again and this time as you move forward, the boxes land in the water allowing you to move past them. This is your first experience in manipulating time which can also manipulate the environment around you in a given scene. Arina walks ahead of Ferndt and she can pick up the transparent lantern with the orb from the stone square. They then hold hands as they walk up some steps together to place the lantern onto the small column between pillars. The orb shoots up into space showing an image of a box labelled Arina’s Room with the toy plane and cricket ball we saw earlier. 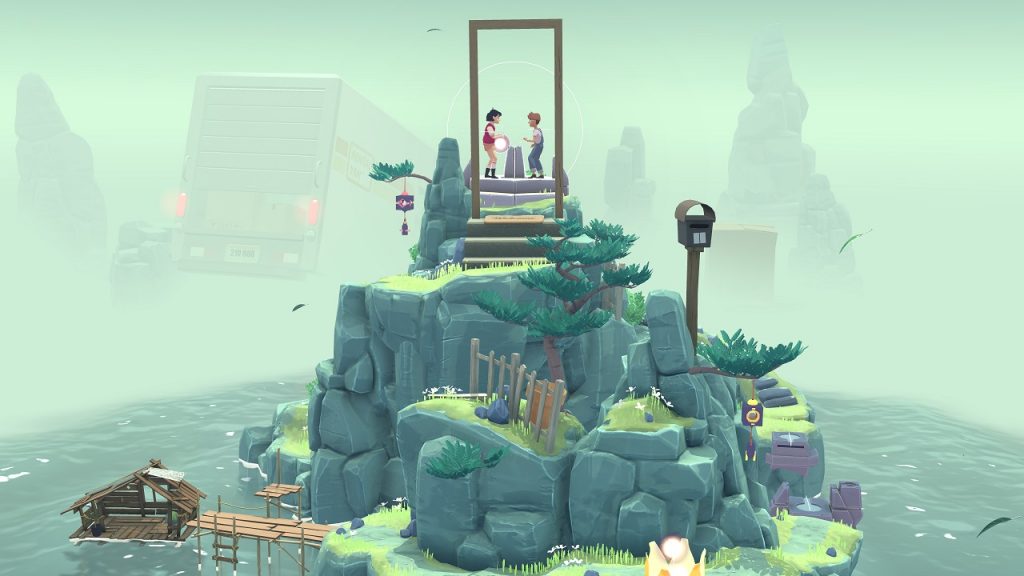 This small introduction to the simplistic gameplay, along with the soothing music by composer Tim Shiel had me hooked. This is a great game that I can safely play with my 2-year old daughter Charlotte watching without me having to worry about the content being rated too highly for her. There are times between dinner, bath and bed where Charlotte is tired but is fighting sleep, so when we’ve read her favourite books a couple of times each and she’s still resisting sleep, I’ll play on the Xbox in the theatre room with the lights dimmed and Charlotte lying in her little couch bed next to me.

It was comforting for me knowing the content she was watching was child friendly without being something like the Wiggles that will get her too excited to sleep at this time of evening. The Gardens Between was perfect for these moments where I’d play for anywhere between 15 to 45 minutes; enough time for me to notice my daughter relaxing into that pre-sleep state, allowing me to pick her up and take her to bed without screams and tears.

The next couple of levels introduce you to different game mechanics, all to do with manipulating time and objects on various island gardens. Ferndt can use a hanging yellow lantern which opens and closes a yellow flower cube, producing a light orb which Arina can walk past to pick up in her lantern. Alternatively using pink lanterns opens and closed pink flower cubes which contain a dark orb that will consume the light within Arina’s lantern if she gets too close. If the orb is taken, you need to reverse time or go forward to a point where she can pick up the light again or create a new one. The orb can also clear a fog blocking the way, but sometimes can make fog bridges disappear, so you need to work out how to get rid of the orb, cross the fog bridge and then reacquire the orb to complete that level. 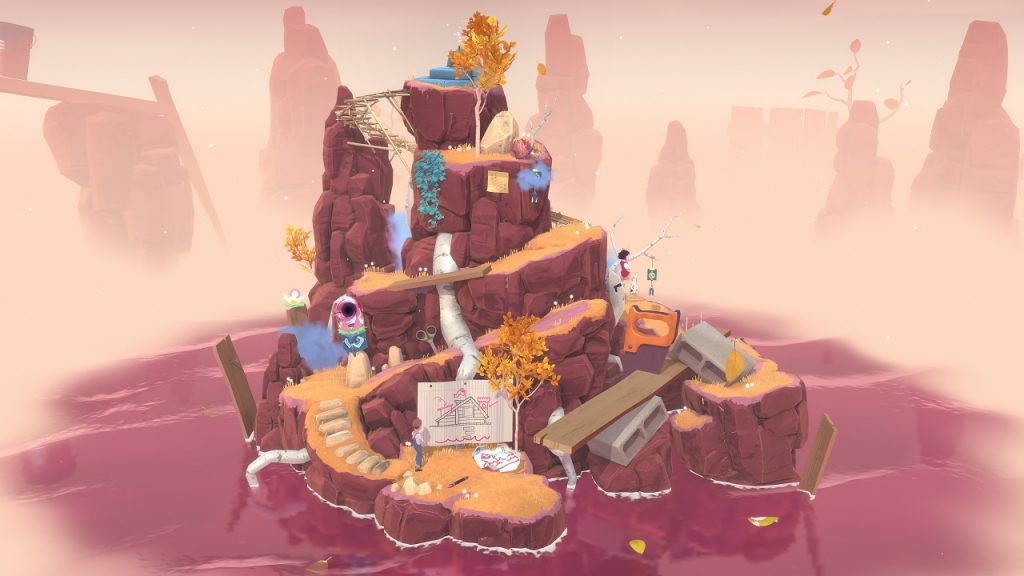 In certain levels you can manipulate a saw cutting through wood with Arina jumping onto and off the saw by rewinding and forwarding time as the saw cuts through the wood. In another scene, some logs and debris travel through water and if stopped at a certain point in time will create a bridge for Ferndt and Arina to cross. Other scenes have you moving time forward slowly, pausing to cause a lightning bolt to grow and crack through a stone blocking your path, or manipulating graffiti objects on a wall to place the empty lantern in a spot that allows the light orb to be attracted to it. At times I was going too fast through time and missed some of these subtle yet deliberate changes in the environment. It wasn’t until I slowed down that I noticed these things which then put a smile on my face as the solution clicked in my mind. 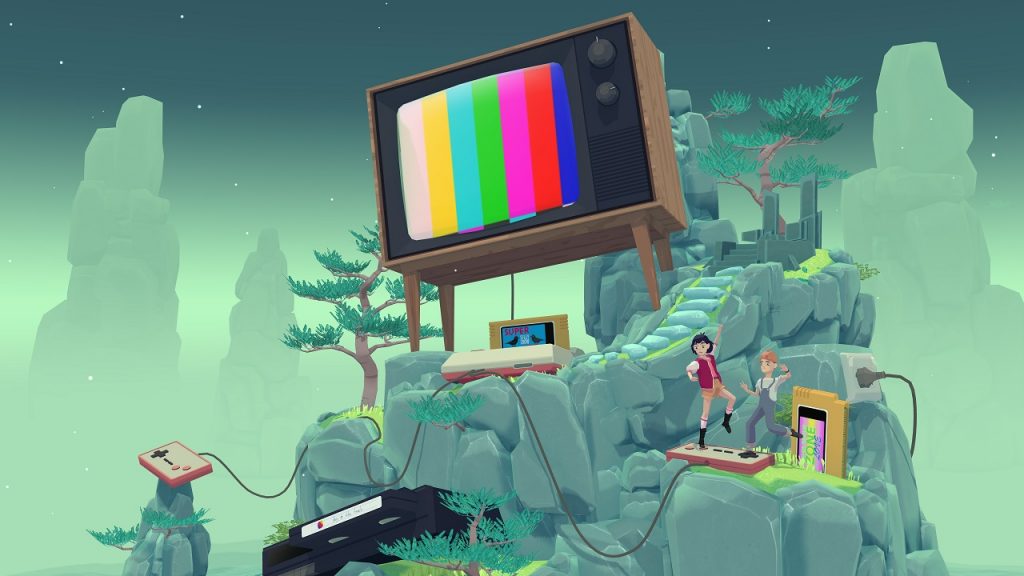 There are 2-3 themed levels based on groups of memories Arina and Ferndt shared together, with around 20 levels total before the final multi-level puzzle. It combines everything you’ve learned over the course of the game, climbing up through the clouds to complete their final memory together. When the game finishes all too quickly, watching the final scene gave me a sad by heart-warming feeling of nostalgia as I remembered some of my own childhood memories shared with my next-door neighbour. It was a great way to close the story but left me wanting more puzzles to solve.

Overall, I gave this game a 9.5/10. The Gardens Between is a fantastic puzzle game that’s not too challenging and very rewarding both in its gameplay but also the childhood memories being played through. The clever use of time manipulation, both in moving Ferndt and Arina back and forth and manipulating objects within each memory, was a masterful touch. There’s no shooting, violence or talking, it’s just simple gameplay coupled with Tim Shiel’s great music creating a very chilled few hours of glorious gaming.

This review utilised the Xbox version of the game with 4 hours of gameplay. The Gardens Between is available now on all major platforms and is rated G for all ages.