WHEN a video game launches, the choices of what to buy are usually pretty standard across the board. You have your standard edition, your collectors edition and your super duper limited collectors edition which set you back a few hundred dollars, with most of these being available in both physical and digital versions. But Final Fantasy XIV Online’s latest expansion, Endwalker, will be launching a little differently.

During Day 1 of the 2021 Final Fantasy XIV Digital FanFest, Director and Producer of Final Fantasy XIV Online, Naoki Yoshida, hosted a 2 hour-long keynote presentation discussing a plethora of information about the upcoming expansion.

Before revealing the expansions launch date of November 23, Yoshida, aka Yoshi-P, discussed the many editions that will be available for pre-order and on launch day. But it seems as though there are versions that may or may not be right for you.

Right off the bat, Yoshi-P revealed that Endwalker will not have a physical disc version. This is the first time an expansion has been made completely digital, but Yoshi-P noted that it was right decision to make. Yoshi-P revealed that 85% of players had purchased the game digitally, which is quite the comparison in regards to physical sales. 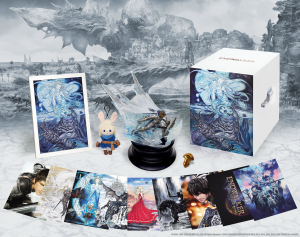 While Endwalker is only available digitally, some physical editions will be made available but will have a download code included. Along with the usual standard edition, a Collector’s Edition is also available which include physical goodies such as an Azam pin, Paladin figure, Art Collection & Frame Set and Loporrit Mini Plush. All of which come inside a special Endwalker Art Box. Digital goodies are included too including a new mount called Arion, a glammed up version of the Death Scythe from Final Fantasy XI and Porom wind-up minion.

The Endwalker Collector’s Box only contains the physical bonus items you’d get from the standard Collector’s Edition. But the Collector’s Box doesn’t come with the game either. Which was a little confusing at first as to why they’ve done this.

However Yoshi-P explained that the reasoning behind this is that the Collector’s Edition is only available for PC/Mac meaning that Playstation players would have to buy the game again just for the collectibles. But the Collector’s Box is the perfect alternative for those who don’t want to pay for a version of Endwalker they won’t use plus the physical and digital collectibles. The Digital Collector Edition is also available for Playstation players.

Pre-ordering Endwalker will get you even more bonus goodies, including early access, Menphina Earring and Wind-up Palom Minion.