The NBA Crosses Over With Fortnite

BASKETBALL fever has reached Fortnite as the NBA partners up not just for a crossover, but The Crossover. Ahead of the NBA playoffs, all 30 NBA teams will be represented in Fortnite during The Crossover event thanks to the addition of team uniforms and other cosmetics.

Fortnite x NBA: The Crossover officially begins today kicking off with the Fortnite xNBA Team Battles. From now through until May 24, players can sign up with their favourite NBA team, complete challenges and score points for their team. There are prizes for 1st, 2nd and 3rd with members of the winning team taking home 500 V-Bucks each and The NBA Championship Trophy Back Bling. Be quick though as there are only 15,000 spots per team available.

Players will be able to support their favourites outside of Team Battles as of 10AM AEST on May 22 when the In The Paint outfit set becomes available. Mini Hoop Back Bling and the Hookshot Emote are also available in their own separate Shoot & Score Pack which can also feature any 30 NBA logos. And be sure to find someone else who has the same Back Bling so you can make a shot on them!

Also, look out for special items in the Item Shop next week hand picked by NBA All Star guards Donovan Mitchell and Trae Young. 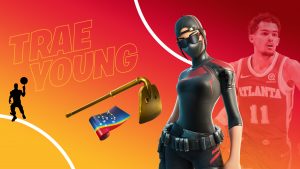 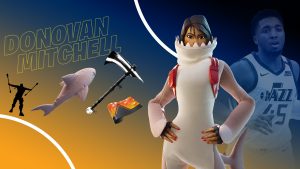 IF the NBA has added anything to pop culture these days, it’s two things, shoes and Hip Hop. Well, today…