Whether you’ve been with us since the beginning, or listened for the first time last week, you’ll know that we only have one enemy on the Game On Australia podcast.

Now, it’s nothing to do with politics. We’re completely cool with whatever political persuasion people choose to lean to.

What we most definitely ARE NOT cool with is the shit internet speed here in Australia.

Poor old Pete only lives 20km’s from our capital city of Perth, yet he’s still on ADSL2. In 2017, he’s still on an outdated technology.

Me, on the other hand… I’ve been on the NBN, Australia’s future of Internetivity, for a year. My suburb was one of the first to implement Malcolm’s FTTN, connecting to my house via very, very old copper wire.

So much so that every now and then, I tweet publicly my disdain to both NBN Australia and my particular provider, Optus

Unfair to @NBN_Australia as I should tag my provider, @Optus as well. If I was doing this content at work, would have been done 25 mins ago https://t.co/QEO2N8yH6p

Now, I’m not here to bag either one overtly. I’ve actually had good customer support from both.

However, a recent slow down at home, at the same time as it always happens (around 6pm at night), led to this tweet by yours truly.

I wasn’t even gaming (yet). My three kids were trying to stream Stan via a @Telstra TV box.

The buffering was, quite simply, f*cking disgusting! I was disgusted!

Anyhoo, after some DM’s, I got this reply from Optus. I’ve blanked out the guy’s name because he was actually very helpful to me, and I don’t want the shithouse nature of the actual message to reflect on him. 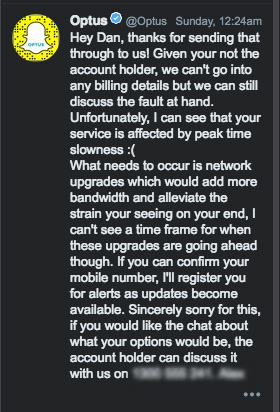 Have a read of it and say it with me…

How can a technology that’s meant to be at the forefront of the next generation of Australia’s communication and online everything:

I don’t blame Optus, and I don’t even blame the NBN.

I have lost faith in the NBN and our future Internet speeds, which affects my everything. My job, my home life, my kids and, let’s not forget, my gaming!

Fingers crossed that an upgrade happens sooner rather than later, and that this NBN, our future for online, starts to show what it can do.