The Outer Worlds: Murder On Eridanos – The Nintendo Switch Review

2019’s The Outer Worlds quickly became a favourite of mine in the RPG category. It ticked multiple boxes with it’s deep character customisation, humorous dialogue and intergalactic setting. Though it did fall short in the quest category, burying me in a pile of side quests to the point where I’ve forgotten all about the main story objective. And if you get rid of all the side stuff, you’re looking at a short campaign.

The path I chose during my first playthrough on Xbox One (Thank you, Game Pass) was a hacking, lockpicking and smooth talking space captain. But I wanted my 2nd playthrough to be quite different. Perhaps a violent barbarian of sorts with strengths in melee combat.

This didn’t come into fruition though as my 2nd playthrough would be delayed until the Nintendo Switch launch of The Outer Worlds 2nd expansion, Murder on Eridanos. And due to the subject matter, I wanted to keep my smooth talking ways handy instead of being aggressive.

Before I go on, this expansion isn’t brand new. It follows the delayed footsteps of both the base game and 1st expansion being released on Switch months after every other platform.

Murder On Eridanos introduces us to a brand new story arc, locales, characters and weapons. Its story opens with the murder of a famous Aetherwave show character, Halcyon Helen AKA actress Ruth Bellamy. And as a space captain with hardly any experience in the detective field, you’ve been hired to investigate her murder. 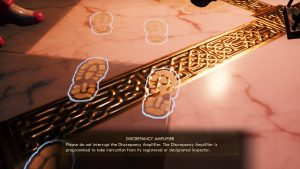 With the help of a new clue finding gadget and multiple dialogue choices, you fall into the new job title effortlessly. Murder On Eridanos plays out like a classic murder mystery with suspects to question and clues to look for. However the latter seemed to have fallen shorter than expected.

The “Discrepancy Amplifier” is one of the new weapons, if you can call it that, made available in this expansion. Apart from dealing extremely low damage, this humorous talking gadget notifies when there are hidden clues nearby. Initially I was excited about this gameplay mechanic. However, I would of loved to have used it more so for crime scenes instead of tracking down footprints.

For the most part, you’re solving this murder mystery by talking to suspects, who either have strong opinions about Halcyon Helen or have been up to something suspicious. Having high pre-existing skills in persuasiveness, lying, etc. as well as knowledge in science and medicine helped as expected. But judging from the other dialogue choices, I probably would of had the same outcomes even if I was a meat head barbarian.

What I wasn’t expecting though was how the game allows you to make an accusation at any time during the questioning quest lines. It makes the whole investigation process feel less forced. Although I personally wanted to be as thorough as possible and questioned everyone.

Murder On Eridanos takes place on the newly introduced planet of the same name. It’s also home of a familiar in-game Outer Worlds food brand, Rizzo. Since this is a planet made up of gas, the inhabitants of Eridanos live upon floating landscapes. 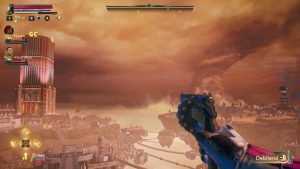 The overall design isn’t much different from what we’ve already seen in The Outer Worlds. However I thoroughly enjoyed the change of landscape. It reminded me of the floating city of Columbia in Bioshock Infinite, but dirtier and industrial.

While it’s mostly populated by civilized folk, it still inhabits dangerous enemies. Combat is obviously still a factor but didn’t feel overly present. And when it was present, it was in small spread out batches. While I am aware that this is an RPG and not a shooter, Murder On Eridanos seems to focus on being more about crime solving than action.

Like most other expansion campaigns, Murder On Eridanos only takes a few hours to get through. It didn’t feel like it ran for too long, nor would it of needed to be any longer. And unlike the base game, it doesn’t distract you with a lot of side stuff either.

While this isn’t my first intergalactic rodeo, it’s the first time I’ve played The Outer Worlds on Nintendo Switch. It’s not my first AAA Switch port either so I went in with certain expectations. In comparison to other platforms, it hasn’t got the most polished visuals. Mainly when it comes to finer visual details of character models and objects from afar. But after a few hours, I was able to look past this flaw. Mostly due to my enjoyment of gameplay overall.

The loading times are The Outer Worlds’ other downfall when playing on Switch, which can feel longer than normal. But for the most part, I was able to play this with almost as much enjoyment as I did the first time on Xbox. And sometimes from the comfort of my own bed. Motion controlled aiming is also the best I’ve experienced on the Switch in years.

Murder On Eridanos does the job for what it is, offering a few extra hours to a solid RPG title. It tried to do something different with the murder mystery element but it could of executed certain mechanics like character skills and clue searching a little better.

Murder On Eridanos is available now for The Outer Worlds on Nintendo Switch and all other platforms.