As a player who started in 2.0, the WoL’s job as an Archer is a little more forgetful. It was also unexpected as I’m used to seeing him being a rough and tough sort of character. To me he’s always been a melee character in the middle of all the action, not off to the side dealing damage from afar. I’m not saying that Archer’s are trash, but I’m glad that his job eventually changed.

While WoL was represented as a ranged DPS during 1.0, he ended his time in 1.0 as a Warrior. Before the 1.0 servers had shutdown for good, a cinematic played show the Bahamut breaking out of the Dalamud, causing the Calamity that wiped out the realm. Which is where 2.0 came in as “A Realm Reborn.” I liked to think of the Warrior as WoL’s default job as it’s how I’ve always seen him. While being in love with his armor and aesthetic as a whole, I never leveled a Warrior far enough to obtain the same gear he wears in cutscenes.

In Final Fantasy XIV’ Online’s first expansion Heavensward, our Warrior of Light put down his axe in exchange for a polearm. The threat of Nidhogg caused WoL to have a change of heart, switching from being a heavily armored Warrior to a fast-paced Dragoon. Now Dragoons have never had the best reputation on Final Fantasy XIV Online as they’ve always been referred to as “floor tanks.” While they can be powerful, some don’t last very long in battle. However, WoL makes Dragoon look gooood in Heavensward’s opening cutscene and has probably been the only time I ever wanted to take up the job myself. Apart from the Warrior armour in 2.0, this Dragoon armour set is one of the coolest that WoL has ever worn.

The second expansion, Stormblood, brought a very eastern feel to Final Fantasy XIV Online. When Stormblood was announced, we saw that WoL’s job had changed once again. This time as another fast-paced damage dealer, Monk. However, WoL didn’t stay a monk for long. Later he was represented in promotional material as a Samurai, one of the new jobs introduced in Stormblood. Of the two, I preferred him as the latter. The new aesthetic was a big change from previous jobs, but he somehow suited it at the same time.

After spending four years rolling as DPS jobs, WoL returns to his tanking roots for the third expansion, Shadowbringers. Introduced in Heavensward, the Dark Knight has nothing to do with Batman. Yet he wields one of the biggest weapons in Final Fantasy XIV Online. While I would have preferred the path that the previous expansion followed by represented him as a newly introduced job, the Dark Knight fits in with Shadowbringers aesthetic. 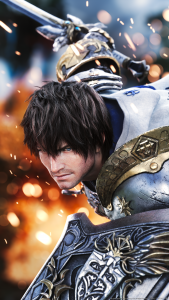 As far as we know the Paladin is the Warrior of Lights latest job. There are multiple undisclosed new jobs being introduced in the Endwalker expansion. Whether the WoL sticks with Paladin for the entirety of Endwalker is uncertain. Personally, the Paladin is another default representation of the game as both an OG job role as well being my first main in 2.0.