“The Swords of Ditto: Mormo’s Curse contains characteristics that make it stand out instead of feeling too much like a link to another franchise”

Waking up on an island to find the powers of an ancient sword bestowed upon me to use against an evil witch felt a little familiar. It wasn’t right on the nose but it already felt like it contained striking similarities to another popular video game. But as I played on I found that The Swords of Ditto: Mormo’s Curse contains characteristics that make it stand out instead of feeling too much like a link to another franchise.

The Swords of Ditto might sound familiar by name. That’s because this indie title developed by Onebitbeyond and published by Devolver Digital was originally released back in 2017. Mormo’s Curse however expands on the original while slightly tweaking its gameplay.

As this was my first Swords of Ditto experience, I was unbeknownst to what would truly lie ahead of me. The evil witch Mormo has returned to the land of Ditto once again as she does every 100 years. Being blessed with the powers of the almighty sword, you’re given the task of ridding Mormo and the dark evils she’s spread across the island. This does come with some preparation though. I may have the sword but against Mormo it’s pretty weak to begin with. 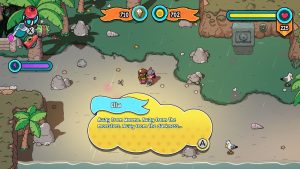 With sword in hand I set off on my adventure through this cute colourful world and instantly fell in love. The audio and visuals were one of the main standouts of my experience. Swords of Ditto feels like something straight out of Cartoon Network with its similar 2D animation aesthetic. Evil may have been lurking but it succeeded in putting me in a happy place at the same time. Characters,objects and environments interact with each other almost seamlessly making it flow like a single animated piece. However without sounding entitled I did constantly come across longer than expected waiting times when moving between areas and rooms. As petty as it sounds I only found this to be an issue since the other half of the load times were almost instant.

As previously stated a lot had already felt familiar including most instances and gameplay mechanics. As I explored Ditto’s visual variety of areas I came across a plethora of different enemies. The wide variety of enemy types made for more engaging and less tedious encounters that come with a bit of a strategic approach. Along with my sword I had a variety of purchasable “toys” to play with that work in different ways. From high damage output to stun abilities, mixing these into combat made some encounters not only easier but more fun. Reviewing the game on Nintendo Switch, I was very satisfied with the fluidity of switching equipped toys and using health items mid fight. 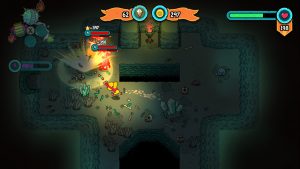 As I sliced, stomped and slammed my way through enemies, my sword slowly became more powerful. This wouldn’t just help to fight Mormo, but also everything in between. Ditto is an open playing field with almost no barriers but areas do come with set difficulties. With that said, it became almost a cake walk once I figured out how to efficiently take them down.

Ditto is also filled with many caves to explore that mostly act as mini-dungeons. These are useful for for finding loot and gaining an added boost to your sword level. Unfortunately they’re nothing too memorable. They do also include puzzle solving elements but its a lot that we’ve already seen in the past.

Once my sword reached Mormo’s difficulty level, which didn’t take very long, I made a bee-line for her castle. I came, I saw, I was defeated. My progress, the items I’d collected, all of it was lost. Falling to the fight against Mormo adds on another 100 years of darkness over Ditto and takes you back to the beginning as a new character. Swords of Ditto may look like your typical adventure RPG title but it’s actually a rogue-like hybrid and fits in well with the storyline.

This lead to spending more time making sure I was fully prepared for my next Mormo encounter. After collecting more Toys and better Stickers, which is the in-game term for gear, it only took a couple more respawns to defeat Mormo for good. The events that follow are very different to those in the original release of Swords of Ditto due to poor reception from players. 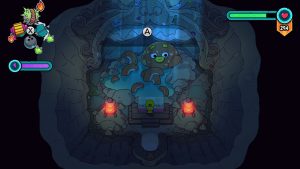 New less punishing endgame content replaces the original post Mormo events and permadeath mechanics. However you’re essentially doing the same thing all over again but with a solid chunk of difficulty included, kind of like a New Game+. Without spoiling too much, it adds a heart racing mechanic from a game I’ve previously reviewed. This time around you only lose some loot at death instead of all progress. If the difficulty becomes too much you don’t have to to go it alone. 2 player co-op allows a friend to join in on the adventure.

The Swords of Ditto: Mormo’s Curse isn’t the longest rogue-like game I’ve played but it’s definitely different from those I’ve experienced in the past. The cute innocent world is so easy to fall in love with and is perfect for gamers of any age.

The Swords of Ditto: Mormo’s Curse is available now on Nintendo Switch, Steam and Playstation 4 and I give it 8 out of 10.