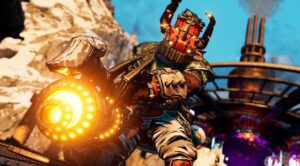 The Borderlands spin-off inspired by the popular Borderlands 2 DLC, Tiny Tina’s Assault on Dragonkeep, will finally be available on Steam later this week. And as a special bonus, Tiny Tina’s Wonderlands is also be on sale for Steam members.

Available in both a Standard and Chaotic Edition, Tiny Tina’s Wonderlands will be on sale in the Steam store from launch at 3AM AEST on June 24, until July 8. A Golden Hero Armor Pack is also available for players on Steam until July 7.

The Chaotic Edition of Tiny Tina’s Wonderlands comes with the Dragonlords Pack (featuring a plethora of character/weapon cosmetics), Butt Stallion Cosmetics Pack, Season Pass, all four Mirrors of Mystery DLC’s and the newly announced Blightcaller class, which will be available later this year. The Blightcaller class is described as shaman-like, with the ability to use elemental damage and spirits to take down enemies.

The launch of Tiny Tina’s Wonderlands also coincides with the release of its second DLC, Molten Mirrors, which also launches on the same date. This new DLC introduces players to a new threat, Fyodor the Soul Warden. Molten Mirrors will also introduce new weapons, cosmetics, and gear.