“The aim was not to lock you into specific classes but give you some flexibility to build the character to your playstyle, and this was something that stepped Titan Quest above the rest at the time.”

Titan Quest is an action RPG developed by Iron Lore Entertainment and published by THQ in 2006 for PC. It was then released on Steam in 2007 shortly after the Immortal Throne expansion had launched earlier that year. An Anniversary Edition of the game was released in 2016, followed by a brand new expansion, Ragnarok in 2017. The game was ported to Xbox and Playstation in March 2018, and Titan Quest will grace the screens of the Nintendo Switch this year!

Titan Quest was released after a slew of games were penned ‘Diablo-clones’ and ‘grandfather arpgs’ after Diablo II released in 2000 (and thankfully the Y2K bug didn’t affect our gaming!). Games such as Divine Divinity and Dungeon Siege in 2002, Sacred and Beyond Divinity in 2004 and Dungeon Siege II in 2005, really set the tone of the hack-and-slash action RPG genre. Whilst great games, Diablo II still stood out as king of these times, especially when coupled with the Lord of Destruction expansion. That was until Titan Quest came along and gave it a good run for its money. 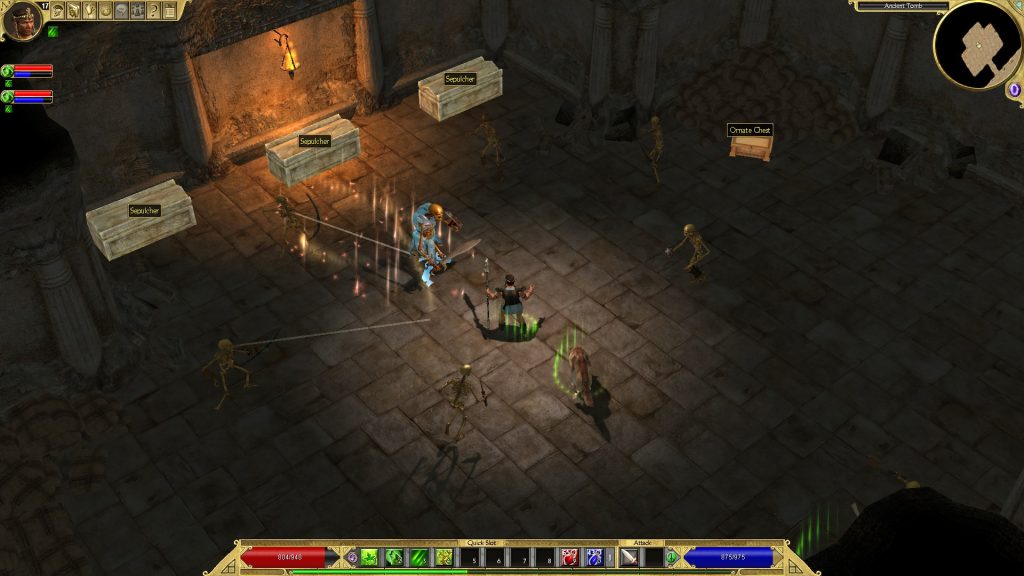 Iron Lore Entertainment had huge personnel assets in Brian Sullivan, who developed the highly successful Age of Empires games, and Randall Wallace, who wrote the screenplay for the movies Braveheart and Pearl Harbor. Together they envisioned Titan Quest set in Ancient Greece, like 2002’s Age of Mythology theme. Rather than a movie telling the story through the main character, Titan Quest told its story through the side characters, NPC’s in each of the towns giving side quests along with the main story quest. 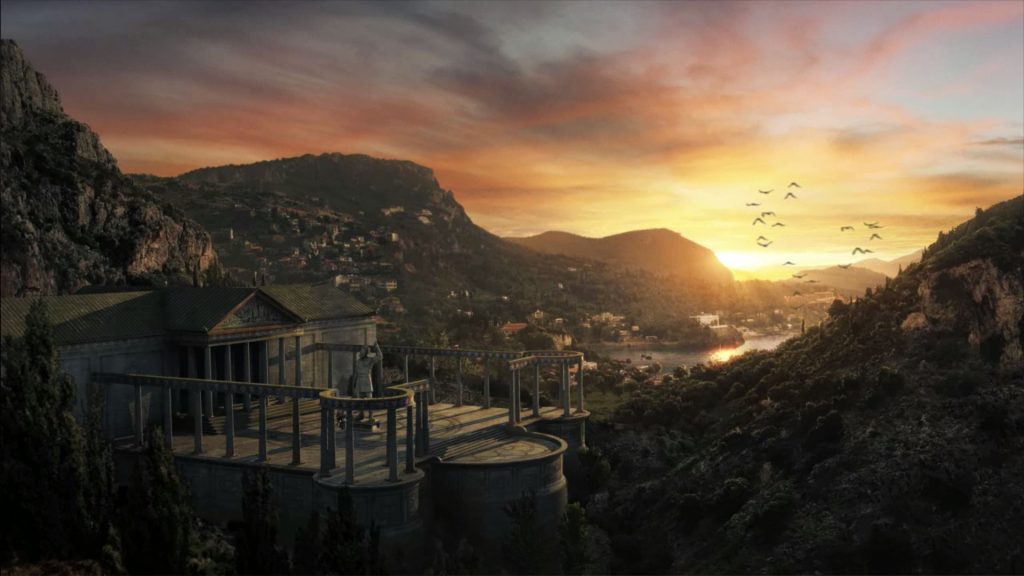 Titans once ruled the world in darkness, until the Light of Olympian Gods, after the Great War, exiled the Titans. A trio of lesser Titans known as Telkines broke the communication conduit linking Olympus with the mortal world, and summoned armies of monsters to terrorize the world and prepare for the release of the Titans. You fight your way through Greece, Egypt along the Silk Road to China trying to defeat the three Telkines and restoring peace to the lands. The music and environmental sounds were matched to the locations you were in at the time and the style of monsters fit the Greek, Egyptian and Asian influences as you moved through the story.

Character creation consisted of simply entering a name, gender and a choice of 5 tunic colours, and that’s it. There was no class selection, so armed with a simple sword, you begin your quest at the village of Helos. It’s not until you gain enough experience for your first level up that you open the Mastery system and commence the skill customisation of your character. 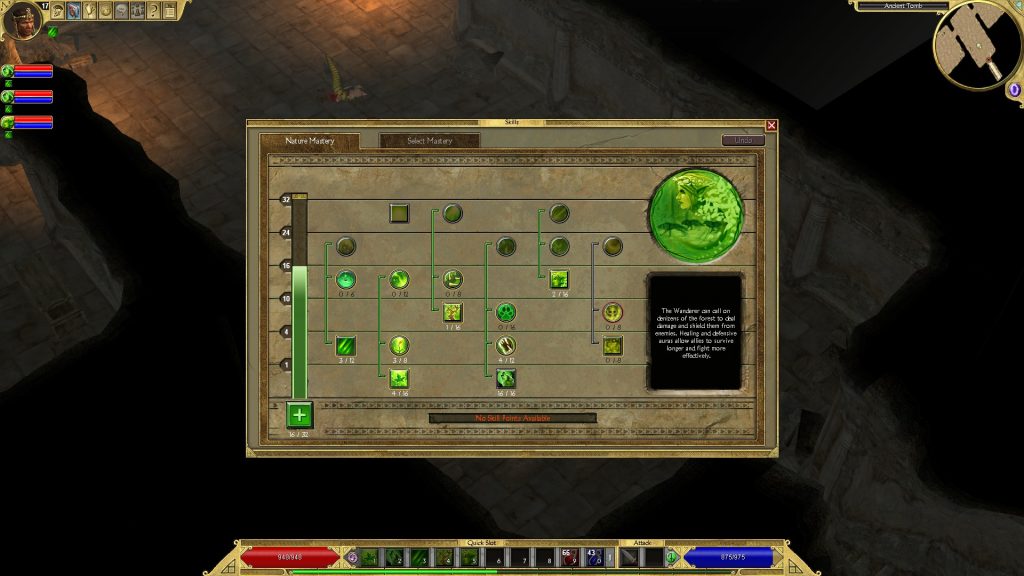 You can choose a primary mastery and secondary mastery, consisting of standard combat choices such as Warfare, Defence, Hunting and Rogue. There are also magical Masteries such as Nature, Storm, Earth and Spirit. Each mastery has skills you can unlock and add points to increase the proficiency of those skills. There are 36 master combinations available in the base game which include pure disciplines within one Mastery and hybrids between different Masteries. The aim was not to lock you into specific classes from the outset but give you some flexibility to build the character to your playstyle, and this was something that stepped Titan Quest above the rest at the time.

The inventory system used the grid-based system which suffered from space issues and I constantly had to do a ‘bank run’ where I would teleport back to town, sell the junk, look for upgrades to equip, bank anything that was too high level, and then teleport back to the action. I am not ashamed to admit that I’m a loot whore. I will loot absolutely everything, so I can sell it for gold and look for upgrades. Though after 20 levels I had racked up 1.5million gold and there was hardly anything worth buying except for bank space upgrades. 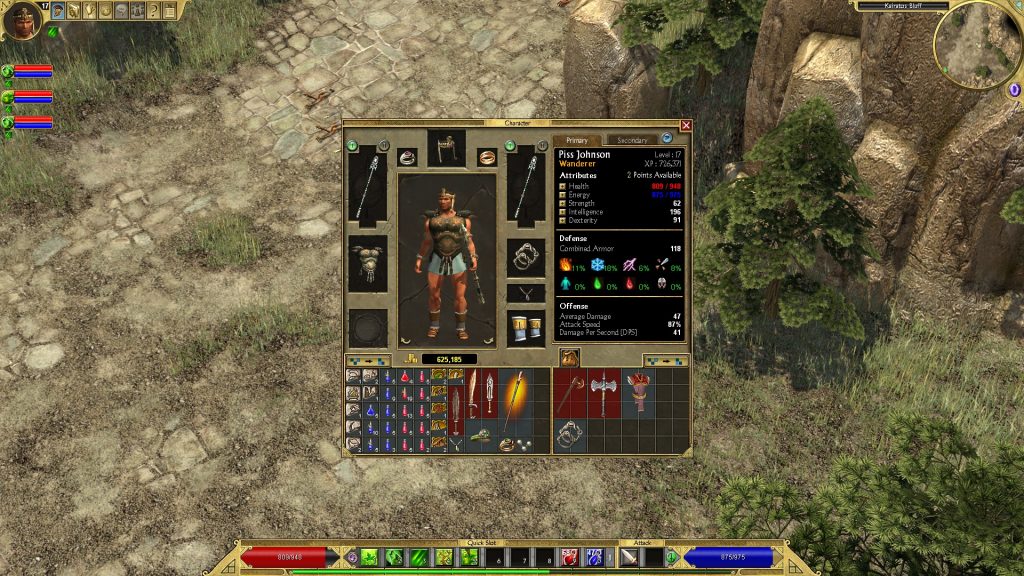 Item quality ranges from white to yellow, green, blue and then purple were Legendary items. There were also orange items which are charms and relic shards. Loot the prescribed amount and they can be combined to create completed charms/relics which can be added to buff your armour and weapons. The only negative to item loot was that often the loot items dropped would be way lower than your current player level, so it meant you would wear the same armour and weapons for large chunks of the game until maybe you find one or two new upgrades. Thankfully this didn’t affect the difficulty of the game, in normal mode anyway.

When the Immortal Throne expansion was released in 2007, it added Arcane Formulas to craft relics for your character. There were three levels of artefact relics – Lesser, Greater and Divine, which added a variety of status effects. Also added in the expansion was the Dream mastery which was a magic-focused skill tree that relied on illusion and stasis effects to disrupt enemy groups. 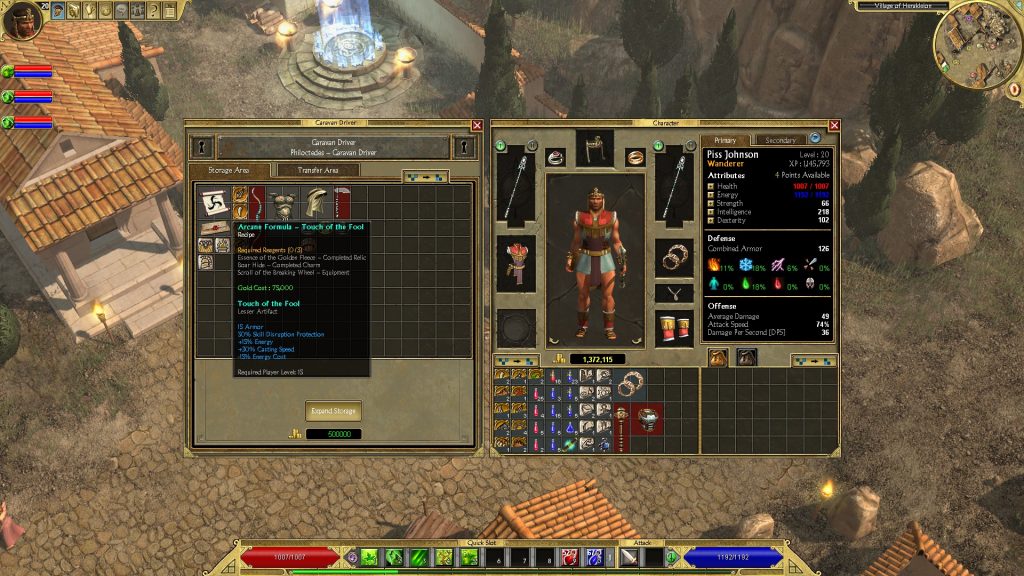 Almost a decade after the Immortal Throne expansion, THQ Nordic announced out of nowhere a new expansion titled Ragnarok which was released in November 2017. Ragnarok added a fifth story act to play through in the uncharted lands of northern Eurpe. New characters could be made by ticking the ‘Accomplished Hero’ button which started them at the commencement of the Ragnarok story at level 40. A new Runemaster mastery was added, which was a weapon-wielding mage type, bringing the total mastery combinations up to 45, and the level cap was increased to 85, making this the longest story act to date for the game. I’ve just started playing it so here goes another 20 hours of fun! 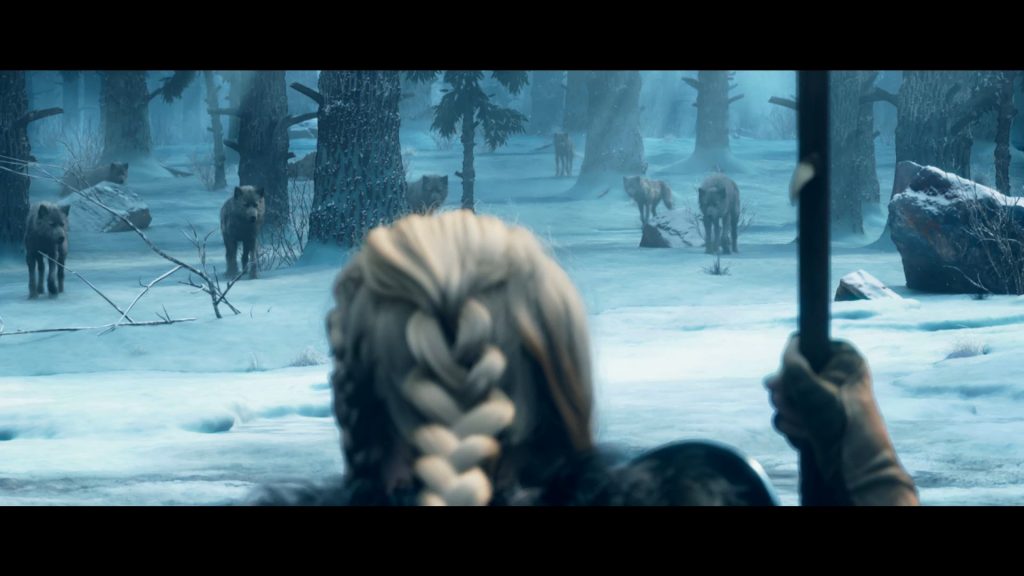 Overall, I gave Titan Quest a 7/10. If I was reviewing the game back in 2006/2007, it’d be a solid 8, however it hasn’t aged well on PC, though the Ragnarok expansion slightly improved the graphical effects. The game was one of the better action RPGs of the mid to late 2000’s and the game is still popular today thanks to the Ragnarok expansion in 2017, and the port to Xbox/Playstation earlier this year.

This review utilised the PC version of the base game and Immortal Throne expansion with 20 hours of gameplay. Titan Quest is rated M Mature with Violence and Online Interactivity and the Anniversary Edition can be bought through Steam for US$19.99 or on Xbox One and Playstation 4.

Recently announced, Titan Quest releases on the Nintendo Switch on July 31 in the US, though no firm date for Australia yet. This will be one of the first proper action RPGs to hit the handheld console and should be a lot of fun, especially multiplayer co-op.