As a newbie to the series, Trine 4: Nightmare Prince first attracted me with its mixture of puzzle solving and platformer gameplay. However after the first few areas it was apparent that there were a lot more puzzles than platforms. Don’t mince my words just yet. Even though this was the case, I was still enjoying this magical, colourful and sometimes frustrating wild goose chase.

Trine 4: Nightmare Prince once again follows the adventures of Ponteus the knight, Zoya the thief and Armedius the wizard. They’ve been tasked to find the missing Prince Selius who after experimenting with his growing magical powers has caused havoc across the land through his reoccurring nightmares coming to life. In the process of running away the nightmares and fears of all who come across him have started to spawn as well, leaving a trail of darkness on your journey. The trio must help those affected and get to Prince Selius before his powers become too great and leave the world in darkness.

Taking on the role of all 3 as a solo player or controlling one each with friends, your chase has you solving many well thought out puzzles through colourful environments with a magical soundtrack that sets the scene beautifully. Honestly, I wasn’t expecting scenes with such varied and vibrant design. Trine 4: Nightmare Prince is probably one of the most beautiful games I’ve seen this year. 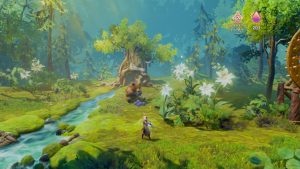 None of the puzzles ever felt stale and even had myself walking away from the game multiple times due to some of their difficulties. As pointed out earlier, Trine 4: Nightmare Prince is definitely more puzzle heavy rather than being equal parts puzzle and platformer. As soon as you enter a room, cross a canyon or finish solving a puzzle chances are you’re immediately met with a new one. For me this was right up my alley but if your main preference is a more traditional platformer where the path is already made for you than this might not be your cup of tea. Trine 4: Nightmare Prince successfully puts a challenging spin on the platform genre.

Some puzzles were as straight forward as creating platforms to walk across to the other side. While others required large amounts of experimentation. On multiple occasions I found myself creating solutions that I definitely considered as cheesing my way through. But don’t look at this as cheating though. There are multiple solutions to most of these puzzles and they don’t all have to be overly complex to progress. It’s all about taking what you’ve learnt previously and playing around with what works best within the environment.

What helps these puzzles consistently feel fresh is how they’re built around new skills you learn via the “skill tree”. Now I put this in quotation marks for a reason since this “skill tree” doesn’t exactly work in the usual manner. All the new skills you learn from it are merely scripted and progression based. From certain points of the game you learn and use these new skills to solve new puzzles ahead. Most of the skills do branch out and include an upgrade though which you can apply once learnt using upgrade points. This is the most customization the “skill tree” really has to offer. While learning new skills is progression based, gaining upgrade points is done via collecting coin-like tokens through level progression and exploration. Levels have many secret areas to find which I of course found thoroughly enjoyable searching out. Amongst the hidden upgrade tokens there are also hand-written letters containing lore, as well as collectables. The latter don’t seem overly rewarding though. As far as I could tell they just add some items to the main menu screen. 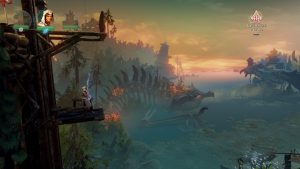 Each character has their own purpose through out the story, but some end up being more useful than others. While all their unique skills come in handy, I found Ponteus takes a back seat for most of the first half of the game. As the big burly knight, Ponteus can slam down on objects and deflect with his shield. But these skills aren’t overly needed compared to those of the Wizard and Thief. Armedius can levitate and summon platform-like objects. While Zoya can use ropes to pully herself/objects upwards, swing her way over canyons, create tightrope bridges, shoot objects from a distance or at close range, set things on fire, freeze items, frankly Zoya is the MVP in this game. Together though these two create solutions for most of the puzzles throughout which focus mostly on physics, elements and a hint of magic. The skills gained and situations given do give Ponteus a little more screen time later on down the track though. If you’re playing with friends, I’d definitely try and snag Zoya or Armedius.

Puzzles aside, Ponteus isn’t totally useless. He becomes the go-to guy when it comes to combat encounters. Which I wouldn’t exactly call great or memorable. They pop up in the most random places through out the game for no reason. They’re almost identical combat situations every time and after a while they don’t feel absolutely necessary either. The more memorable combat encounters though were the boss fights. There were only a small few but would loved to have seen more to replace the other encounters. 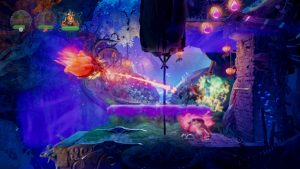 Apart from the monotonous combat instances, Trine 4: Nightmare Prince does a fantastic job creating a magical gameplay experience filled with many fun and challenging puzzles which will keep the gears turning in your brain.

Trine 4: Nightmare Prince is available now on Playstation 4, Xbox One, Nintendo Switch and Steam and I give it an 8 out of 10.