S.T.A.R.S. are joining the fight against the The Sideways Cube Monsters in Fortnite by introducing two iconic characters from Resident Evil. Jill Valentine and Chris Redfield outfits are available now in the Fortnite Item Shop, as well as alternate looks and Resident Evil-themed items. 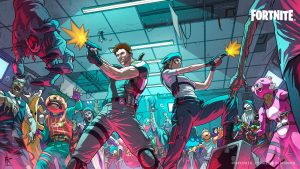 Iconic Resident Evil items such as herbs and the typewriter save point have also been recreated as Back Blings and are part of the S.T.A.R.S. Team Bundle which includes both sets of outfits and an exlusive Survival Loading Screen. A S.T.A.R.S. Team Gear Bundle is also available separately, including the anti-bioweapon knife, HOT DOGGER, and Stun Rod Pickaxes and the Brolly Stroll Emote.