AS with the majority of their content before launch, Borderlands 3 developers have given us a small taste of their upcoming Season Pass 2. The first portion of DLC which will be available to buy from November 10 is called the Designers Cut. As previously reported, only minor details about the Designers cut were mentioned when Season Pass 2 was announced. This includes the addition of new skill trees.

In the latest blog from the developers, they’ve revealed the skills tree’s for both Amara and FL4K. FL4K’s new set of skills were announced during Gearbox’s PAX Digital Showcase. The new “Trapper” Skill Tree features a different kind of pet: The ION Loader. Gearbox Software Game Designer Tommy Westerman says “To FL4K, something doesn’t need to be warm, fuzzy, and poop out their mouths to be a pet. To FL4K, anything can be a pet, including a Hyperion Loader Bot.”

The “Trapper” Skill Tree looks to be a great option for solo vault hunters as its passive abilities give both FL4K and his pet a huge survivability increase and added damage. FL4K’s new Action Skill is the Gravity Snare which throws enemies up in the air, stunning hem before slamming them back down. 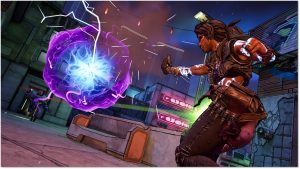 Amara’s new “Enlightened Force” Skill Tree essentially allows you to go bowling across the universe. Phaseflare is Amara’s new Action Skill summons a large orb which can also be smacked around the battlefield, dealing huge damage to enemies. Using the Cryo elemental effects made available in “Enlightened Force” makes for a perfect combo of frozen enemies to strike with your giant bowling ball. If you’re playing with a group, you can also change your Action Skill to use to Orb for healing instead.

Gearbox Software’s Creative Director Graeme Timmins goes into detail in the blog about how Amara’s Phaseflare Action Skill is different from her other three. “Up until now Amara had ‘fire and forget’ Action Skills, but with the new Phaseflare, she’s capable of even more damage when properly managing the skill,” says Graeme. “This also opens up a whole new set of Action Skill Active Anointments that previously hadn’t synergized too well with her other skills.”

Moze and Zane’s Skill Trees will also be revealed to us prior to the Borderlands 3 Season Pass 2 launch via a live broadcast on the Borderlands Twitch channel on October 23rd at 2AM AEST.