“Keeps true to it’s original formula while also updating most aspects of gameplay.”

Every time I’ve referenced Two Point Hospital during my playtime I’ve come very close to saying or writing the name of it’s inspiration instead. Two Point Hospital brings back so many memories of the classic hospital simulator, Theme Hospital, by keeping true to its original formula while also updating most aspects of gameplay. Two Point Hospital launched back in 2018 on PC but has only recently made it’s way over to consoles. This reviewing experience unlocked a personal nostalgic journey back in time circa 1999 when I was a young amateur hospital builder. 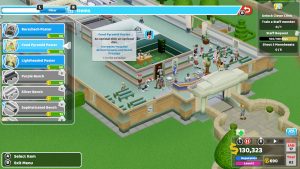 In Two Point Hospital you’re in charge of building hospitals in Two Point County and raising them up to a three-star prestige. During your time you’ll have to manage patient visits and make sure you have the right facilities and staff for each illness. All of this while also dealing with problems like under/over staffing, machine breakdowns and balancing finances. Completing tasks like curing a certain percentage of patients or making enough money will reward you with stars. The more stars you earn the more hospitals you can build. It takes away the board game-like progression in Theme Hospital and instead gives you a little more freedom to go your own way. If you want a break from the stresses of one hospital you can leave and work on another. Which is something I ended up having to do early. But more on that later.

Now as a long time fan of Theme Hospital I had a couple of key expectations right off the bat. Curing and diagnosing patients with the silliest of illnesses (ie. The ever so memorable Bloaty Head Disease) and that lady who speaks over the PA. For years her voice has been burnt into my brain with all her humourous announcements. Anyone whose played Theme Hospital would know these are the standout key components and as long as they were present, I knew I’d have an enjoyable experience. Thankfully It didn’t take long for me to tick both off my list. Sadly I haven’t come across any bloaty heads but there are patients who suffer from “Light Headed-ness” whose symptoms include light bulbs for heads. As well as a “PAN-demic” of patients with cooking ware stuck to them. And the added comic relief of the PA lady is back with such lines as “Announcement! Try not to die,” and “In the event of an earthquake please stay still.” She sounds almost spot on to that of Theme Hospital but after doing some research, I learned that Two Point Studios unfortunately couldn’t find the original PA lady. 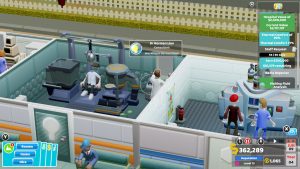 With both of these core traits present we already have ourselves a solid foundation for Two Point Hospital. While it still feels like the classic hospital simulator thus far there have also been improvements made to the rest of the gameplay, aesthetic and overall feel. Apart from the improvement of graphics, which share a similar aesthetic to Theme Hospital cutscenes, a very noticeable change is the addition of music. And I’m quite a fan of this. Once upon a time busy crowded hospitals were noisy and it was hard to drown out the repetitive sharp sounds of typewriters, doors and other equipment. The background music however softens such noise and gives gameplay some extra pizzazz. I don’t even notice sound effects anymore.

Now that I have some tunes I was in a greater mood to build my hospital. Not to say that I wasn’t before. The building experience is surprisingly fluid even while using a controller. Controls are simple and easy to get your thumbs around, which for a game that was originally made for PC is very satisfying. It feels almost as simple as using a mouse to build/decorate your hospital rooms and navigate your way around. Two Point Hospital also allows you to edit rooms from almost any angle, as the camera doesn’t have one static isometric view. The only downfall I had with the freedom of camera movement is the zoom in/out feature. It’s a new feature that’s needed but the camera doesn’t zoom out overly far. It reaches a certain point and then switches to a not so detailed top down layout view. This has been kind of helpful but personally I would have rather been able to zoom out further and still see every detailed nook and cranny of the hospital. Since I reviewed Two Point Hospital on Nintendo Switch I tested to see if you could use the touch screen controls to create rooms, etc. Sadly this wasn’t achievable.

Now if I can give any advice about hospital building and being successful it’s this, don’t build one of everything and listen to what your patients need the most. Hospital management can be easy but eventually comes with a slight learning curve. Granted the game will make things easy for you for the first couple of hospitals but at the same time will lead you to believe that every room at your disposal is needed. Which can lead to some wasted money on empty facilities and possibly unneeded staff while patients wait longer because there aren’t enough of the facilities they require.

A prime example being my 3rd hospital. It eventually became a small sardine can-like disaster. Upset patients filled the lobby and corridors even though I had everything they wanted. I even had a double up of important rooms. I gave them vending machines and they were still hungry/thirsty. If patients weren’t storming out, they were dropping like flies. All while I was trying to get my staff to a certain happiness percentage. By this point the hospital was beyond the point of being helped. As I mentioned earlier I had to abandon it and move on. I started on a new hospital and didn’t look back, or at least for now. I will need to rebuild it at some point which I’m glad you can do. If you mess up or you’re OCD and don’t like how your hospital looks you can either wipe entire rooms/move them around or restart your hospital. But since building my hospital from hell I’ve learned that not every hospital needs every facility. But sometimes you do need about 10 GP offices. 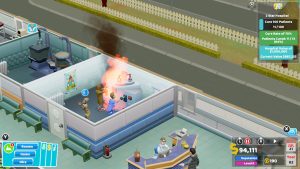 Finally reaching those 3-star hospital goals does take time depending on the objectives required. This sometimes means rare moments of sitting on your thumbs while you wait for the numbers to increase. But there are plenty of scenarios in between to keep you on your feet like patient/staff requests, machinery catching fire and ghost busting. But that’s only if you let your patients die. Which you shouldn’t but honestly it’s harder to control than you think. Once your hospital becomes larger and has multiple buildings, managing all the things can feel a bit overwhelming. But you don’t need a doctors degree to get good. You can track down staff, patients, hire more staff and keep an eye on numbers within a matter of seconds. The UI is extremely user friendly and once you get your thumbs around it, you’ll become a pro hospital manager in no time. Within a 3-4 give or take you’ll have a 3-star hospital. But remember this means it’s time to start over and begin a new hospital journey. And as an added bonus, the console release also comes with all available expansions giving you even more hospitals to build and manage with plenty more patients lives in your hands.

Two Point Hospital has been one of the best flashbacks to my early gaming days without it needing to have been made at the time. I couldn’t recommend this enough for newcomers to the genre but it’s old-school fans who’ll really appreciate the game for what it delivers.

Two Point Hospital is out now on Playstation 4, Xbox One, Nintendo Switch and Steam and I give it a 9 out of 10.