“War Tech Fighters is a fantastic sci-fi action game featuring huge mechs battling in space. I loved that it included melee fights with other mechs and not just a distance shoot-em-up.”

War Tech Fighters is a sci-fi mech action game developed by Drakkar Dev and published by Blowfish Studios. It was released on July 3, 2019 for Xbox One, PlayStation 4 and Nintendo Switch. Having enjoyed playing War Tech Fighters so much on the Xbox, I found and bought the Steam version for PC which came out last year by Greenman Gaming. This game features huge mechs in space and feels like Pacific Rim meets Battlestar Galactica. The graphics of the game are fantastic with various space scenes used and some low-gravity locations as well which added another element. It looks better on my PC than on the Xbox with a 110” screen but not enough to be a bother. The rock music was amazing and complimented the action in missions.

The game starts off at the Athena Station of the Ares Colonies and you play as Jacob, along with Aiko, when Zatronian forces arrive and attack. Using RT for standard fire and RB for heavy fire, you quickly waste these small fighters. When an enemy’s health drops to a certain point, you are prompted to press X which performs an execution. These executions are various types of glorious finishing moves that not only look bloody awesome, they also replenish some of your hit points and energy. Some of these executions consist of swift uppercuts to smaller craft, flying kicks, shield charges, and then the bigger ships cop a sword through the guts or are cleaved clean in half. The execution animations can be skipped, but even after playing for 18+ hours, they never got boring and become very useful for that hp/energy replenishment in huge battles. 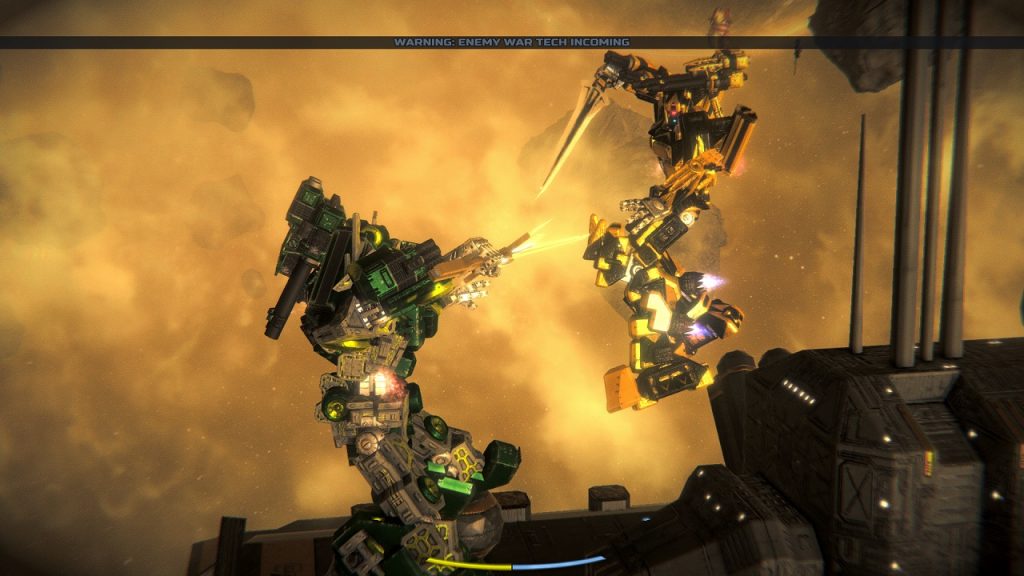 Regular fire is fine for the very small fighters, but the heavy ranged attacks can be used to take out turrets and multiple small fighters quickly so you can concentrate on bigger targets. You can also use missiles depending on the war tech components you select. During missions, you will likely have an enemy war tech fighter spawn into the battle, and it is with these that you engage in melee combat. With a mixture of light and heavy attacks, as well as dodging and retaliation attacks, you will slowly whittle the enemy’s health down and finish them off in an epic ninja slow-motion sword swipe showing the molten metal. 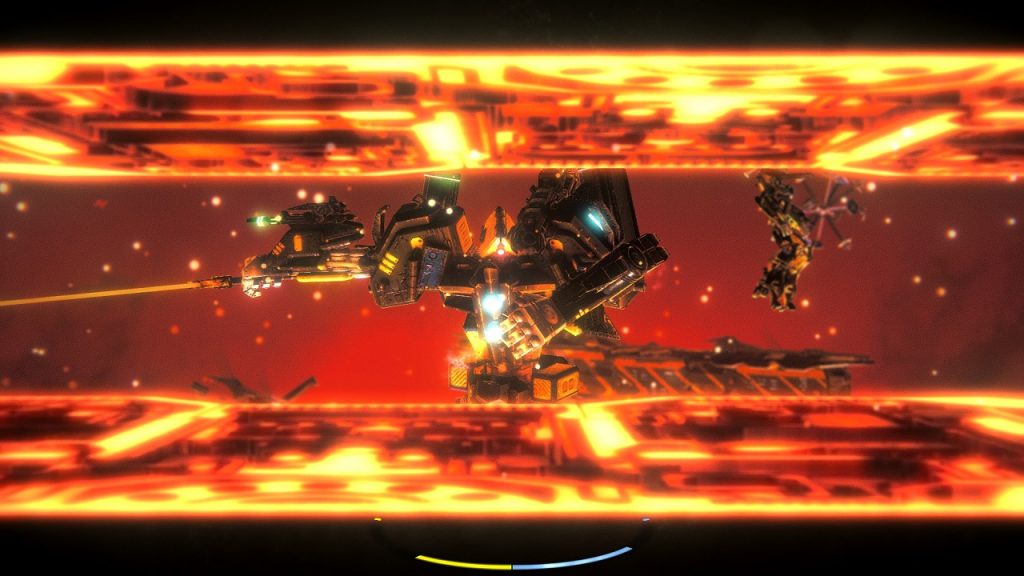 Whilst in these melee fights, you can dodge and then counterattack, and if you time your weapon swing with the enemy, you will lock swords together which brings up a targeting reticle. You need to aim for the centre of the reticle and then press a button, and if done correctly you will stun the enemy for a short time, allowing you to use some heavy attacks. Also, if you time your shield block with their attacks, you can block stun them. Early on, these attacks consume a fair amount of energy so it is best if you can hold off engaging these tech fighters until you have plenty of energy to use. After this first battle, Jacob mentions there’s a new pilot that everyone is talking about, Nathan Romanis, and for the rest of the game you will play as Nathan.

You are given a choice of three types of war techs for Nathan: Hawk, Lynx or Rhino. The Hawk has high attack and speed ratings, at the cost of endurance and aim. The Rhino has high damage and heavy armour but at the cost of speed, and the Lynx is a good allrounder with high aim. I chose the Lynx on my Xbox playthrough and the Rhino on my PC playthrough. I didn’t notice too much of a difference as I progressed the missions, however a lot of your power and survivability is based on what components you upgrade for your tech fighter which are highly customisable.

I highly recommend completing the tutorial missions as it teaches you all aspects of controlling your mech in battle and how to use vertical movement (Y and A buttons) when going in close to activate hard points – devices to hack/activate in missions. I seemed to have skipped the first tutorial which taught me these vertical movements, so I was beginning to get frustrated trying to maneuver the mech into position. I was fortunate to have a member of Drakkar Dev watching my livestream on YouTube and over several of my playthroughs, they were kind enough (and very patient!) to give me lots of hints and tips if I was struggling in missions. 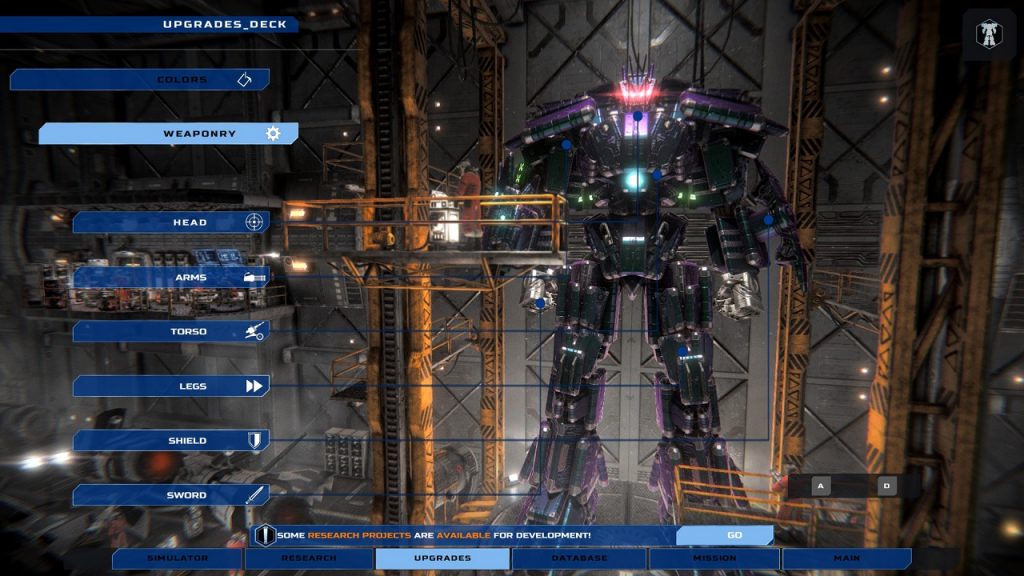 Credits are earned through completing missions, harvesting meteorites and by completing challenges, survival mode and replaying missions. You can then spend these credits on upgrading and researching upgrades and powerups for your war tech fighter. The Nebula frigate is your home base where you launch missions, customise your tech and research upgrades, as well as hit the war room for challenges and replaying missions. You can customise the head, arms, torso, legs, sword and shield, with some awesome and badass looking machinery. Many of the later upgrades are unavailable initially as you need to unlock them through research, and this is done by collecting pieces of special projects whilst in missions. 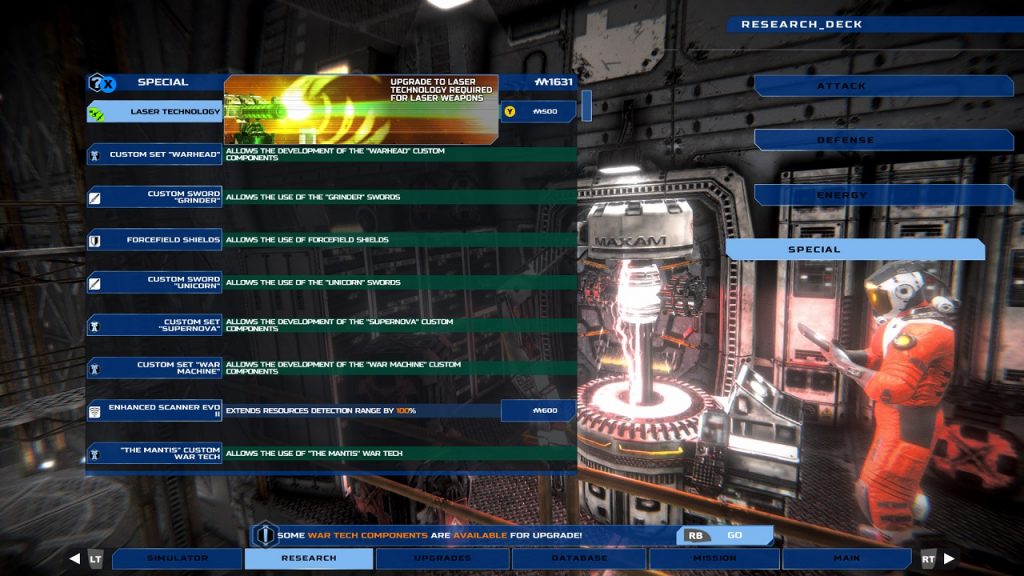 The storyline isn’t the strongest, however it’s immersive enough to want you to keep pushing through to the next mission. There is voice acting in major cutscenes but is absent in missions which took away a little of the atmosphere. This detracted from the experience in missions, but when it returns at key plot points, it sucks you right back into the story. The structure of learning different mechanics from mission to mission is well spaced out too. When I sometimes felt the missions were getting a bit repetitive, a new ability or gameplay mechanic would be introduced. There’s also a knowledge base section in the main concourse where you can re-watch key story cutscenes, read about the main characters you meet along the way and information about the various ship types you encounter.

By far the most useful ability in the game, and can turn the tide of battle, is the quantum wave. You must have full energy to activate it, but it can be devastating to turrets and small craft in proximity. There are research lines specifically to upgrade the range and effectiveness of the quantum wave and I’d recommend pumping some credits into these as soon as you can because this ability becomes critical in later missions. There are several bosses you come up against throughout the game and they are a good challenge. It took me several attempts to learn each boss’ abilities and how best to take them down, which often required changing out different mech armour depending on the damage type required. Once the main story is completed, a new game plus mode becomes available for you to continue to level up and continually upgrade your mech. I managed to complete the Mantis and War Machine mechs but the Fury set still eludes me! Exclusive to the console versions of the game is the Archangel set which looks awesome in battle. 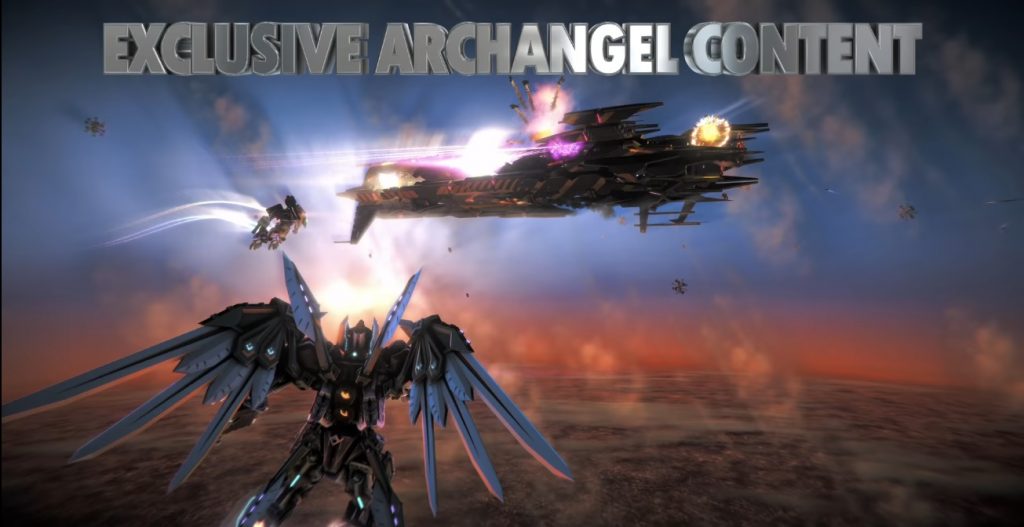 Overall, I gave the game an 8.5/10. War Tech Fighters is a fantastic sci-fi action game featuring huge mechs battling in space. I loved that it included melee fights with other mechs and not just a distance shoot-em-up. The storyline isn’t the strongest and voice acting was only present in cutscenes, however the ability to research and upgrade your mech components kept driving you to play more and more missions and unlock some very cool looking mechs. Sci-fi space sims and action shooters are making a resurgence in 2019, so keep an eye out for my review of another release by Blowfish Studios, Subdivision Infinity DX which released today, August 8, 2019!

This review utilised an Xbox review code provided by the publisher and also played on the Steam version with 18 hours of gameplay. War Tech Fighters is rated M for violence and is available on Steam, Xbox One, PlayStation 4 and Nintendo Switch.