“Weedcraft Inc is a fun tycoon management game dealing with the pros and cons of growing and selling weed in America using two well-written story scenarios.”

Weedcraft Inc is a tycoon management game developed by Vile Monarch and published by Devolver Digital and was released on Steam on April 11, 2019. I was first attracted to this game by the narrative trailer which explained the first of two scenarios available to play. You play as Johnny, an MBA student who has had to fly home to Flint, Michigan for your father’s funeral. Your brother Clyde has been growing weed in the basement to help pay for your father’s medical bills, as well as using the weed in a medicinal sense to ease your father’s suffering in those last moments. With bills piling up, you and Clyde decide to get into the weed market by enhancing what your brother started. 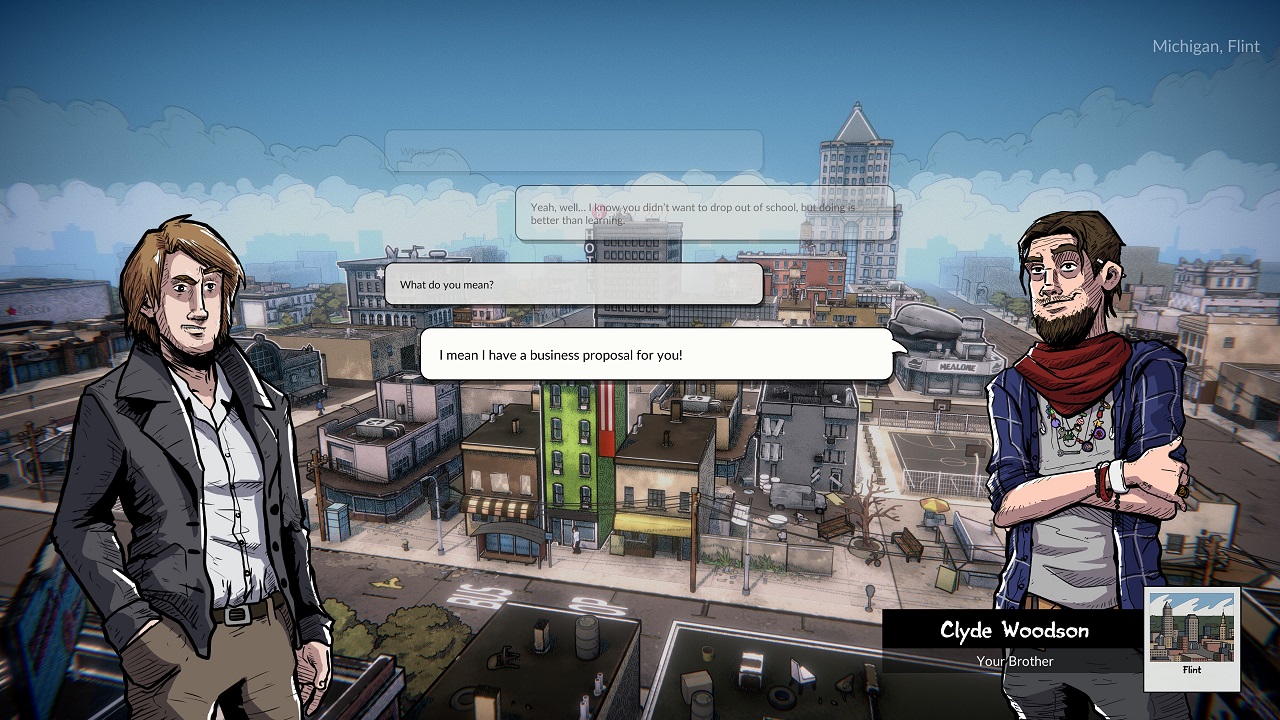 This is a game about growing and selling weed in America, both illegally and legally, but it goes further than just glorifying the whole drug industry. Stripping back to basic elements, this tycoon game is about cultivating a resource, using economics to sell the product, work the market to compete with other dealers, hire employees, manage profits and expanding your empire. The cool thing about this game is you can make decisions that are classed as ‘shady’ and other decisions classed as ‘decent’. Going down the ‘shady’ path is as you would expect – selling to anyone who has the cash and dodging or paying off the cops. The ‘decent’ playstyle allows you to go down the medicinal drugs path, selling to patients in similar situations as your father aiming to set up a medical clinic to sell the product legally.

When I loaded up the game for the first time, the music straight away had my head bopping with it’s great beat and chilled vibe. I tried to Shazam the songs so I could share the love but none of them were discovered. The credits tell me they are the likes of BRK, Cezary ES.CE Sysio, DJ Eprom, amongst others. I enabled tutorial tips as I’m not the best tycoon/strategy game player and started the first scenario. The quests started off easy in the basement of the family home. Three pot plants were ready to be used so I planted seeds of a strain called Reggie and added water. Watering improves the quality and training the plants with clippers by holding down the mouse button promotes growth. Some in-game message pop-ups interrupted these actions causing me to produce poor yields, but this is not a huge deal. 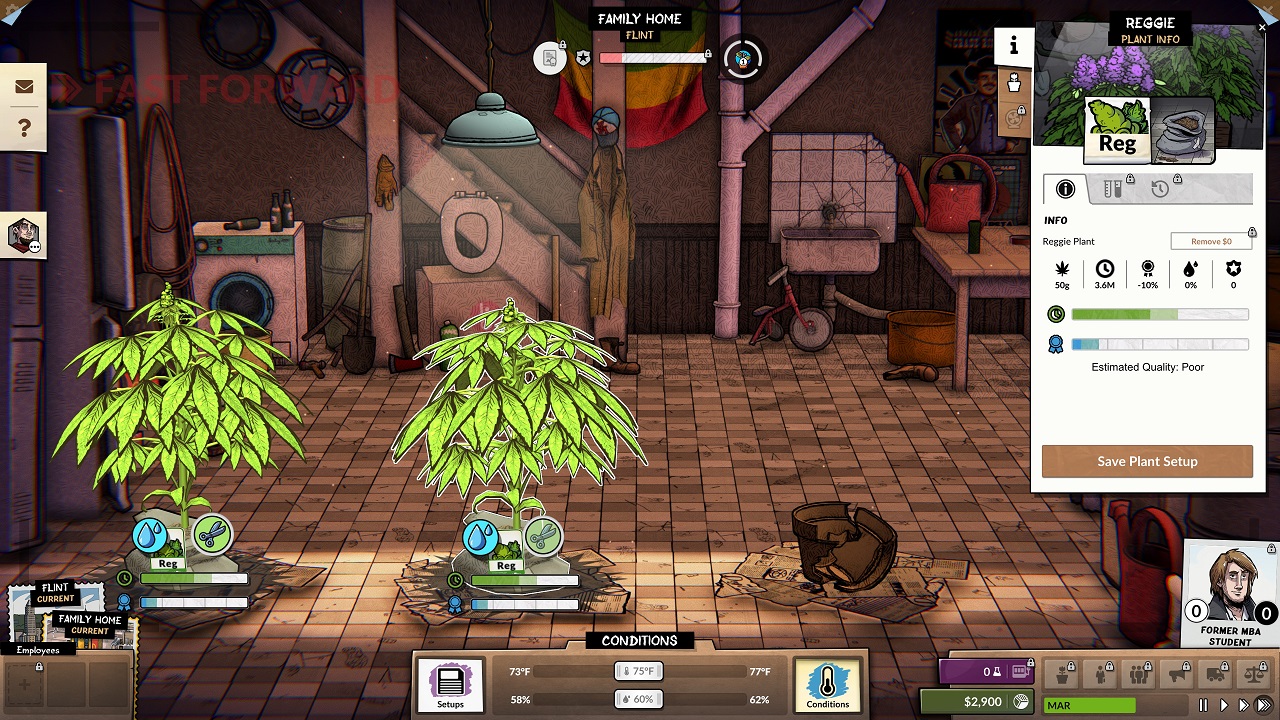 Once the crop had been tended to full growth, we can sell the product at the nearby marketplace. At each selling location that you purchase, different selling groups will present themselves and they will want specific strains and qualities. One group might want to buy Reggie for $8 and the next group wants to buy it for $15. If you set the price at $8 then you will be able to sell it to both groups, but you need to decide if you want to sell the product that low all the time, or make more money per yield at the higher rate, at the cost of one of the selling groups. If you do keep the price low, you need to make sure you can keep up with the demand, so it’s a constant balancing act as you purchase new selling locations. 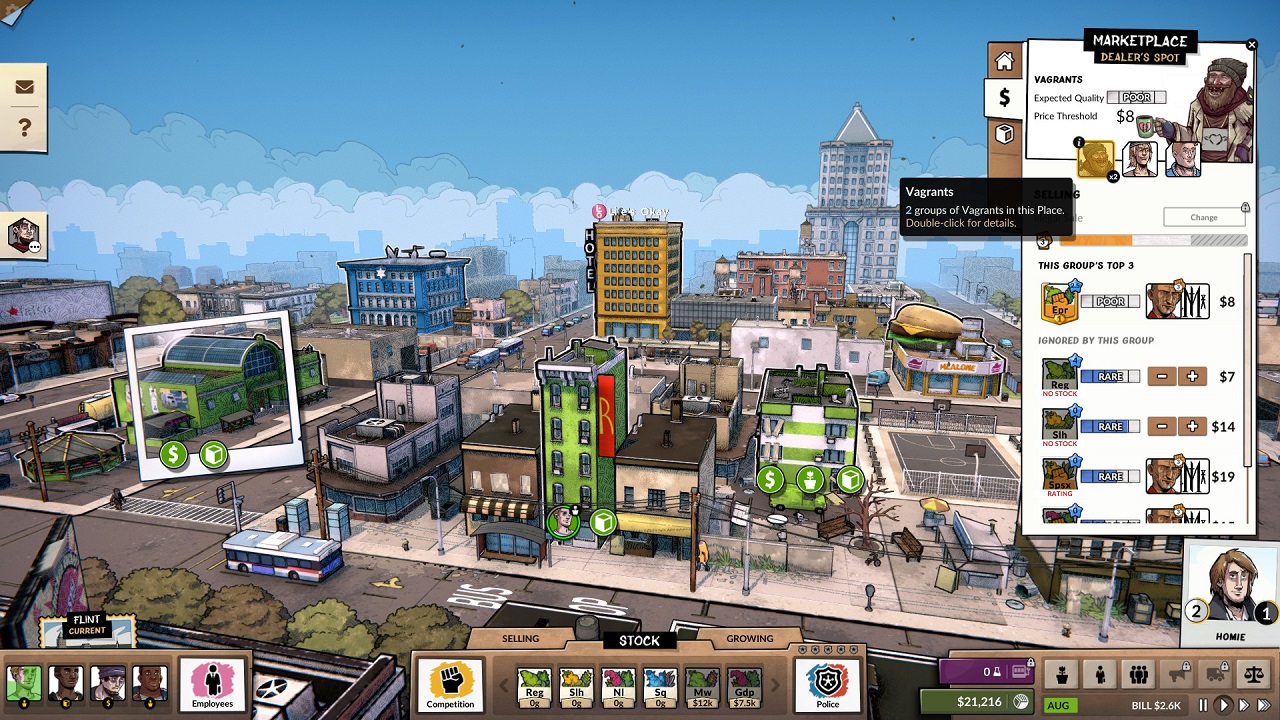 I paid to expand the basement to add more plants, better soil, better lights, fans and air purifiers, all in an attempt to keep the room’s climate optimised for growing crops, but also being mindful of sound and smell so as not to alert the local police. The more lights you add, the more heat is generated. The more fans you add to bring the temperature down adds more noise to your house. The more crops you are growing in the room, the stronger the smell so you need fans and purifiers. It sounds complex but this part of the game isn’t too bad early on. You slowly unlock better quality lights and fans, but each of them has pluses and minuses and the big thing to keep an eye on is the police vigilance. The more you grow and sell, the more traffic you attract to your sell locations and the more suspicious your operation becomes. 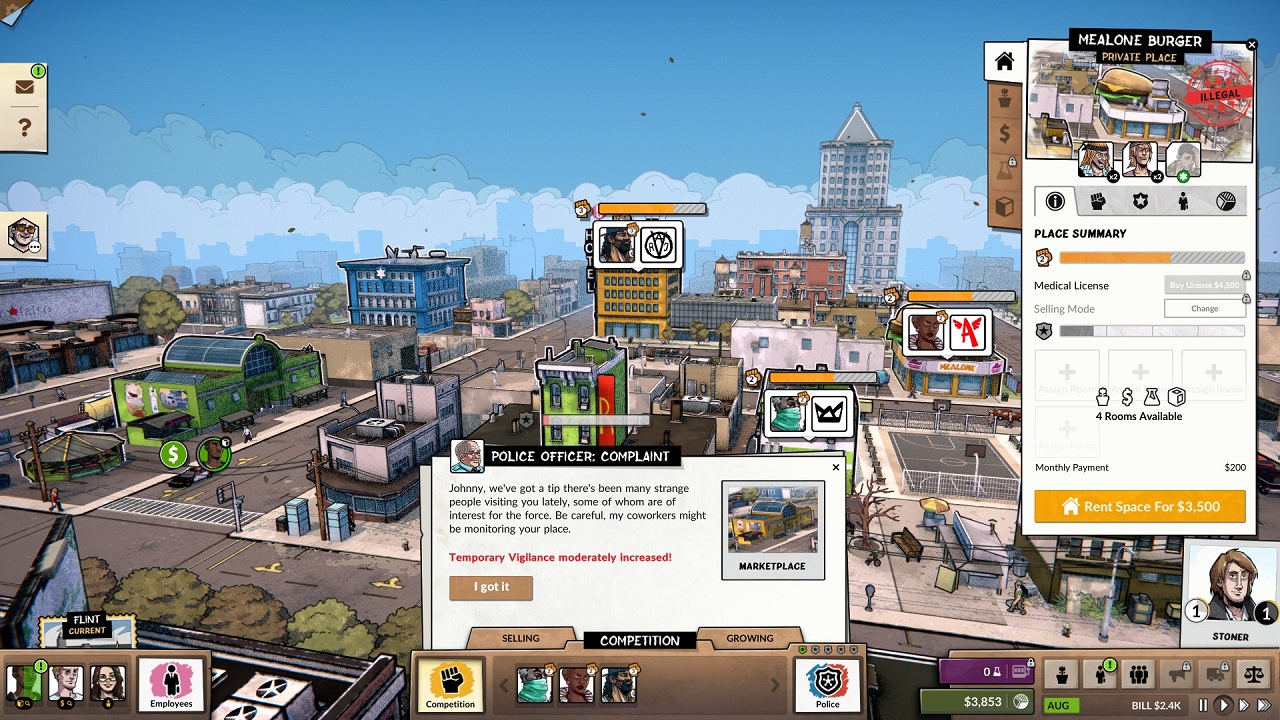 In order to earn more money from your product, you must tweak the nutrients involved in growing each individual crop. The tutorial tells you how much Nitrogen and Phosphorus is required to produce the perfect strain of ‘Super Lemon Haze’, however you need to tweak the Potassium to see what the best value is. Temperature and humidity of the room affects these values also, so whilst you may have worked out the best percentages to use in your basement, if you don’t use the same soil, lights, fans and purifiers in another selling location then you’ll need to work out different values. Much later in the game you will unlock researching which vastly helps with working out the best combinations and even giving you the ability to mix ingredients to create your own strains of weed. I wish I had access to this much earlier in the first scenario, but I did need to learn a lot about the game prior to discovering this system. 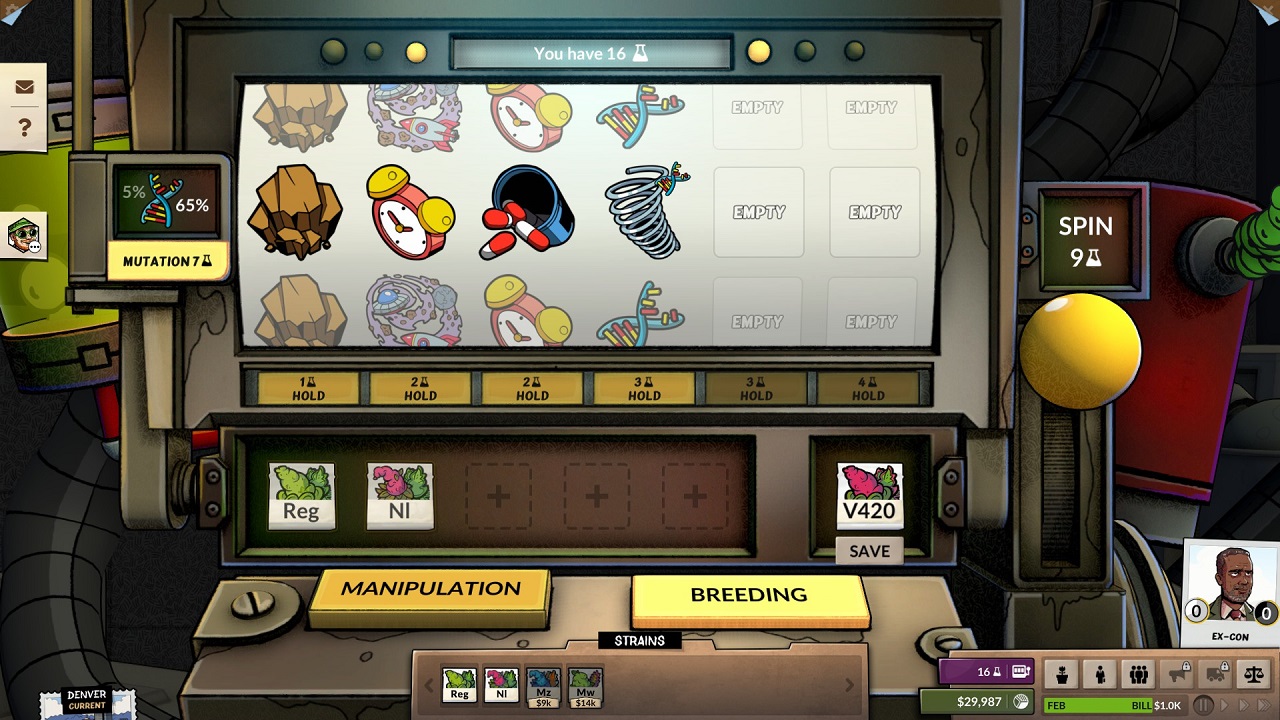 In the early stages of the game I was starting to get a bit overwhelmed trying to keep up with growing, tweaking and selling. Thankfully the game introduced employees to automate certain tasks. Each employee can be proficient in three skills – selling, growing and interpersonal, and you can assign them to two tasks at once. I chose an employee that had 2 skills, selling and growing so got them growing my crops for me and selling it at the market. Whilst this took the pressure off me having to manage everything, they were awful at tending the crops which was affecting the yield and therefore how much I could sell. I found I stepped in a lot to tend to the crops to keep up with the demand, until some of the employees gained enough experience to level up. 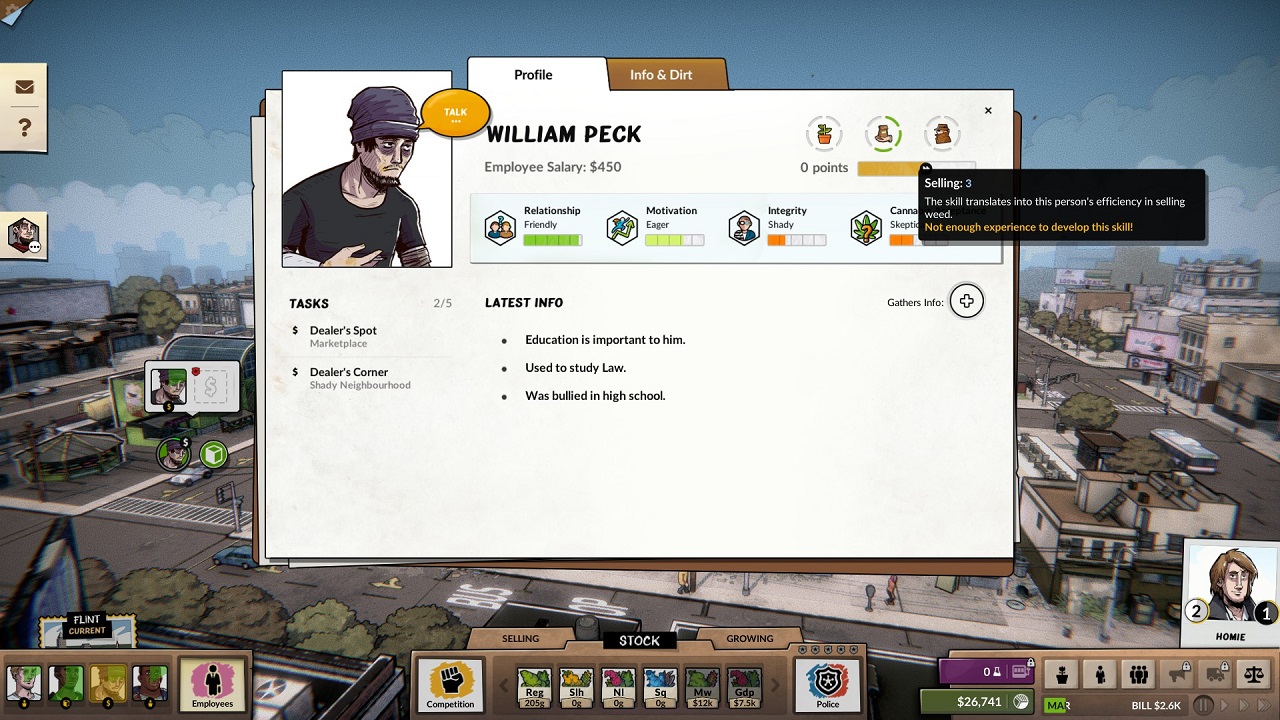 Some competition started to muscle in on my turf at the marketplace. You can see how much they are selling each product for. By reducing the price just lower than theirs and selling more product, you eventually got rid of them. A short time late, Police Officer Steve Polanski comes along suspicious of our activity as he is seeing a lot of people coming and going at all hours of the day. To help reduce police vigilance, we need to build a shopfront for each location. I could only afford to buy a teahouse, but other options were hot dog booths, taxi service, laundromat and more. This is yet another thing for you to manage, but that’s not all. 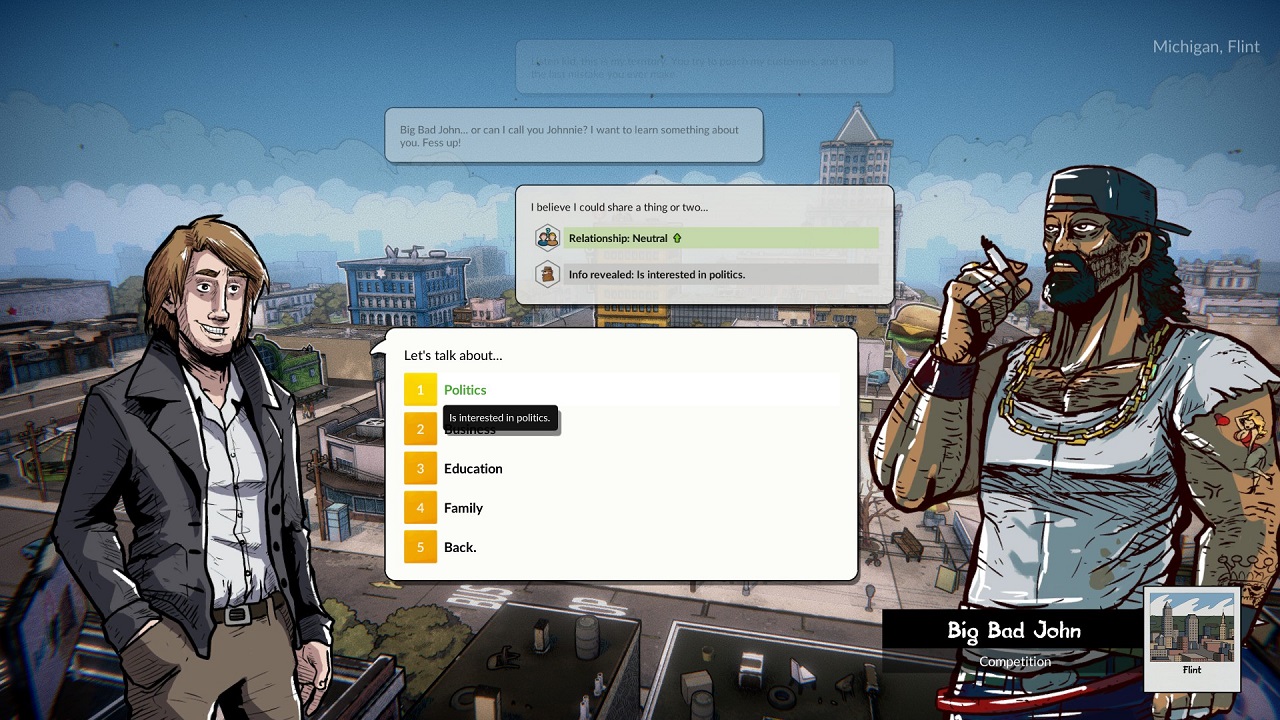 Shortly later, a rival gang muscled in on my turf and started selling their own secret strains of weed. The objective was to get your hands on this strain by multiple ways – steal it, befriend the boss and ask for it, turn their sellers against the boss or find out dirt on the boss to leverage. These tasks involve you conversing with dealers and the boss and as you start to talk to them, they reveal things about themselves. If you follow these topics you will gain favour, though if you press the wrong topic too hard, they’ll get bored or annoyed and you lose favour. I spent a good hour or more on this quest trying to befriend various dealers to give me the strain. I was finally able to befriend the boss enough and he handed it over. This gave me enough influence to unlock perks which are grouped under networking, growing, selling and researching. 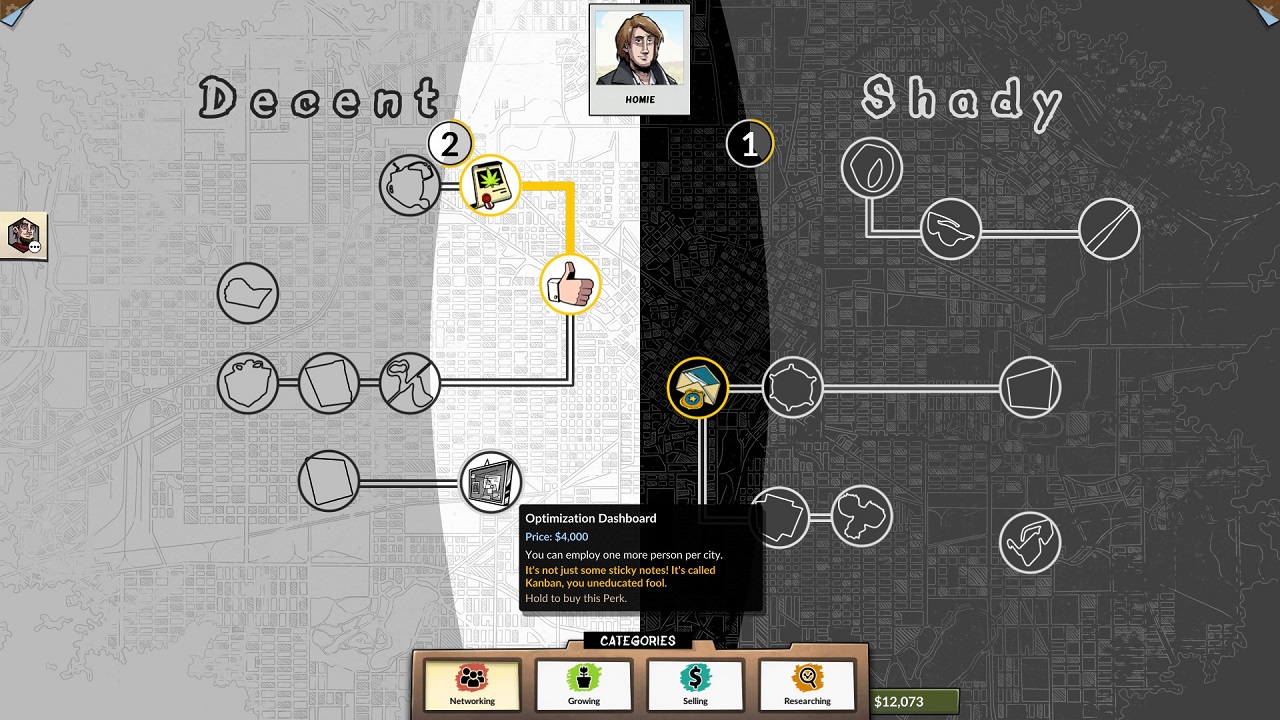 In this first scenario, I played enough to get me to the second location of Cleveland where we started to see more locations that sold weed legally. I did struggle at several points with all the micro-managing that was required and ended up deep in the red trying to run too many operations. This isn’t a fault of the game, rather I hit these choke points in a lot of tycoon management games where I start to lose control of the game. I usually will spend hours trying to correct the mistakes I made and often burn out. In Weedcraft Inc though, I restarted the first scenario a couple of times managing to progress further and learning more each time. The first scenario also holds your hand enough and unlocks systems right when you need them so that you are well armed to start the second, more difficult scenario.

The second scenario deals more with the legal trade scene. Jerome is an ex-con, having spent the last decade in jail for illegal growing and smuggling. He is released and heads back to Colorado, Denver where he meets his old friend Matty. Together they decide to team up and start an enterprise. The first task was to set up 6 legal or illegal operations in the city and I went down the legal path this time. I am still working through this scenario but it’s much more advanced than the first and introduces more political aspect such as lobbying to change laws around the drug trade. I haven’t yet progressed this far but am looking forward to seeing how that plays out. 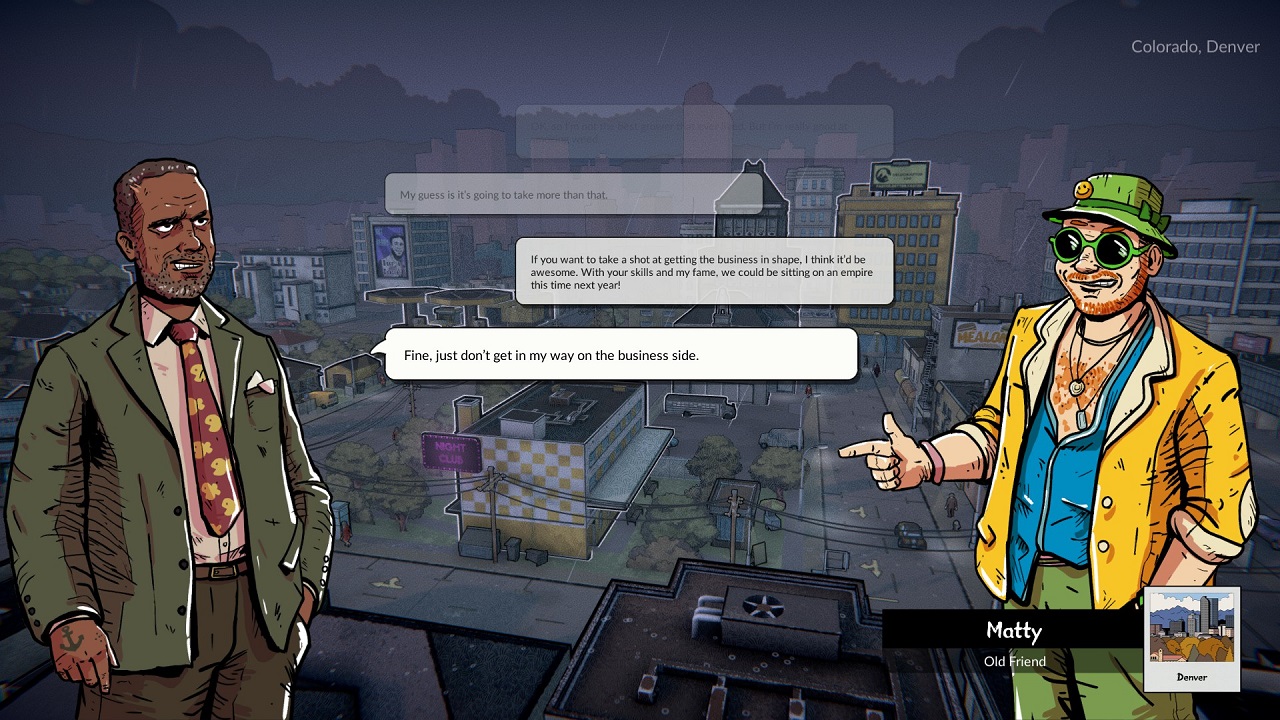 The game’s art style and graphics are very polished, and the interface is easy to use and understand. It can be a little fiddly swapping in and out various strains of drugs at each of the selling locations, but this is a minor detail. I did see a few icons and systems that were ‘unlocked later in the game’ and some I still haven’t unlocked yet. The music in the game is perfectly suited and is what kept me playing for hours. I just wish the full track and artist names were listed in the game’s credits so I could find more songs and support these artists.

Overall, I gave the game an 8/10. Weedcraft Inc is a fun tycoon management game dealing with the pros and cons of growing and selling weed in America using two well-written story scenarios. You’ll find yourself managing the growth, research and selling of various strains of drugs, dealing with rival gangs trying to muscle in on your turf and the politics around legalising drugs. The legality of the process is balanced well throughout the stories of the game and you can play them however you like – lawfully, illegally or a grey area in between.

This review utilised a review key provided by the developer with 10 hours of gameplay. Weedcraft Inc can be purchased through Steam for AUD$28.95.