“Wolfenstein: The New Order’s story really is fantastic, and I was well and truly hooked. The pace was breakneck speed and you wanted to keep on slaying Nazis, but after killing a few major characters it felt like it ended abruptly.”

Wolfenstein: The New Order is an action-adventure FPS developed by Machine Games and published by Bethesda Softworks in 2014 for PC, Xbox 360 & One and Playstation 3 & 4. It is the ninth iteration in the entirety of the Wolfenstein series. The first two games, Castle Wolfenstein (1981) and Beyond Castle Wolfenstein (1984), were developed by Muse Software for the Apple II and Commodore 64, and then ported to MS-DOS shortly after each release. These games played from a 2D top-down perspective and were more based on stealth.

Muse Software subsequently closed which opened the door for id Software and publisher Apogee Software with the release of Wolfenstein 3D in 1992 and its expansion Spear of Destiny in first-person view. Enter our hero, William “BJ” Blazkowicz. Fun fact – On January 30, 2018, John Romero and Tom Hall (co-founders of id Software), confirmed on Twitter that Doomguy is the son of Commander Keen protagonist Billy Blaze and the great-grandson of Wolfenstein protagonist William “BJ” Blazkowicz.

There was great hype leading into the game with its interesting take on our history. Ever wondered what the world would be like if the Axis powers had won World War II? Wolfenstein: The New Order gives you this alternate reality to play through with BJ Blazkowicz, his buzzcut, slapstick attitude and of course, big futuristic guns! Play as BJ as he battles across Europe, looking for the resistance who are on a mission to bring down the Nazi war machine.

As is customary with the series since the very beginning with Wolfenstein 3D in 1992, the difficulty selection screen presents you with various options, and in a very tongue-in-cheek way, makes you want to play medium to high straight off the bat. My first playthrough was on the “Bring ‘em on” difficulty which is the equivalent of ‘normal’, and I died 46 times across the whole game according to the in-game statistics – Not bad, it felt like a hell of a lot more!

After you complete the first hectic chapter set in 1946 WWII, you and two of your comrades, Fergus Reid and Probst Wyatt, are captured by General Wilhelm “Deathshead” Strasse. You are forced to make a no-win decision over who will live and who Deathshead will gruesomely kill for his experiments. If you wait and refuse to choose? Well, I’m not going to spoil it, but one word – brutal.

The choice between your two comrades doesn’t alter the game story too much, other than who you play with in certain missions and which gameplay mechanic you might prefer. Fergus will get you +10 max health permanently. With him you will be able to hot wire areas you weren’t able to access before. Wyatt will get you more armour bonus per piece of armour you pick up. You get to lock pick doors and lockers for upgrades and other collectible loot.

Through your escape you are hit in the head by shrapnel and end up in a coma for 16 years. You wake up in 1960 to the Axis powers having won the war and taken over the world ruling with an iron fist. You are being cared for by a woman named Anya and her family in a medical clinic, though they are being cruelly overseen by Nazi soldiers. Without giving away spoilers, you end up being lucid enough to kill a guard and then must find Anya and the Resistance.

Thankfully there is plenty of humour and funny characters throughout the story to balance this dark theme and you cheer a big ‘hoorah!’ when you take down these evil bastards one by one. There is a variety of new futuristic weapons to use, ammo/armour/health bonuses, collectible items and you can unlock bonus perks for BJ by performing actions in-game.

Overall, I gave Wolfenstein: The New Order a 7/10. The story really is fantastic, and I was well and truly hooked. The pace was breakneck speed and you wanted to keep on slaying Nazis, but after killing a few major characters it felt like ended abruptly. This is my only disappointment in that the overall length of the game felt a bit too short. I did put 17 hours of gameplay into my first playthrough and I loved it, it just left me wanting more. 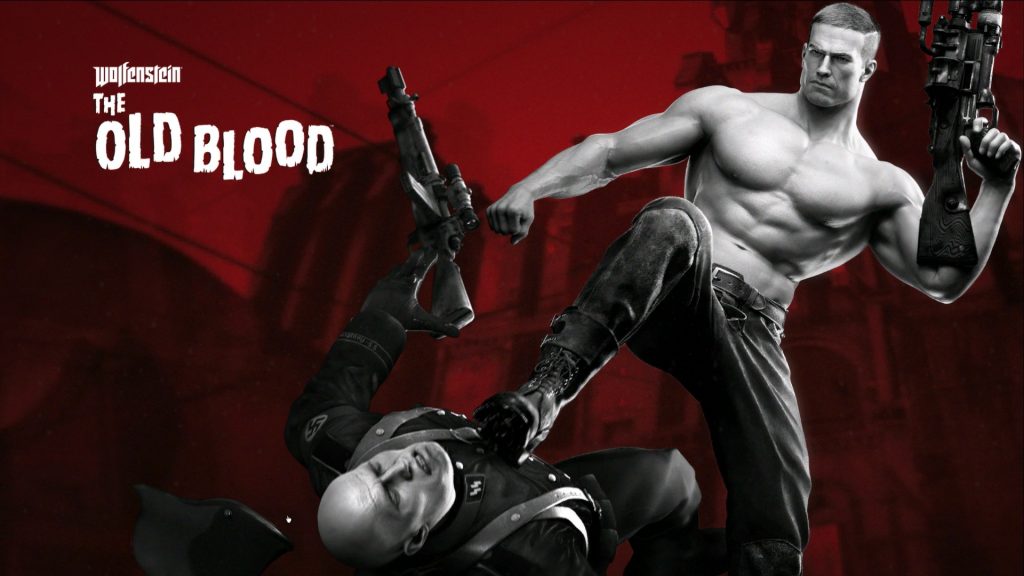 “If you were a fan of Wolfenstein: The New Order, you will love this stand-alone prequel as it provides more of an awesome back-story leading into the events of the prior game.”

Wolfenstein: The Old Blood was released in 2015 for PC, Xbox One and Playstation 4, and is a standalone prequel to New Order. Set in 1946 before the prelude of the prior game, you play as BJ who is on a mission to infiltrate Castle Wolfenstein and obtain a top-secret folder containing the location of General Wilhelm “Deathshead” Strasse.

It’s the same great graphics and gameplay as the first game, only this time with less of the futuristic weapons/themes as the first one, and adds more characters to enhance the story which is as brutal and horrific as the first. There are some great easter eggs through the game with pictures on walls of old Wolfenstein 3D levels. In addition, when you find a place to sleep in each chapter, you go into a dream state which puts you into a fully playable level of Wolfenstein 3D which is great nostalgic fun.

To get to a lot of the collectibles, you need to use the steel pipe which is a new weapon added to this game. It comes in two pieces so when in combat you can dual wield, or connect them together for a longer, more hard-hitting pipe. The two separate pipes are also used to climb rock walls, and the long pipe is used to open weak environmental surfaces. This meant I put more of a focus on finding the collectible items in each level and this slowed the pace of the story down a bit which was more enjoyable versus the intensity of New Order.

The other addition to Old Blood is the Challenge Arenas. As you complete each story chapter it unlocks a challenge arena for that level. These arenas are like horde mode where you face wave after wave of enemies trying to earn bronze, silver or gold status for that arena.

Overall, I gave Wolfenstein: The Old Blood a 9/10. The main story was short, only taking me 10 hours to complete, and I did spend a lot of time getting collectibles given the addition of the versatile steel pipe. If you were a fan of Wolfenstein: The New Order, you will love this stand-alone prequel as it provides more of an awesome back-story leading into the events of the prior game.

These reviews utilised the PC versions of both games split over 27 hours of gameplay. Both games are rated R18+ High Impact Themes and Violence, Blood and Gore. Both games are sold in a package in steam for US$29.95, however are available until 5 July for US$14.97 in the Steam Summer Sale. Well worth the purchase!