LAST week, the man of steel, Superman, was added into Fortnite via a special questline. He’s joined by multiple DC characters such as Batman, Harley Quinn, The Flash and soon by DC goddess, Wonder Woman. Wonder Woman will be added to the roster of super heroes in Fortnite on August 20 from 10AM AEST.

Her outfit, as well as an Armoured variant, Golden Eagle Wings Glider, Athena’s Battleaxe, Diana’s Mantle Back Bling and DC Trinity Loading Screen are included in the set available from the Item Shop. As always, there’s a chance for players to score themselves the Wonder Woman outfit not only for free, but also early. The Wonder Woman Cup starts on August 18 where duo teams try to win as many points as possible within the time/game limit. The outfit as well as Diana’s Mantle Back Bling are the grand prize for winning teams with runners up receiving a special Aussie made loading screen.

Australian Artist Nicola Scott is the talent behind the Honorary Amazons Loading Screen. Previewed below, the loading screen will be given to all players who score at least 8 points during the Wonder Woman Cup. 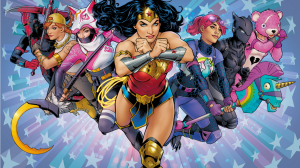 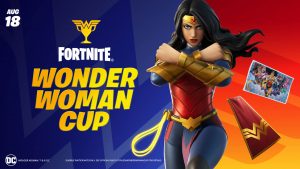