Preparations for the next season of the ANZBL is well underway! Last night live on their Twitch channel, World Of Tanks hosted the ANZBL Season 4 Draft.

The league said goodbye to the Wollongong Wolverines and the recently promoted Cairns Comets. To fill out the ANZBL the Lismore Leopards were welcomed back and a new WA based team, the Fremantle Fireflies joined the fray. 42 players nominated for the ANZBL Season 4 Draft, a new record for the league.

The Leopards and the Fireflies core roster of state players came from a recent tournament held by World Of Tanks. Teams of three competed to find out which of them would form the basis for two new teams. The other four roster position would then be filled in the Season 4 Draft.

The Draft is split into two parts: state picks and open picks. Each team needs to have at least three members from the state/country they are from (or areas in the case of smaller states). State picks fill out those spots. Teams can pick players from anywhere in ANZ in open picks.

Check out all of the players drafted!

The first round of open picks saw all teams selecting players.

The Badgers and the Hellcats roster was now complete. Three teams still needed to fill out their roster.

The last round of open picks had the two new teams finalising their lineup. 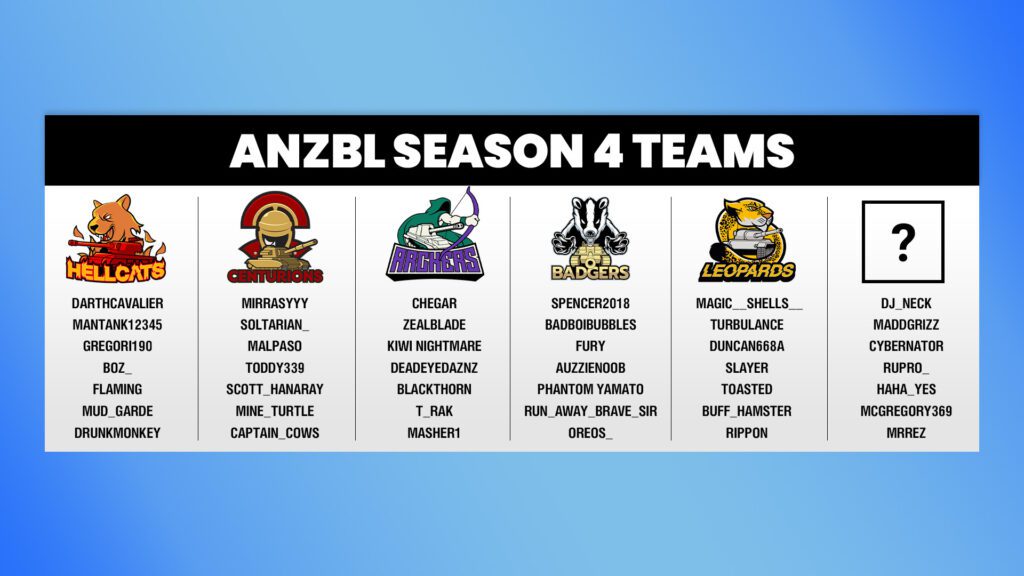 With the ANZBL Season 4 Draft done and dusted attention now turns to the matches. The single round robin tournament starts Monday 26th the September and runs into November with players vying for the $1000 first place prize. Physical player prizes also available. ANZBL Fantasy League will return with weekly prizes for the top-ranking participant.