World Of Tanks ANZBL Season 4 Round 3: The Ladder Takes Shape

World Of Tanks ANZBL Season 4 Round 3 sends the league past the halfway point of the season. How are the teams faring? Who are the front runners for the championship? Read on to find out! 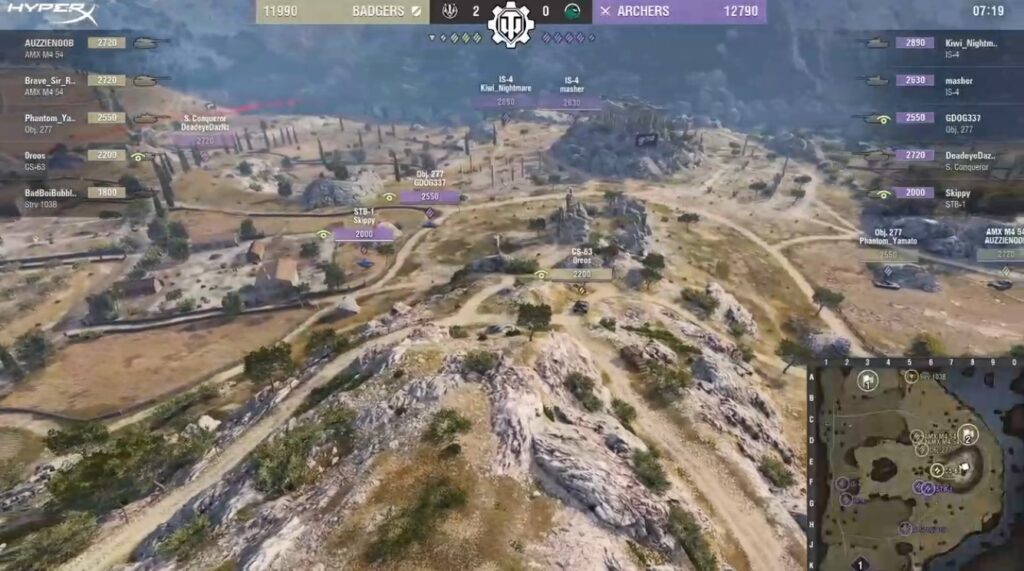 The Archers were having a tough start to the season while the Badgers showing why they were the Season 3 runners up. Could the Archers turn their season around or would the Badgers continue to show their strength?

The Archers started on attack of their map pick. They moved quickly towards to 2 flag as the Badgers’ BadBoiBubbles spotted their movement. He lost half his health but it stalled the Archers movement. It allowed the Badgers the opportunity to rotate south while BadBoiBubbles to rotate in his CS-63 through the north and come in behind his opponents. GDOG337 from the Archers started the cap but the delay in doing so meant the Archers bled too much. When Slippy went down the Badgers found their overmatches and took the first win of the night.

Moving to defence, the Archers sat in the middle, not committing to defending either flag well. The Badgers scouted and found that the Archers weren’t where they expected and set up for a 1 flag push. Kiwi_Nightmare from the Archers went down giving the Badgers the advantage. When the reset shot came in the Badgers surged forward. They found their picks and went up 2-0 on their opponents’ map pick.

Moving to the Badgers’ map pick, the Archers were desperate for a win. They moved to standard attacking positions at the foot of the hill and around the donut. Skippy from the Archers pushed too far up the hill. He took a lot of damage and had to retreat. The Badgers were able to peak over the ridge and removed GDOG337 from the game. It was a game of dominoes after that as the Archers’ tanks fell and the Badgers go up 3-0.

The Archers were looking to salvage some pride in their defensive game on Cliff. They moved to the middle, but the Badgers were quicker. Taking control of the hill the Badgers found themselves in a great position. Masher from the Archers was the first to go down and they were in trouble. The Badgers were able to pick their targets and take out the Archers for the loss of only one tank.

The Badgers defeat the Archers 4-0, the third 4-0 defeat they’ve received this season. 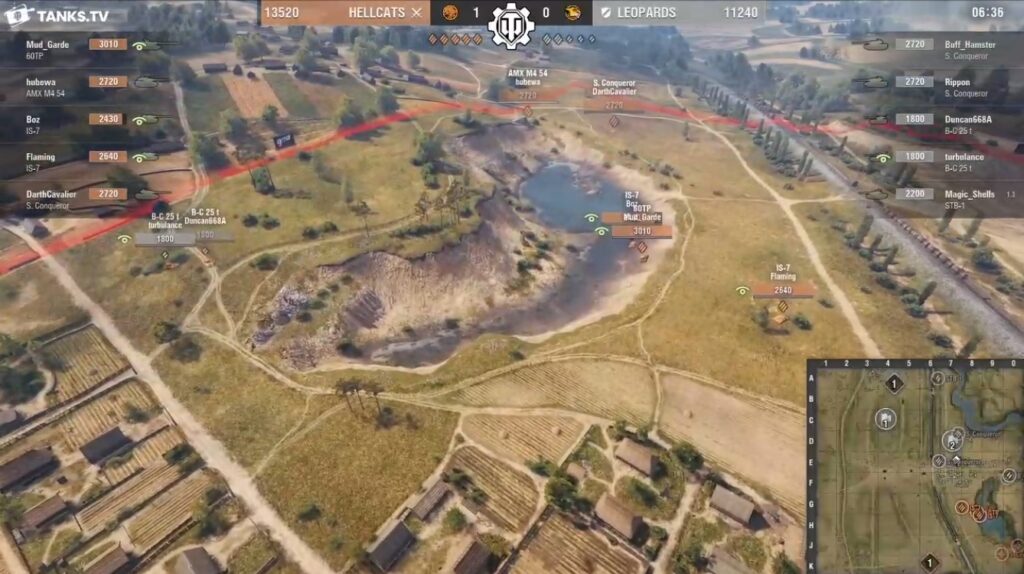 The Hellcats were showing a lot of improvement from Season 3 while the Leopards have had a trial by fire in their re-entry to the ANZBL. Who would emerge victorious?

The Leopards started on attack of their map pick. They moved to the eastern side of the train line and pushed towards the 2 flag. Meanwhile the Hellcats had set up a 1 flag defence. Hubewa from the Hellcats had set up at A6 so he spotted Magic_Shells as he pushed deep along the train line. The game settled into a bit of a stalemate with no cap pressure from the Leopards. Time was against the Leopards though. Both teams had taken a bit of bleed damage but it was the Hellcats that did it better. They removed two of their opponents’ tanks as the clock ticked down. The Hellcats take the opening game with a timed win.

The Action moved to the Hellcats’ map pick. They started on the defence and committed to a heavy 1 flag defence. The Leopards grouped up and ran the A line towards the 2 flag. They started the three tank cap as the Hellcats rushed to find a reset. Hubewa found the reset but paid heavily for it. More reset shots came in as the Leopards looked to remove Mud_Garde. A brawl ensued as the Leopards made the most of their HP advantage. It came down to a 2v2. Hubewa tried to run and hide as he became his teams last remaining tank. He got a kill onto Duncan668A but couldn’t clear out Buff_Hamster as the Leopards took the win.

The Leopards started their Sand River defence focused on the 2 flag, but had one tank looking at the 1 flag. The Hellcats moved south with one tank in the far north spotting. But being on the defence all the Leopards had to do was wait. With half of the timer already gone it was up to the Hellcats to make a move. They put Boz on the 1 flag and started to apply some cap pressure. He was quickly forced off though and the game settled into a stalemate. The Hellcats regrouped and pushed through the river to remove Turbulance. But they’d bled a lot of HP. When the Leopards struck back it was virtually over. The Leopards found some more picks and delayed the Hellcats enough to pick up the timed win.

The Leopards defeat the Hellcats 3-1. 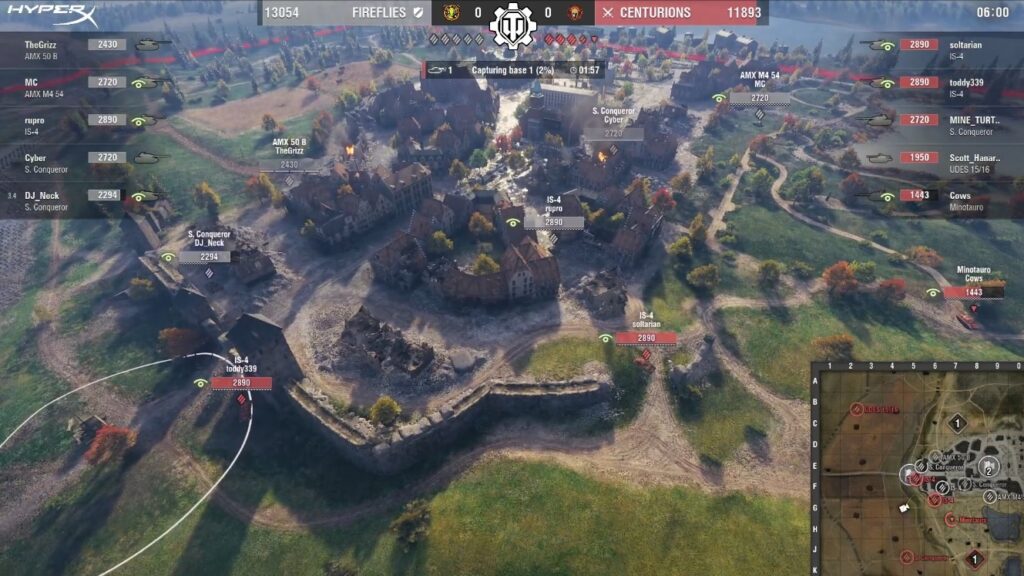 The action opened on the Centurions’ map pick. They started on attack by spreading in the south. Pushing a tank onto the 1 flag, they set up well to provide support. Meanwhile the Fireflies grouped up in the city. DJ_Neck from the Fireflies got the reset as his teammates isolated Cows and removed him. TheGrizz also from the Fireflies did well in a 2v1 and survived to let his teammates come to his aid. Meanwhile the remaining two Centurions were in a 2v2. The two Firefly tanks held them off long enough for reinforcements. The Fireflies take the opening match.

Moving to defence on the return leg, the Centurions only sent one tank into the town as the rest went straight to the 1 flag. This played into the Fireflies strategy of going for the 2 flag. They started the cap and waited for the Centurions to make their move. It didn’t take long. The Centurions came through the city and traded kills. The Fireflies got some luck with an ignite but made the most of their focus fire in the brawl to go 2-0 up on their opponent’s map pick.

The Fireflies were looking to secure the win in three matches as the action moved to their map pick. They started on defence as they spread on the western side of the map with a Super Conqueror at A6. The Centurions ran four tanks down the 2 line but were spotted early. They made the decision to try and pick off MC. Meanwhile the Fireflies’ Cyber was in trouble in his 1v1 against Solitarian. It was a 2-for-1 trade with the advantage towards the Centurions. The Centurions made the most of their angles to bleed the Fireflies down and took the first win on Prokhorovka.

The Centurions went for a heavy 2 flag defence with Scott_Hanaray at A6 to watch the 1 flag. Meanwhile the Fireflies were being cautious, waiting along the ridge on the F line. TheGrizz from the Fireflies was punished by the Centurions rotating double IS-7s to the far north. He survived but his teammate DJ_Neck went down. The Fireflies started the 1 flag cap to bring in the Centurions but being a tank down made the going hard. Cows got the reset which forced the Fireflies off the cap and into the fight. When rupro went down it was virtually all over for the Fireflies. The Centurions take both matches on their opponent’s map pick to send the game to a tie breaker.

With the fastest win in this game, the Fireflies chose to defend Himmelsdorf. The stars seemed to align as both teams headed for the 1 flag. Both teams were wary of crossfires. The Fireflies did a lot of early bleed damage onto their opponents, but the Centurions slipped the net. They regrouped in the south east looking for a cross along the banana towards the 2 flag. Cows spotting from the hill took a shot, letting the Centurions know they were being watched. The Centurions rotated to the south west again and got some decent damage onto Rupro. The match came down to a 3v3 in the final minute of the game. But it was the Fireflies that emerged victorious.

The Fireflies defeat the Centurions 3-2. 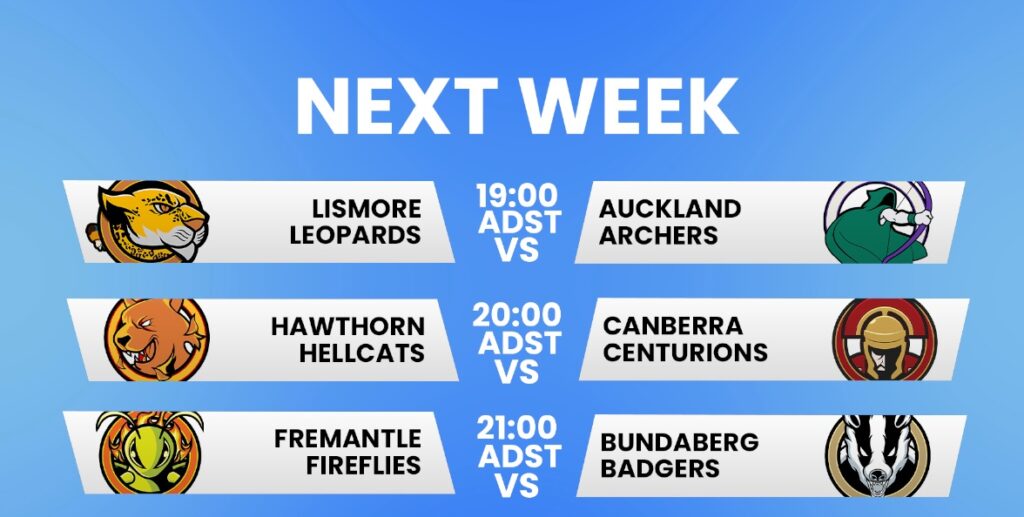 The Leopards take on the under siege Archers to open Round 4 before the Hellcats face the Centurions. In what must be the game of the night, ladder leaders the Badgers come up against new-comers the Fireflies.

Tune in from 7pm ADST Mondays at https://twitch.tv/worldoftanksanz for more tank action!