World Of Tanks ANZBL Season 4 Round 5: Bring On The Playoffs!

World Of Tanks ANZBL Season 4 Round 5 puts us on the doorstep of playoffs! Who made the cut? Who’s season is over? Let’s find out! 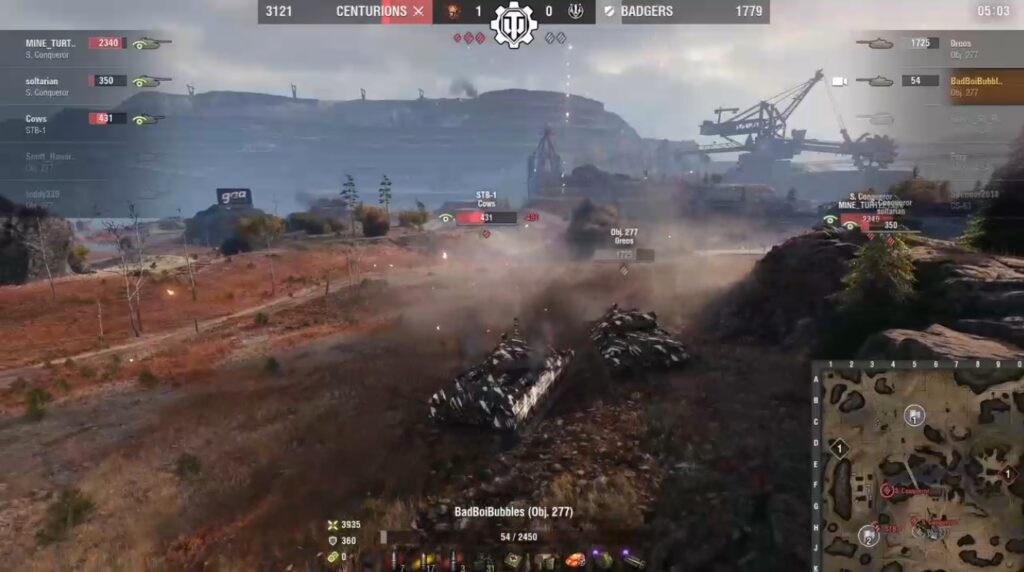 The Badgers suffered their first loss of the season last week and were looking to bounce back. Meanwhile the Centurions were looking to consolidate their playoffs ambitions.

The Centurions moved to attack on the return leg. They moved in numbers and quickly had two tanks on the 2 flag. In an un-Badgers-like move, the Badgers had spread their defence and had to rotate to defend the 2 flag. A brawl ensued with the Centurions’ focus fire dealing great damage. The Badgers struck back and made it a 3v3 but the HP advantage was with the Centurions. They exercised that advantage and took both matches on their opponent’s map pick.

Looking to salvage some pride, the Badgers moved to defence. They set up for a 2 flag defence. Soltarian from the Centurions was spotted, giving the Badgers some information. BadBoiBubbles scouted deep south and managed to get in a couple of shots on Toddy339 after getting some air over the train line. Other than that the Badgers seemed content to wait for the Centurions to come to them. BadBoiBubbles continued to punish Toddy339, this time on the hill. The Centurions sent Scott_Hanaray to the 2 line to scout for a 1 flag push but was removed by excellent long range shots. That was the signal for the Badgers to dump over the train line onto Mine_Turtle, who wasn’t long for this world. The rest of the Centurions fell in quick succession giving the Badgers a win.

The Centurions defeat the Badgers 3-1. 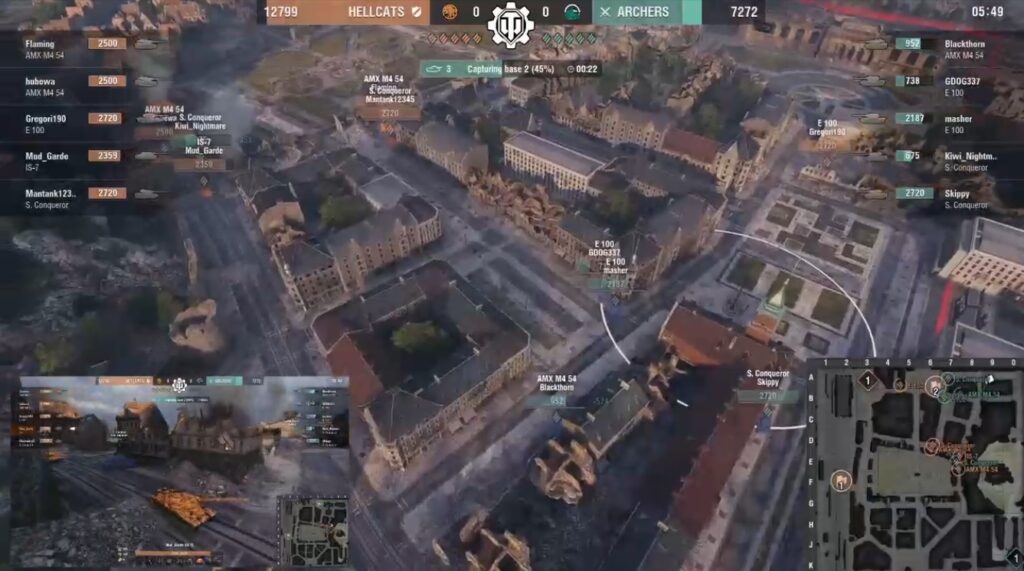 The much-improved Hellcats were looking to secure themselves a playoffs berth. While their season hasn’t been the best the Archers were desperately looking for their first match win, not wanting to go 0-20 for Season 4.

The Archers started their map pick on the attack. They sent one tank up the hill as the rest grouped at G8. Meanwhile the Hellcats set up around the north of the courtyard. The Archers ran the banana along the 8 line but copped a lot of damage on the cross. Kiwi_Nightmare from the Archers found himself holding off three Hellcats before he went down. He’d done his job though as his team mates had a three tank 2 flag cap going. The cap was almost done when two of the Archers decided to get aggressive. This proved to be a mistake as they most likely would have won if they didn’t drive off. They got the kill but by then the Hellcats were on the 2 flag and had removed the tanks there. The Hellcats mopped up the rest of the Archers and took the win.

On the return leg the Hellcats sent three tanks up the hill for their attack. The Archers had set up heavily for a 2 flag defence. After not much movement the Hellcats sent two of their tanks towards the 1 flag and found the overmatch onto a disconnected Blackthorn. It also drew the Archers’ attention south as the other three Hellcats tanks moved onto the 2 flag. The Archers responded by sending two high HP E100s to get the reset shots. The Hellcats had the angles though. They took down Skippy and Kiwi_Nightmare before dumping their forces onto the dual E100s. The Hellcats took both matches on their opponent’s map pick.

The action moved to the Hellcats’ map pick. Desperate for a win the Archers went deep to the north and starting the 1 flag cap. Hubewa from the Hellcats played a great 1v2 game. He took down one opponent and had the other on half HP before he went down. The Archers moved three tanks onto the cap forcing the Hellcats to dump onto them. The play worked for the Hellcats as the brawl came out in their favour as they took the win.

In the last round for their season the Archers moved to defence. They spread to the south with two tanks as the other three heading into the northwest of the town. The Hellcats looked for a way in from the east of the town. They pushed onto the 2 flag and waited for the Archers to rotate. The Archers found the reset shots but had bled so much HP. Sensing that the end was near the Hellcats pushed off the cap and removed two tanks. GDOG337 from the Archers found the kill onto the Hellcats’ Gregori190 but the exchange left Blackthorn on 88 HP, effectively taking him out of the game. The Hellcats found the picks onto the remaining Archers tanks and removed them, taking the win.

The Hellcats defeat the Archers 4-0. 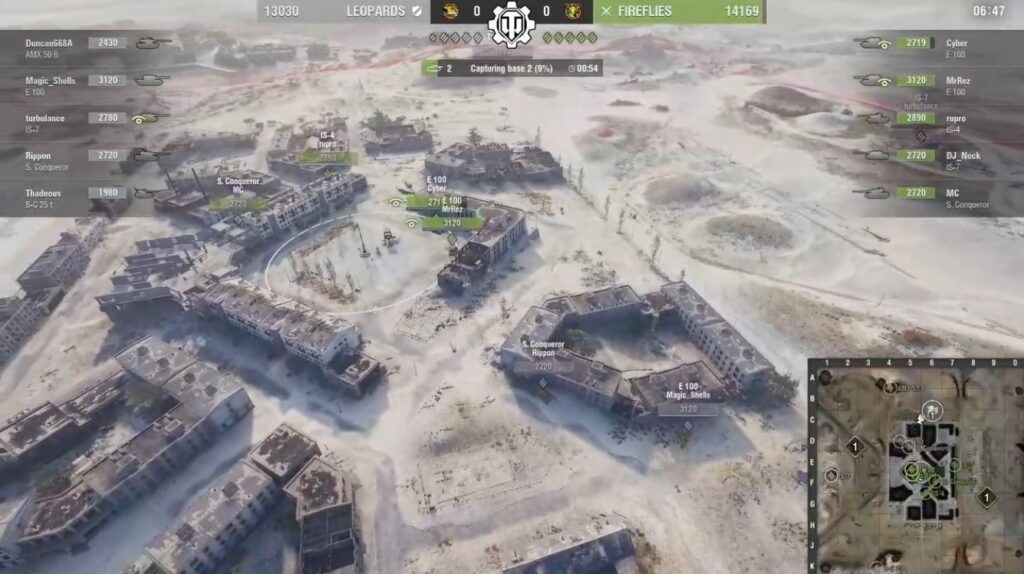 With the way the games tonight had gone the Leopards had a chance. If they were able beat the Fireflies, they’d secure a playoffs spot at the expense of the Badgers. For the Fireflies, a win meant locking down top spot in their maiden ANZBL season.

The Fireflies started on attack of their map pic. They moved into the west of the town towards the 2 flag. The Leopards rotated looking for a way to get reset shots. With two large HP tanks in the E100s on the cap it was going to take a lot to bleed them down. The Leopards continued to harass the capping Fireflies but health was becoming an issue. It came down to a 2v1 in favour of the Fireflies which they took comfortably.

The return leg saw the Fireflies move to the defence. They spread to the south of the town as the Leopards headed southwards scouting for information. The Leopards moved their own double E100s onto the 2 flag with cover from two tanks at D1. Magic_Shells from the Leopards ended up in a hole and got farmed. The Fireflies got the full reset as well, making the Leopards’ life harder. The dominoes started falling and the Fireflies emerged victorious.

The action moved to the Leopards’ map pick. They started on defence and went for a pretty standard defensive setup. Spread for the order of the day for the Fireflies as they scouted for information. They moved onto the 1 flag looking to draw the Leopards in. The Leopards chose to push over the ridge at D6 and bled a lot of HP. They were lucky to get the reset in to stop the cap but the damage had been done. The Leopards pulled it back to a 3v3 but the HP advantage was with the Fireflies. With that advantage the Fireflies took the win.

The final game of the round robin saw the Leopards group up and run the A line towards the 2 flag. They found a pick onto DJ_Neck from the Fireflies and found a 2v2 at A9 that they won. MC from the Fireflies got a kill onto Magic_Shells but he was on his own and it was too late. The Leopards took the win.

The Fireflies defeat the Leopards 3-1.

Mud_Harde (255.9) and Hubewa (246.9) from the Hellcats scored more Fantasy points that others on the Fantasy Team Of The Week but were unable to be selected due to Fantasy League rules. 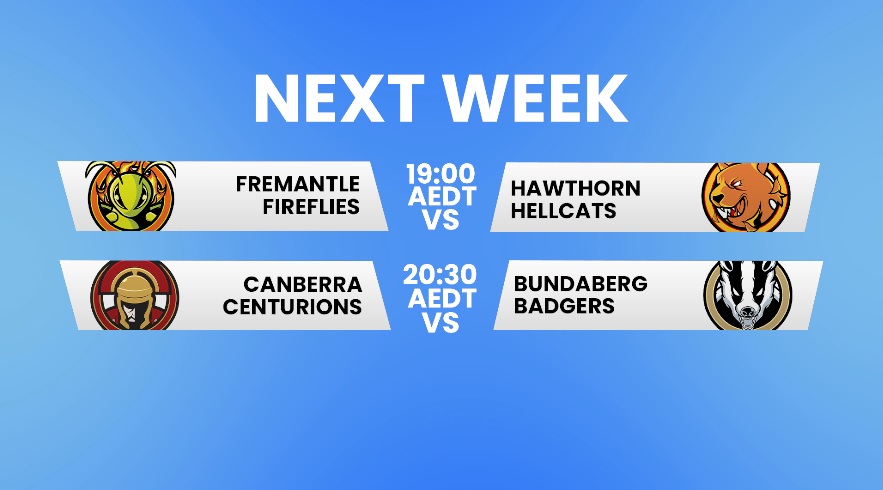 We say goodbye to the Archers and the Hellcats as we enter the first week of playoffs. The action starts at 7pm AEDT with the Fireflies taking on the Hellcats. With longer games the Centurions Vs Badgers playoff match will start at 8:30pm AEDT.

Tune in from 7pm AEDT Mondays at https://twitch.tv/worldoftanksanz for more tank action!