World of Tanks returned last week with ANZPL Season 5 Round 1 kicked off last Friday. With returning players as well as the return of the Cairns Comets to the ANZPL, Season 5 is promising to be the best yet!

There’s been a couple of changes to the ANZPL this season. Firstly is that map picks are now submitted one hour prior to the start of matches and teams cannot pick the tie breaker map. The Christchurch Conquerors have also rebranded to the Melbourne Matildas due to the number of state representatives. Each team must have at least three players from their home state.

The Action X may not have made finals in Season 4 but some handy pick ups in the draft could prove to the difference in their season. In their way was Season 4 runners up the South Sydney Skorpions. With their unchanged line-up the Skorpions have team consistency on their side. 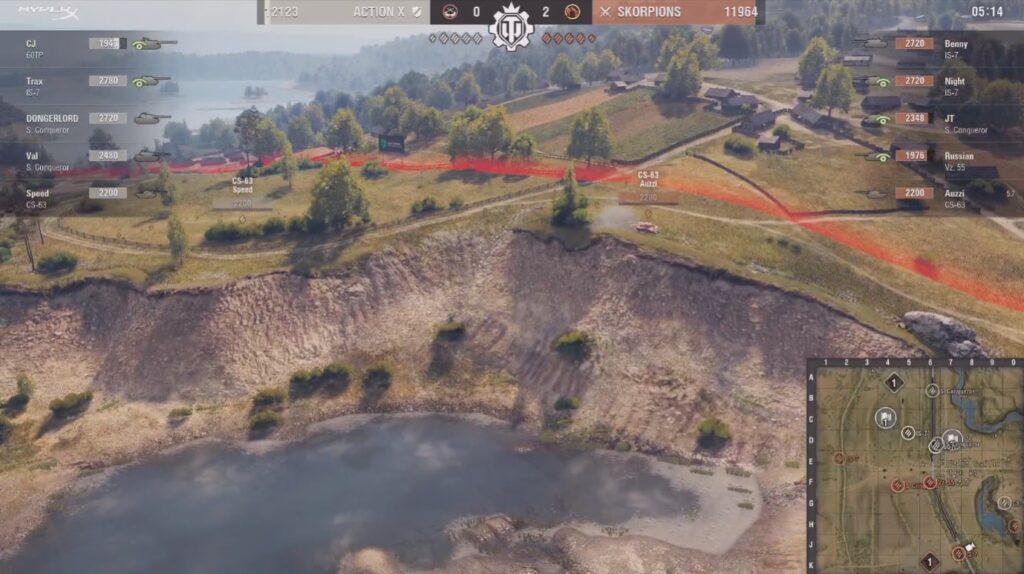 Action X’s Speed took some damage early on the return leg as the Skorpions set up a strong defence. The Action X moved two tanks onto the 2 flag much like the Skorpions did, but with the Skorpions in a much better defensive position the Action X had their work cut out for them. Teams traded a kill each but the health advantage was very much in favour of the Skorpions. Eventually the Skorpions took both rounds on Action X’s map pick.

Moving to Prokhorovka, the Action X set up heavily to the east side of the map. The Skorpions scouted well and discovered this early. They moved to the western 1 flag. Trax of the Action X managed to cross the train line without damage to provide some cover on the west. Action X pushed over the train line but CJ took a lot of damage doing so. They managed to take two kills and isolate Skorpions tanks and take the win.

ANZBL champions the Cairns Comets made their way back into the ANZPL and facing the Melbourne Matildas (formerly the Christchurch Conquerors). 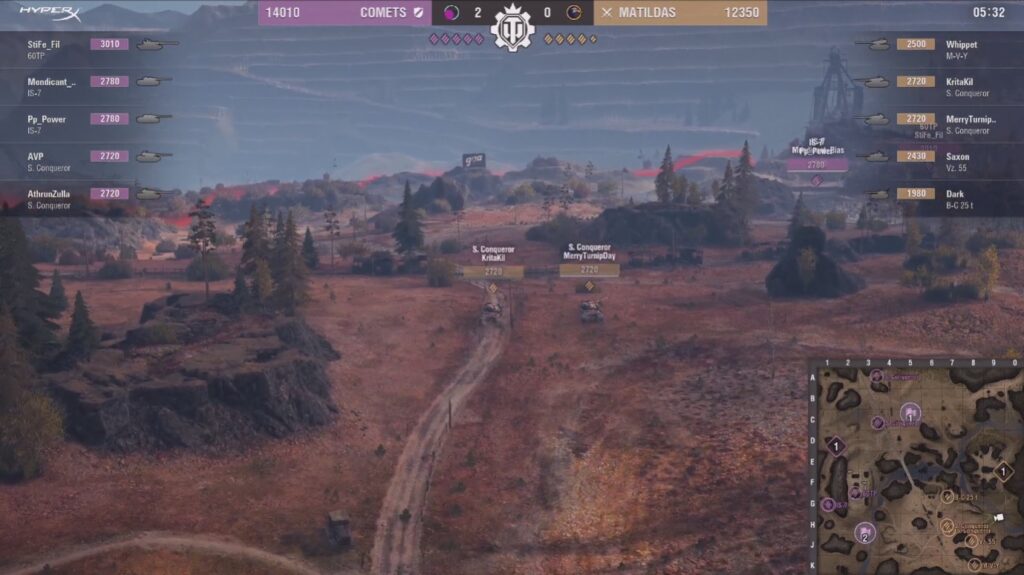 For their ANZPL return the Comets started on defence of Murovanka. The Matildas pushed hard of the 1 flag. They put three tanks on the cap. The Comets’ AthrunZulla managed to get a couple of reset shots in from G1 and AVP was able to force some resets as well. Darkknight from the Comets found an angle from the other side of the map and farmed up damage, forcing a change from the Matildas. They dumped onto AVP and Stife_Fil to take a 5v3 tank advantage. With low health tanks the Matildas were still in trouble. Darkknight rotated and found more angles for the Comets to take the opening game.

In almost a repeat of the previous game, the Comets pushed hard for the 1 flag. The Matildas were ready and got shots into Pp_Power and Stife_Fil. Despite the HP deficit the Comets had taken some good map control and moved two tanks onto the cap. The Matildas were capable of responding but left their push too late. They were unable to get the resets in and the Comets were able to complete the cap to take an early 2-0 lead.

Hunting for their first win, the Comets set up a standard defence of Tundra. The Matildas pushed across to the two flag, pulling back just as Whippet was spotted. Whippet held the Comets’ attention as three of the Matildas were able to cross without being spotted. They pushed onto Stife_Fil at F3. Stife_Fil did well in his 1v3 but eventually went down as the Comets rolled in. AthrunZulla and Saxon were traded but the healthier Matildas tanks had the upper hand. The Matildas take the win.

Looking to force the tie breaker, the Matildas also opted for a fairly standard defence of their Tundra map pick. The Comets spread along the eastern side of the map trying to get vision on the Matildas. They eventually moved south and put one tank on the 2 flag. The Matildas dumped onto Mendicant_Bias on the cap and made no mistake in removing him. They rolled onto the rest of the Comets, taking the second game and forcing this round to a tie breaker.

The tie breaker game opened with the Comets on defence. Being a fairly popular map both teams started with standard openings. The Comets set up in the north-western section of the map, not committing too hard to either flags.  Meanwhile the Matildas sent tanks along the 7/8 line, indicating a 2 flag push. Dark and MerryTurnipDay from the Matildas started the cap pressure as the Comets committed to the brawl. Matildas’ Dark went down early but both teams traded kills. With the game down to a 2v2, Matildas’ Saxon found himself isolated before going down. Whippet from the Matildas removed Darkknight, taking the game to a 1v1. After a brief game of cat and mouse, Stife_Fil took Whippet down, giving the Comets the tie breaker win.

The Cairns Comets defeat the Melbourne Matildas 3-2 in a tie breaker.

The last game of the night saw the Perth Panthers taking on three-time champions North Sydney Sentinels. It would be a tough challenge for the Panthers but the Sentinels have been known to drop matches early in previous seasons. 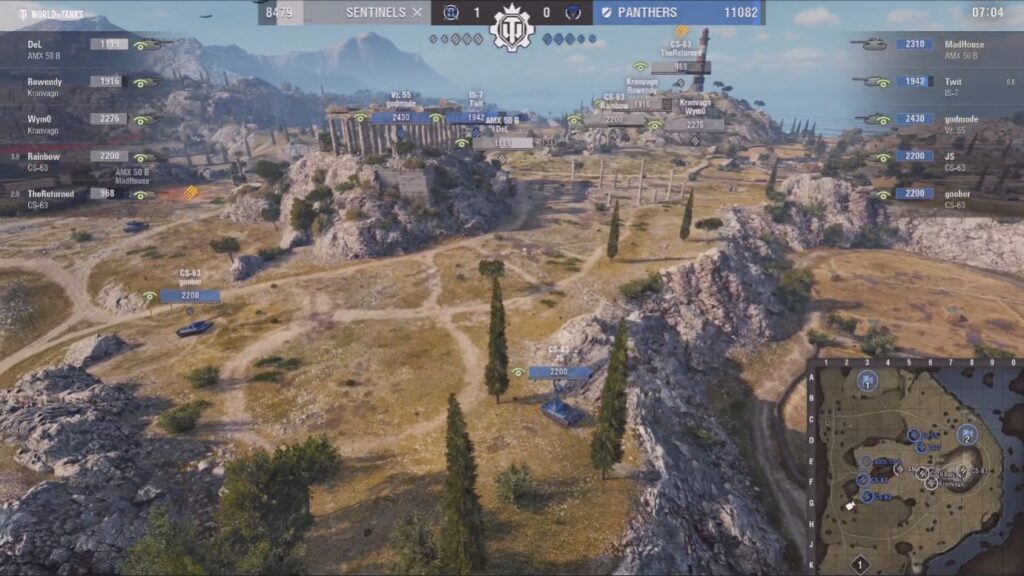 The Sentinels started their title defence defending their map pick of Cliff. They were able to isolate the Panthers’ Goober and JS, with the latter going down on the hill. This gave the Sentinels total control of the hill with a tank in the far north and south. With so much map control the Sentinels sat back and waited for the Panthers to make a move. The Panthers tried to find a way back into the fight. They eventually settled for a 1 flag push but the Sentinels setup was too good.

The action moved to the Panthers’ map pick of Ghost Town. Starting on attack, they scouted the 0 line as the rest of the team pushed into the south east of the town. They slowly moved around to the north of the 2 flag. All the while the Sentinels were able to bleed the Panthers down and remove Twit. The Panthers started the cap and the Sentinels pushed in to get the resets. The Sentinels with the ensuing brawl to take the win.

The final game of the night saw the Sentinels pushing into the town on attack. The Panthers looked to defend quite aggressively to the western side of the town. They were able to halve Del’s health. The Sentinels moved through the town centre and traded Del for Panthers’ MadHouse. A good brawl from the Panthers helped in a very close battle. Eventually the Panthers took a 2v1 tank advantage and get a win.

The North Sydney Sentinels win 3-1 over the Perth Panthers.

The Matildas featured in this week’s NAZPL Fantasy Team Of The Week with Whippet (362.1) and KritaKil (311.9) making an appearance. JT (316.7) from the Skorpions and TheReturned (287.4) from the Sentinels made their presence known too. The Comets’ AthrunZulla (271.6) rounded out Round 1 and marked his teams’ return to the ANZPL. 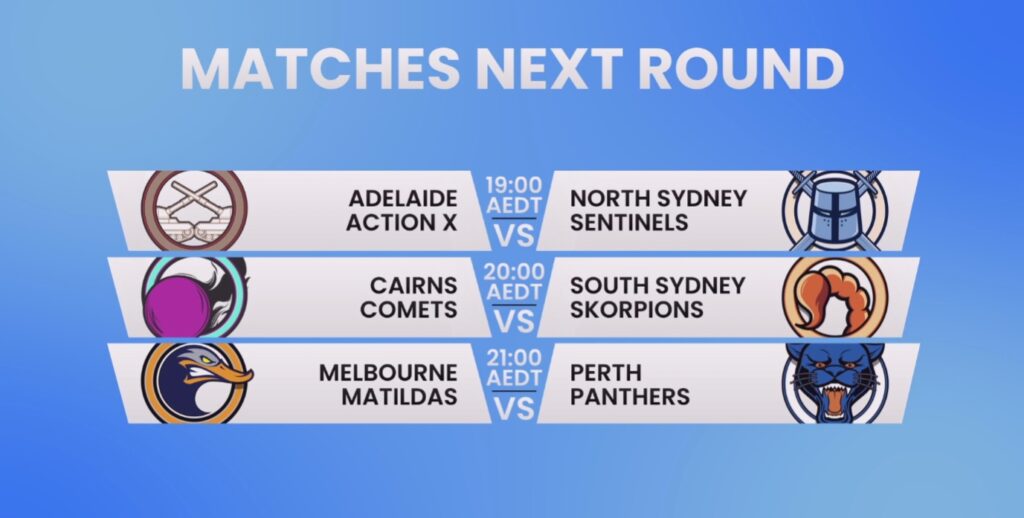 With ANZPL Season 5 Round 1 done and dusted, eyes turn to Round 2. The Action X’s rough draw continues with their next opponents being the Sentinels. The Comets are set to test their mettle against Season 4 runners up the Skorpions, and the Matildas will be out for blood against the Panthers.