World of Tanks ANZPL Season 5 Round 2 showed us that there’s room for surprises. The new patch brought out some different tank choices. How would the new patch affect the matches? Let’s find out! 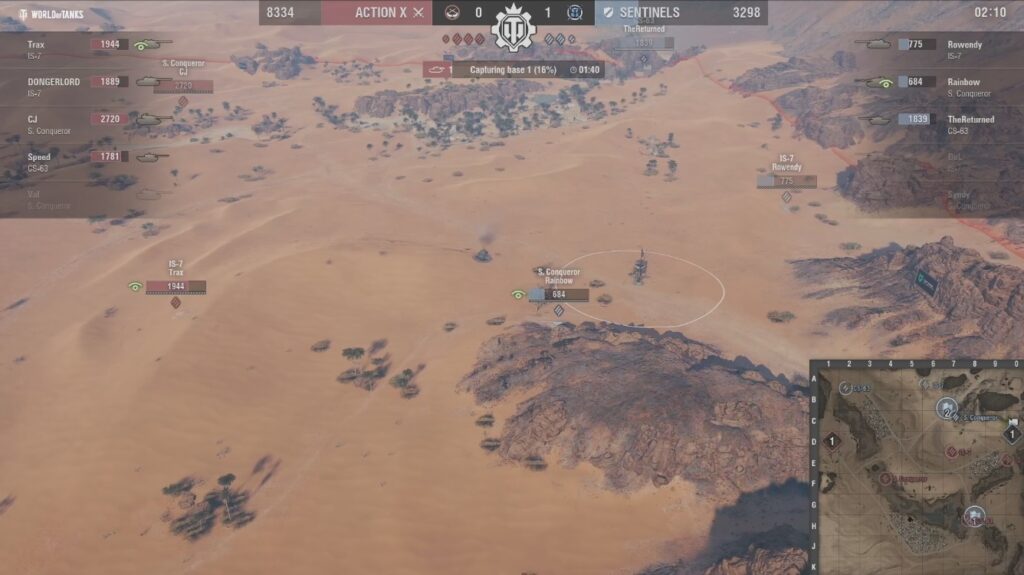 Action X had a rough start in Round 1, going down to the Skorpions 3-1. On the other hand, the Sentinels made short work of the Panthers with a 3-1. Could the Action X take down the reigning champions and secure their first win of the season?

Action X started on defence of their map pick with a heavy move towards the one flag. The Sentinels brought two AMZ M4 54 tanks, having recently received an upgrade thanks to the latest patch. Action X’s Speed found himself on the wrong end of those tanks and was the first to go down. When Action X’s CJ followed not long after things were looking good for the Sentinels. Action X were able to bring it back to a 3v2 fight but the Sentinels were too healthy. The Sentinels take attack on Sand River.

Moving to the Sentinels’ map pick of Himmelsdorf, Action X were looking for a defensive win. The Sentinels split their attention sending two tanks along the 0 line towards the 2 flag while the other three went south. The southern tanks were spotted out which caused the Action X to move more towards the 1 flag. Rainbow from the Sentinels pushed past the 2 flag to set up shots onto CJ. The Action X rotated a tank to support CJ but the damage was already done and he was eliminated. Rainbow also went down, making it one-for-one trade and with HP being fairly equal the game was still anyone’s. The clock was ticking and the pressure on the Sentinels’ attack. Action X bled a lot of HP but with time running out Action X take the win.

The Sentinels needed to take this match to send the game to a tie breaker. They set up very aggressively expecting a 1 flag push. Action X laid a trap to draw the Sentinels in. Ready in his AMX 50 B, Action X’s Dongerlord started the 2 flag cap. TheReturned bled half his health as the Action X drew in the Sentinels. Before they knew it the Sentinels were down three tanks and the Action X were on top. Eventually the rest of the Sentinels went down and Action X take the win.

In an impressive display Action X defeat the Sentinels 3-1 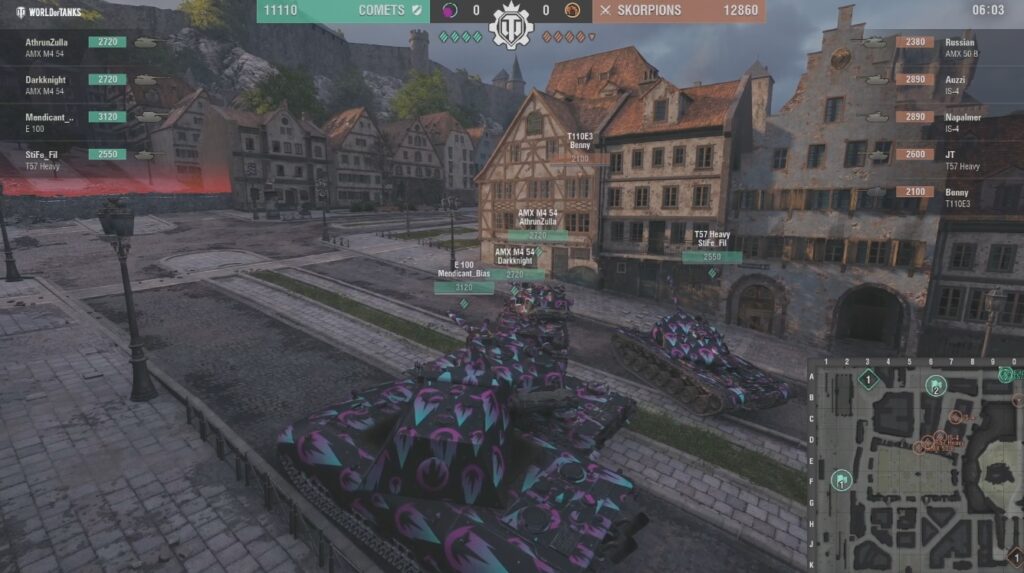 The Comets got their first tie-breaker win in Round 1 against the Matildas but this week they would be facing a much harder opponent in the form of the Skorpions. How would the newly promoted Comets do against Season 4 runners up?

With the Skorpions moving to defence against the four Comets’ tanks, the match turned into a game of patience. The Skorpions set up and let the Comets come to them. When the Comets made their move it was a slaughter. They tried to isolate Napalmer but the Skorpions had too many angles. The Skorpions get in win in just over three minutes.

Moving to the Skorpions’ map pick of Tundra the game swung even more in their favour. The Skorpions brought two M-V-Y tanks, two T100E5 and a T57 Heavy into their attack. They moved to the south. The Comets took three of their tanks and tried to discourage their opponents from the 2 flag. Eventually the Skorpions were able to get three tanks on the cap and drew the Comets in. They moved off the cap and removed AthrunZulla. With all of the Comets’ tanks bleeding HP the Skorpions get the win.

The Comets’ attack focused on the south. As they pushed towards the 2 flag the Skorpions’ Napalmer in a Progetto 65 spotted out the Comets and bought enough time for his team to rotate south. Napalmer eventually went down but had managed to get some good damage in. The Skorpions tightened the circle around the Comets and took another win.

The Skorpions defeat the Comets 4-0. 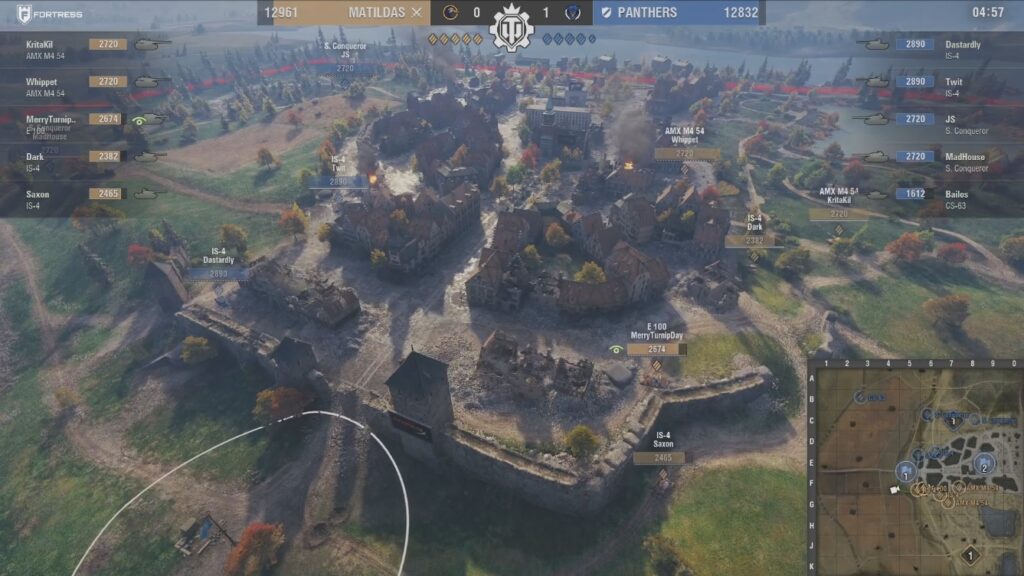 Both the Matildas and the Panthers were coming off rough games in Round 1. The Panthers were defeated by reigning champions the Sentinels while the Matildas were on the receiving end of a surprise Comets victory. With both teams searching for their first win, this was looking to be an interesting match!

Having secured two matches on their opponent’s map pick, the Panthers moved to attack on their map pick. Sending one tank along the 7 line while the rest grouped up on the hill, the Panthers got some vision and started a push for the 2 flag. That vision told the Panthers that the Matildas had committed to a 1 flag defence. That defence allowed the Panthers to set up good angles from the rotating Matildas when the cap began. The Panthers put three tanks on the cap but the Matildas’ MerryTurnipDay got their just in time to get reset shots in. A brawl commenced with the Matildas sporting a slight HP advantage but they lost the first tank. The Matildas responded by tanking two of the Panthers’ tanks. With more guns in the game the Matildas took an attacking win.

Moving to defence the Matildas were keen for the win to send this match to a tie breaker. They grouped up and moved along the 0 line towards the 2 flag. The Matildas drove passed the 2 flag and dumped onto the Panthers. In the time this was happening the Panthers have rotated making it a 5v5 brawl. The match came to a 3v3 but the Panthers had the healthier tanks. MadHouse and the Panthers’ Goober shielded each other and used focus fire to eliminate the Matildas and take the win.

The Panthers defeat the Matildas 3-1.

Round 3 kicks off with the Matildas searching for their first win of the season against the in form Action X. The Panthers are against new-comers the Comets. And we get our first Sydney Derby of the season, a rematch of the Season 4 grand final between the Skorpions and the Sentinels.