World Of Tanks ANZPL Season 5 Round 4: A Win, A Loss And An Upset

World of Tanks ANZPL Season 5 Round 4 has been fought. Who were the winners this week? Keep reading to find out! 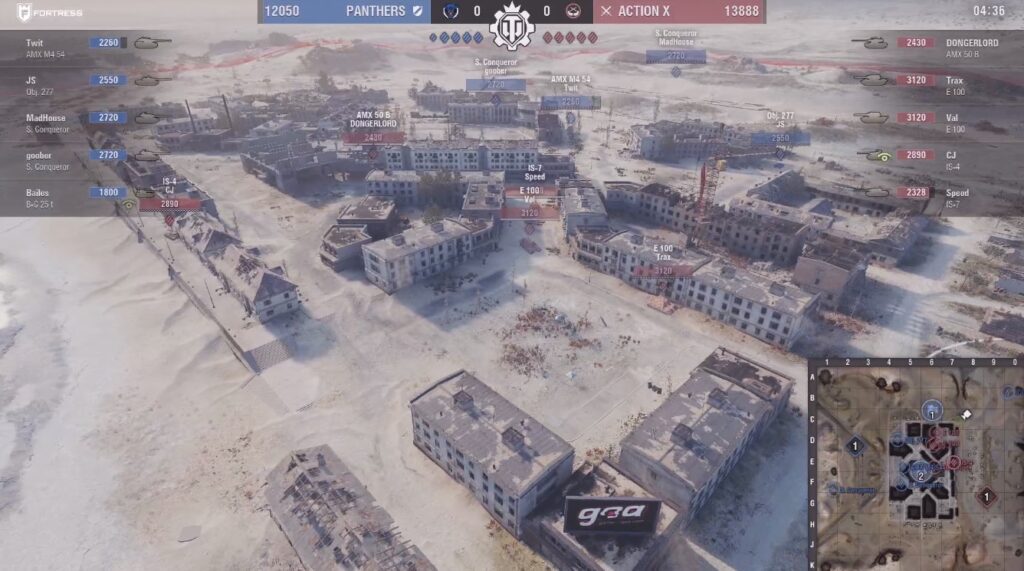 Action X and the Panthers are both part of the four teams currently in first so this one was definitely the game to watch! Who would emerge victorious and maintain their position at the top of the ladder?

The Panthers started their defence of their map pick with some good vision along the 1 and 0 lines. Action X were looking for an entry onto the 2 flag through the south of the town. They made a fake out play by pushing past the cap looking for tanks. Without knowledge they found themselves stuck in E6 before Speed pushed onto the 2 flag. The Panthers were able to get the reset and things were starting to look back for Action X. Action X forced a battle and lost two tanks quickly. They were able to bring it back to a 2v2 but the HP was in the advantage of the Panthers. That allows the Panthers to take the win.

The Panthers moved to attack. Both teams started similarly to the previous game. Action X took 1 and 0 line vision with Panthers grouping up at the south of the town. It took the Panthers a long time to make a move. Action X were happy to sit back and let the Panthers come to them. The Panthers found an angle for a brawl and isolated Action X’s Val and a 4v3 battle. They removed three Action X tanks and got themselves an overmatch. In they the Panthers take the win without losing a tank.

Action X needed a win to start their comeback. In their way was a Panthers’ defence. The Panthers started with a heavy 1 flag defence. They caught out Val but an trade in HP kept things even. Action X’s Dongerlord was not so lucky and found himself down to a one-shot. They moved to the 2 flag and tried to use the train line to separate themselves from the Panthers. The Panthers found resets and were able to bleed Action X down enough to for them off the cap. Now looking for shots onto their opponents the train line was working against Action X. The Panthers were able to clean up, taking the match and securing the win. 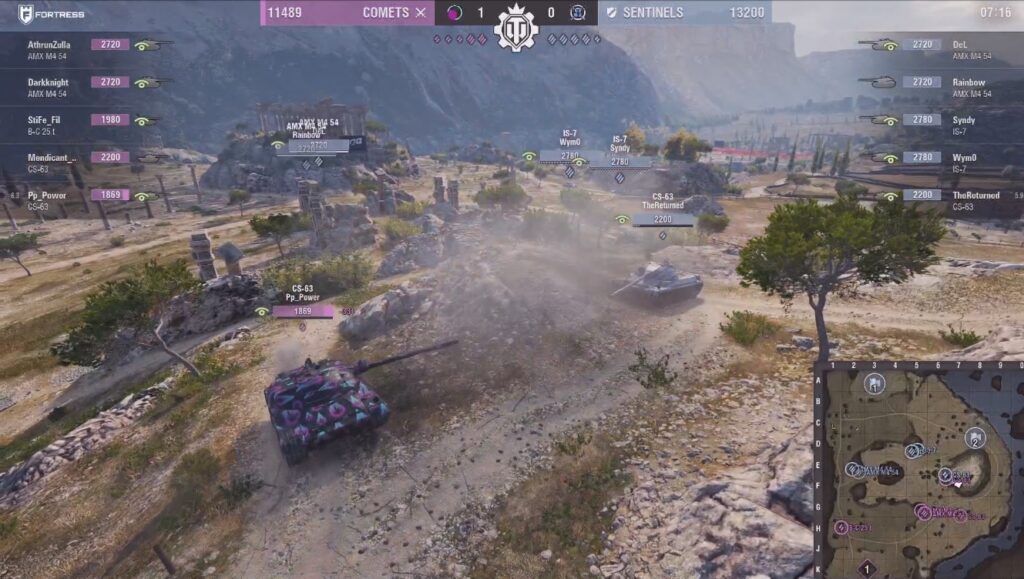 The inventive Comets took on the ever consistent Sentinels in the second match of the night.

The Sentinels moved to defence and they split their forces. PP_Power and TheReturned met again on the hill but The Sentinels had a great angle onto PP_Power. He went down granting the Sentinels control of the hill and the donut. The Sentinels slowly but surely bled the Comets down. AthrunZulla from the Comets was the last tank standing as the Sentinels took him down and equalled the match 1-1.

Moving to the Sentinels’ map pick, the Comets were searching for a win to guarantee some points. The Sentinels attack was potent and they would need to bring their A game. They started their attack pushing up the 1 line with TheReturned on the hill on overwatch. AthrunZulla went down as the Sentinels moved onto attack. Mendicat_Bias got the reset shot but bled a lot of HP to do it. He went down in a trade with Rainbow but the Sentinels were too strong. They took the win to go up 2-1.

Needing a win on their opponent’s map pick to send the game to a tie breaker, the Comets moved to the attack. It didn’t start well for them with PP_Power took a lot of damage on the hill. They pushed up the banana at the 8 line but were spotted. The Sentinels had vision and the tanks to hold the Comets. Syndy got isolated and went down first but was quickly followed by AthurnZulla and Mendicant_Bias.  The Sentinels established their dominance with 4v2 tank advantage. They quickly mopped up the two Comets tanks and took the win.

The Sentinels defeat the Comets 3-1. 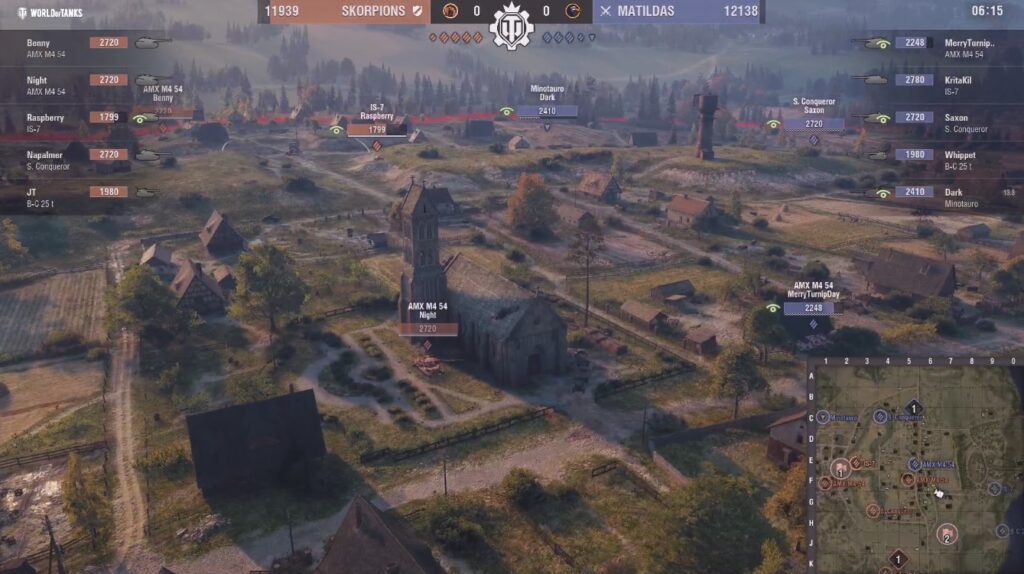 The Skorpions were looking to bounce back from last week’s loss against the Sentinels and to stay in touch with the teams in 1st. The Matildas still searching for their first win of Season 5. Both teams had something to play for.

Moving to attack, the Skorpions took a lot of mid map control early. The game had a slow build up, which favoured the Matildas on defence. Saxon from the Matildas found himself in trouble but some good cover from Whippet. He ended up going down but cost the Skorpions a lot more HP than it should have. The Skorpions’ Napalmer found himself isolated in a 2v1 and went down as well. With the HP in favour of the Matildas, they push the attack. The game came down to a 3v3 but the Matildas were able to clean up and go up 2-0 on their opponent’s map pick.

The Matildas had set themselves up going into their map pick and put the Skorpions under pressure. They started on attack with Whippet bleeding some HP. Benny from the Skorpions copped some damage in return to trade it back, but the Matildas were still looking for an angle. They rotated along the 0 line towards the 2 flag but the Skorpions were waiting. A brawl ensued as the Matildas started the cap. Not finding the hold down spots they wanted they drove onto the Skorpions. The Skorpions struck first before the Matildas removed two enemy tanks. Whippet rotated to get a better angle. Meanwhile the Skorpions took down Dark and were lying in wait for Whippet. Missed shots all round put pressure on both sides. In the end the Skorpions take the win and keep their hopes alive.

The Matildas moved to defence. Moving aggressively they crossed the courtyard and the banana. The Skorpions had the vision and knew exactly where the enemy tanks are. KritaKil bled a lot in a crossfire and when the Matildas took too long to kill Night, they were fighting an uphill battle. The match ended up in the 2v1 and the Skorpions abandoned the fight as the Matildas’ Dark tried to run and hide. Benny and Napalmer from the Skorpions jumpe don the 2 flag and started the cap. Dark had to drive from the other side of the map to even attempt to get resets in. It proved too far and the Skorpions took the win to send the match to a tie breaker.

The Skorpions found themselves on defence of the tie breaker map. They spread their defence wide to cover both flags. The Matildas sent Whippet south to scout the 2 flag as the rest of his team pushed north. Both teams settled into their positions looking for their opportunity to strike. Dark joined Whippet in the south to creep towards the 2 flag. The Skorpions must have sensed something and rotated south. The Matildas isolated JT in the North as Dark and Whippet take out Raspberry. A 4v3 eventuated but the Matildas had isolated Night to make it a 4v2. The Matildas proved too good and took the win.

The Matildas defeat the Skorpions in a 3-2 tie breaker.

Dark (387.7) and Whippet (352.0) from the Matildas topped the Fantasy Team of the Week after their tie breaker win against the Skorpions, while Raspberry (220.1) from the Skorpions also made an appearance. TheReturned (329.2) from the Sentinels and MadHouse (312.2) from the Panthers rounded out the team.

Round 5 and the end of the first round robin is already upon us! Action X will be trying to bounce back against the Comets in the first match of the night as the Sentinels look to solidify top spot against the Matildas. But the match to watch this will is last one between the Panthers and the Skorpions.