World Of Tanks ANZPL Season 5 Round 5: First Round Robin Has Been Fought

World of Tanks ANZPL Season 5 Round 5 sees the end of the first of two round robins. Teams have played each other once now. Let’s see how this round played out! 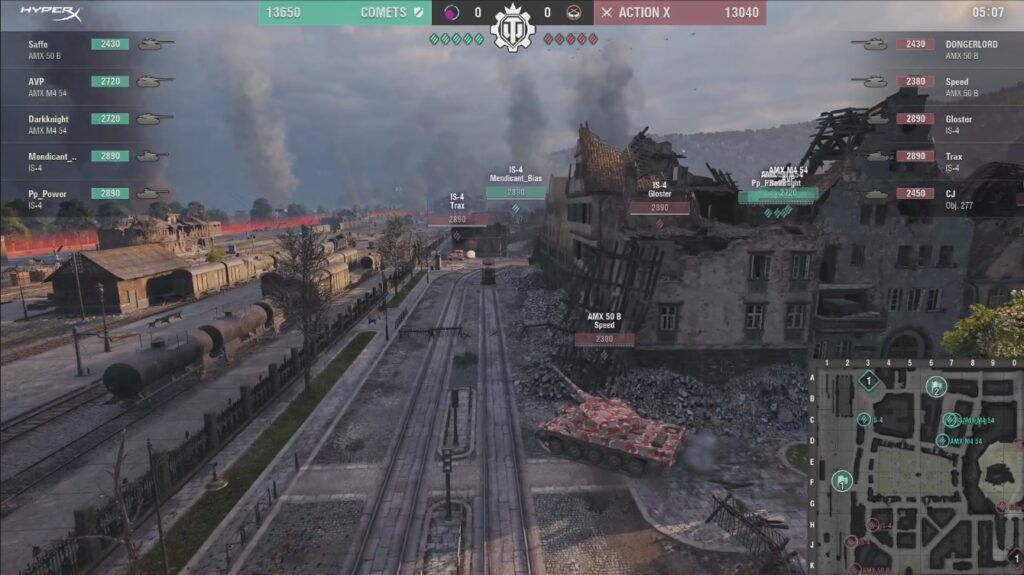 Action X were looking to rebound after last weeks’ loss while the Comets were seeking to prove their worth. Both teams needed a win, Action X to help solidify their spot in the top four, Comets to inch close to a top four appearance.

The Comets started on defend of their map pick. They took a non-standard position with three tanks at C7 and another at D7 lying in wait. Action X Sent two tanks to the hill with the others looking towards the south. When the Comets’ Mendicant_Bias saw Action X’s Trax moving onto the 1 flag his team mates knew they had to rotate. They came down the banana along the 8 line and caught CJ unaware. He went down as Action X came off the cap and tried to isolate Mendicant_Bias. With Dongerlord on the hill the Comets were able to create a 4v3 engagement. Reducing Action X to two tanks, it was only a matter of time before they fell. The Comets take the first match.

Switching to attack, the Comets tried to run the banana but Mendicant_Bias was spotted. His two team mates remained unlit though, so Action X didn’t have all the knowledge. The Comets regrouped and pushed all their tanks up the hill. Pushing down the other side they were spotted by Action X’s Speed. Shots were traded but Speed was very isolated. The teams traded three-for-three as the brawl continued. When Action X’s CJ went down, it was up to Dongerlord. He tried to put some distance between him and the remaining Comets tanks. The Comets started applying cap pressure which forced Dongerlord to try for reset shots. He was drawn in and went down. The Comets take a 2-0 lead.

Action X started on attack of their map pick. The Comets too an aggressive 1 flag defence as their own Stife_Fil bled half his health at D7. Their south aggression worked when they were able to isolate and eliminate Trax. Action X hit back by taking out two of the Comets tanks in separate plays. Dongerlord started the 2 flag cap to pressure the Comets into making a move. Having set up well Action X were able to keep the Comets at bay. The Comets’ Saffe and Darkknight were able to get an overmatch against Speed and eliminate him while Action X’s Gloster and CJ removed Mendicant_Bias. Now in a 3v2 against low HP tanks, Action X came off the cap and hunted for their remaining opponents. Action X take the win.

The Comets sent two tanks south towards the 1 flag on their attack as Action X set up a 1 flag defence. Looking for a way in the Comets also looked to the north to get vision on Action X. They regrouped in the river and pushed towards Dongerlord. He went down as the Comets moved onto the 1 flag. Action X needed to react to the cap pressure. Gloster found himself in a battle with two Comets. With the clock ticking down the Comets put another tank on the cap to speed it up. Eventually the Comets take the win. 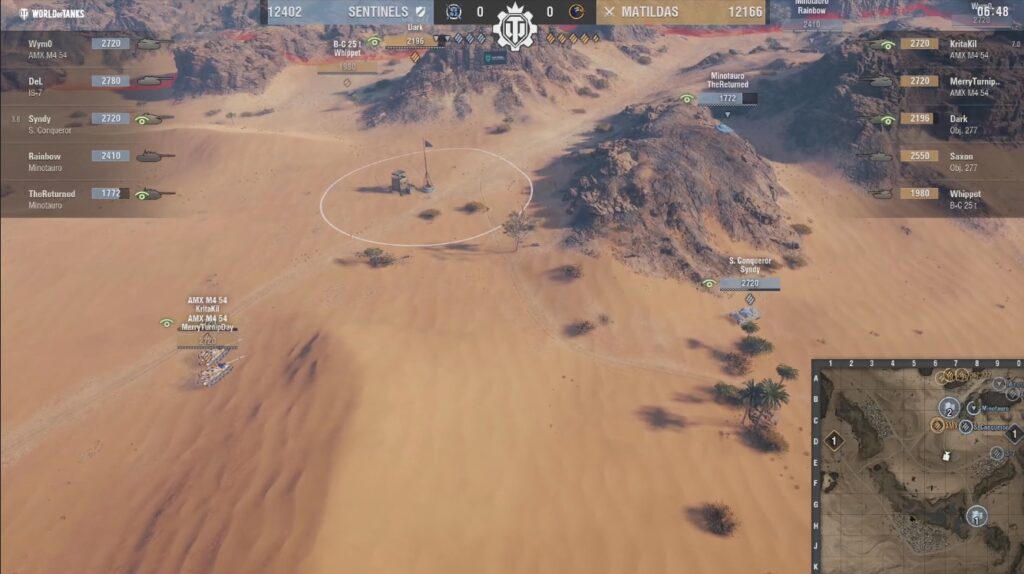 The Sentinels were riding high with only 1 loss so far in Season 5. The Matildas languishing towards the bottom of the ladder. Wins are worth their wait in gold to these teams. Who would walk away with the points?

In the second appearance of Sand River this round, the Sentinels started on defence of their map pick. The Matildas pushed quickly towards the 2 flag. They were able to get good shots into Sentinels’ Rainbow. He was collapsed upon and removed from the game. The Sentinels struck back with great bleed damage onto their opponents. With the game coming down to a 1v1 between the Sentinels’ TheReturned and the Matildas’ Dark. Dark was able to secure the victory and send his team up.

Moving to the south of the town, the Matildas’ MerryTurnipDay copped some damage early. They found their way onto the 1 flag and started the cap. Del in his B-C 25 t was able to get reset shots into the Matildas as they persisted with the cap. Eventually the Matildas abandoned the cap but they had sacrificed a lot of health for that move. The Sentinels found kills and went up 2-1.

The Sentinels defeat the Matildas 3-1. 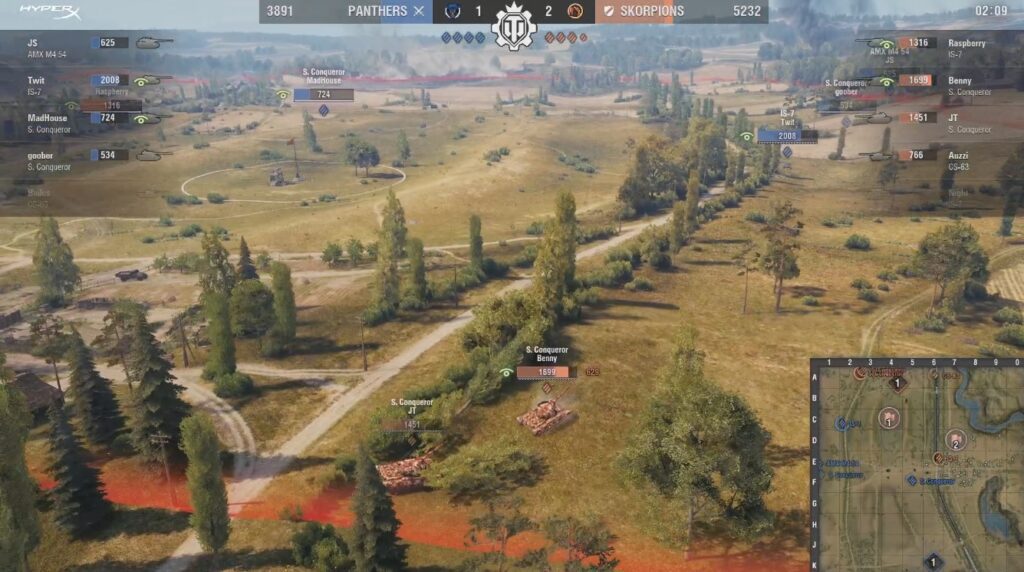 Both the Panthers and the Skorpions were looking to cement their position towards the top of the ladder. Any points would be important.

The Panthers started on defence of their map pick. They moved heavily to the south looking to lay the trap. The Skorpions fought well and found overmatches. They found two kills and bled the Panthers heavily. In the end the Skorpions defeat the Panthers with the lost of only one tank.

The Skorpions were looking to close out the match on their map pick. Pushing to the western side of the E line, the Panthers held their defence. MadHouse was able to remove Night but went down himself as the Skorpions came in for support. The Panthers brought the game to a 1v2 and were able to take a win.

The Skorpions defeat the Panthers 3-1. 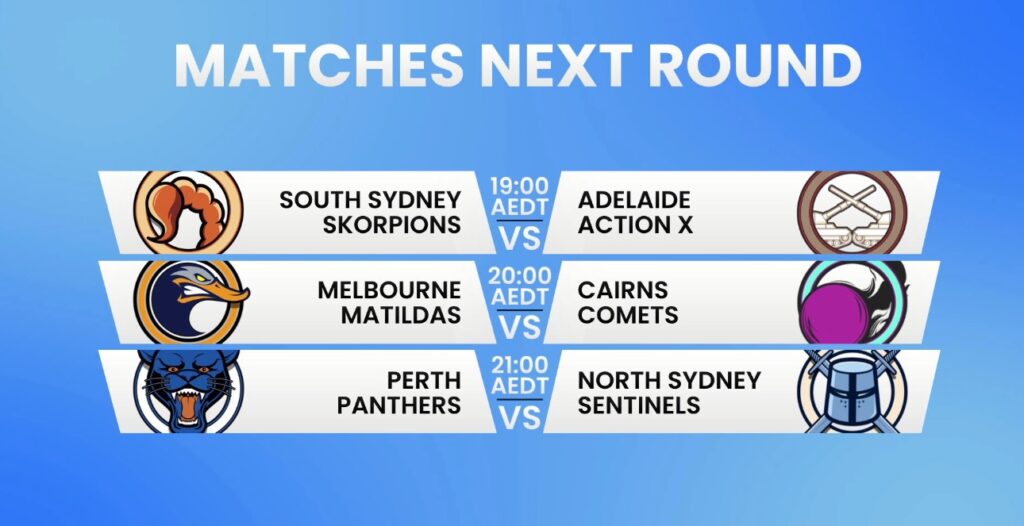 The round robin starts again next week with the Skorpions taking on Action X to open Round 6. The Matildas will be looking for revenge in their rematch against the Comets while the Sentinels seek to hold on to top spot against the Panthers.