World Of Tanks ANZPL Season 5 Round 6: Second Verse Same As The First

World of Tanks ANZPL Season 5 Round 6 sees the end of the first of two round robins. Teams have played each other once now. Let’s see how this round played out! 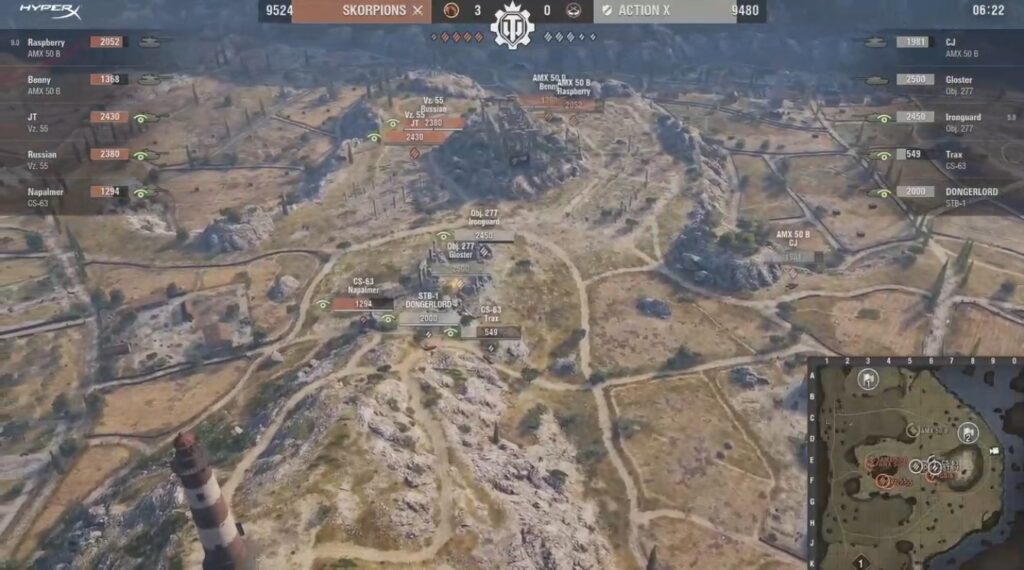 After scoring a couple of early wins the Action X were in danger of falling out of the top four. Their work was cut out for them as they were taking on the second placed Skorpions.

The Skorpions started on defence of their map pick. Skorpion Auzzie scouted along the train line in his CS-63. He was spotted out by CJ on the hill. Raspberry from the Skorpions found himself holding off two Action X tanks at the E/F line. Action X’s Dongerlord went very deep along the 1 line but when he spotted JT he backed off. His retreat lit up Raspberry and Dongerlord put a couple of shots into him. The Skorpions found a 2v1 against CJ and eliminated him. Action X traded Benny for their own Ironguard. The dominos were falling for Action X though as Gloster went down to give the Skorpions the 4v2 tank advantage. First blood to the Skoprions.

Action X moved to the defence on the return leg. The Skorpions found some good knowledge with Auzzie on the eastern side of the train line. The Skorpions grouped up for a 2 flag push. Action X sensed something was up and rotated Dongerlord in his B-C 25t far to the south. The Skorpions thought they had a good angle onto Gloster but he was traded for JT. Benny and Napalmer found the overmatch onto Trax to give the Skorpions the tank advantage. Dongerlord took a 1v1 against Auzzie to level the tank count. But Action X had the lower HP pool. Time was ticking down as the Skorpions put Napalmer on the cap. He was joined by Benny and secured the first attacking win on Prokhorovka for Season 5.

Action X started their map pick’s defence by taking early hill control. The Skorpions sent Auzzie to the hill. He and Naplamer were able to spot most of the Action X line up. The Skorpions moved round the donut and removed CJ. JT from the Skorpions copped a lot of damage but was still alive. Dongerlord rotated around the hill to try and get shots on JT but got caught in a crossfire and was killed. Finding themselves with a 4v2 tank advantage, the Skorpions used their number to take the win.

Looking to salvage some pride the Action X moved to defence. Trax bled a lot of HP early as his team settled into the ridge of the hill. Meanwhile the Skorpions had taken control of the donut. Both teams traded damage with the Skorpions slightly ahead. JT joined Napalmer on the hill but copped a couple of shots in the cross.  Napalmer rotated and took Trax out and when Ironguard went down Action X were in trouble. Dongerlord went down but Action X responded with two kills of their own. Raspberry’s death allowed a 2v1 in favour of Action X. Napalmer on 93 health tried to find a way in but against two tanks it was never in doubt. Action X take the win. 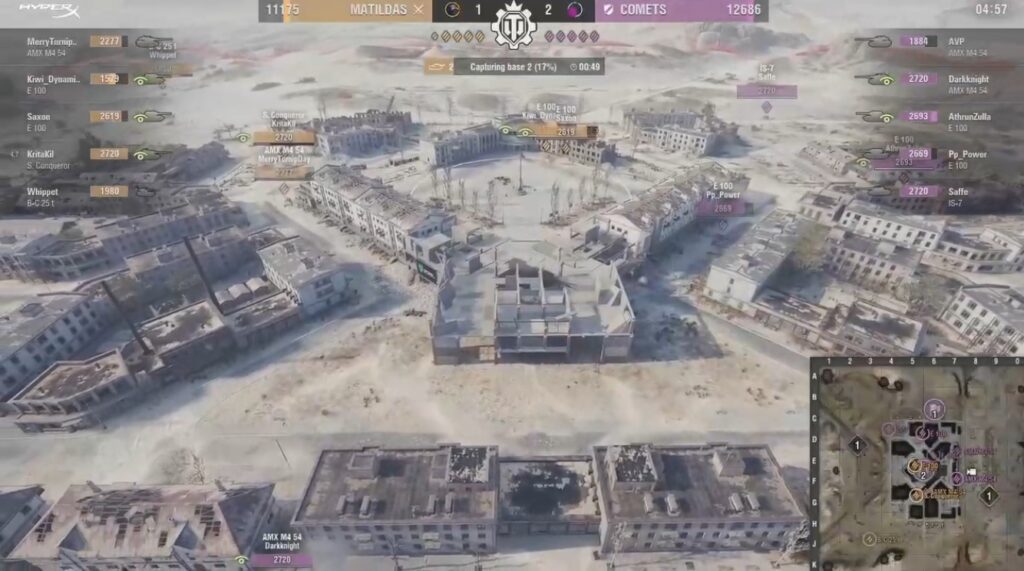 The Matildas had a tie breaker lose in their first match against the Comets and their season had not gotten better since then. With only a tie breaker win and tie breaker loss to their name they were desperate for a win. On the other hand the Comets were improving each week and would be looking climb the ladder.

The Matildas started the defence of their map pick by taking a majority 2 flag setup with one tank watching the 1 flag. Meanwhile the Comets spread out looking for a way in. Power from the Comets found himself held down against the Matildas’ Kritakil along the ridge at D6. The Comets pushed along the A line and found the overmatch against Saxon. When he went down Power and his teammate Saffe dumped over the ridge and took control of the 2 flag. The Comets’ AVP and Darkknight 2v1’d Kiwi_Dynamite. When Whippet went down followed by Kritakil, their teammate MerryTurnipDay was looking for reset shots. Superb blocking by Saffe snuffed out that hope and the Comets took the win.

The Matildas started their attack by rolling in numbers towards the 2 flag. Saffe was at the ridge and spotted the push. The Matildas dumped but Saffe was stayed alive a lot longer than he should have. His teammate Darkknight went down and the Matildas found themselves up five tanks to three. The Matildas took another two Comets down leaving only Power alive. They closed the net around him and levelled the series.

The Comets took a lot of eastern map control early on the attack of their map pick. They rotated to the south east of the town and made their play onto the 2 flag. The Comets had three tanks on the cap but pushed a full send onto Kritakil. They moved back onto the three tank cap and settled in. The Pressure was now on the Matildas to make a move. They moved two tanks in but the Comets removed two tanks in the resulting brawl. The Comets display great calling and go up 2-1.

The Matildas moved to attack on the return leg. Whippet found some good early bleed onto AVP as his teammates looked towards the 2 flag. The Matildas moved onto the 2 flag as the Comets looked to push from the north. With two tanks on the cap the Comets were able to find the reset shots. Fire was traded as the cap timer moved down to 30 seconds. Power drove onto the 2 flag to again get the reset shots. The Comets were able to remove both Matildas tanks on the cap and took the game to a 3v5. They close the net and took the match.

The Comets defeat the Matildas 3-1. 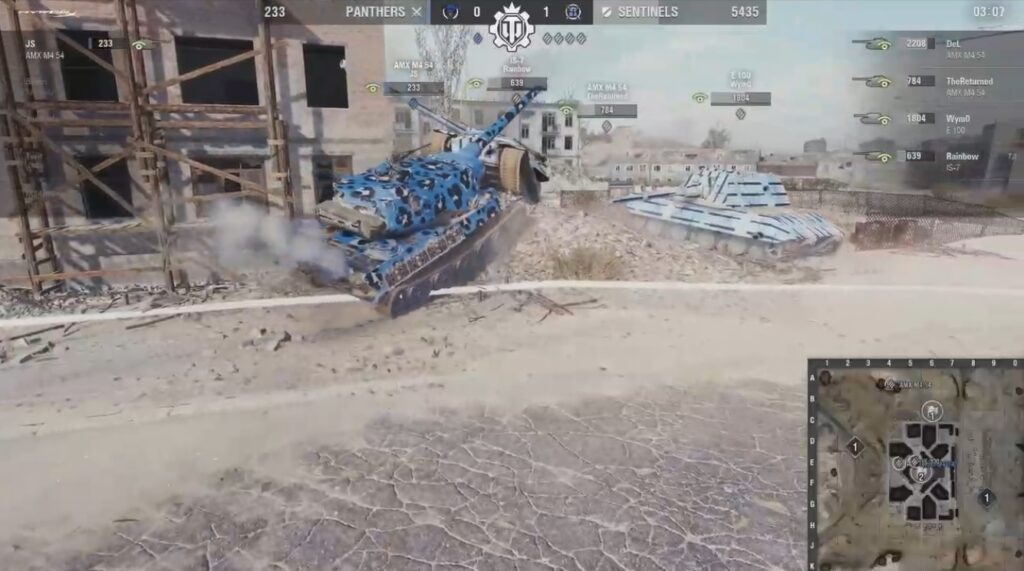 The Sentinels were sitting pretty at the top of the ladder. They were looking to continue their winning ways. Meanwhile the Panthers needed to show they could match it with the ladder leaders if they wanted to go deep into the finals.

The Panthers started their defence of their map pick well with Bailes finding shows onto Rainbow. But the Sentinels weren’t standing still either. They moved a tank onto the 2 flag and started applying the cap pressure. JS from the Panthers was able to get a reset shot in but lost half his HP. Rainbow found his footing as well holding Bailes out of the action in the middle of the map. The Panthers pushed in for the reset again and the Sentinels responded by putting another tank on the cap and bleeding the Panthers more. When Del from the Sentinels went down it triggered a brawl. The game came down to a 2v3 in favour of the Sentinels when the Panthers’ Madhouse flipped. Bailes went down without a reset. That allowed the Sentinels to take the cap win.

Desperate to salvage some pride the Panthers pushed aggressively on their attack. Madhouse got caught and lost half his health. The Panthers removed the Sentinels’ Wym0 and Rainbow quickly followed. Balies went in in a 1v1 hill battle but the Panthers had the tank advantage. The Panthers found Syndy before turning their attention to TheReturned to take a win.

The Sentinels defeat the Panthers 3-1. 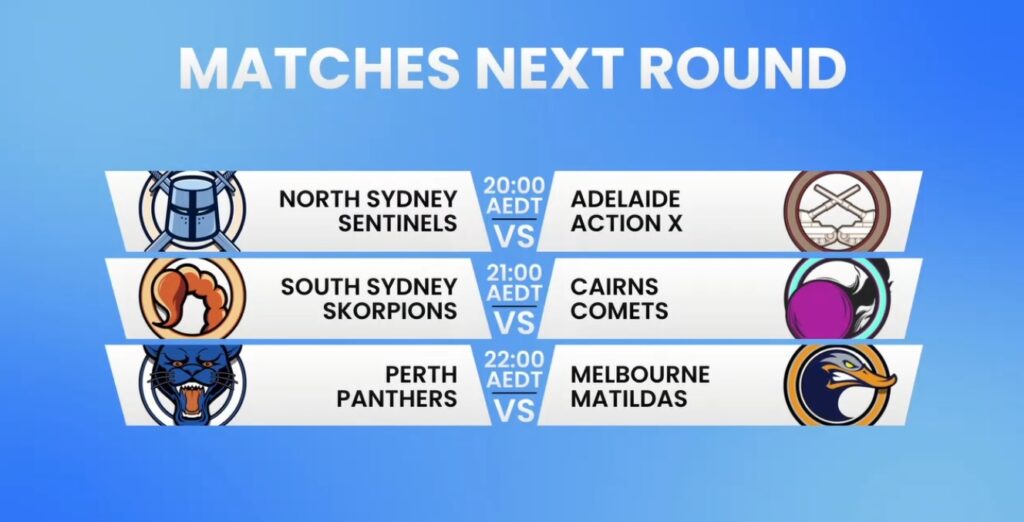 The Sentinels take on Action X in the opening game of Round 7 while the Comets are tested against the Skorpions in the second game. Still seeking their first win, the Matildas come up against the Panthers in the last game of the night.