World of Tanks ANZPL Season 5 Round 7 brought some massive upsets. Did your team come out on top? Read on to find out! 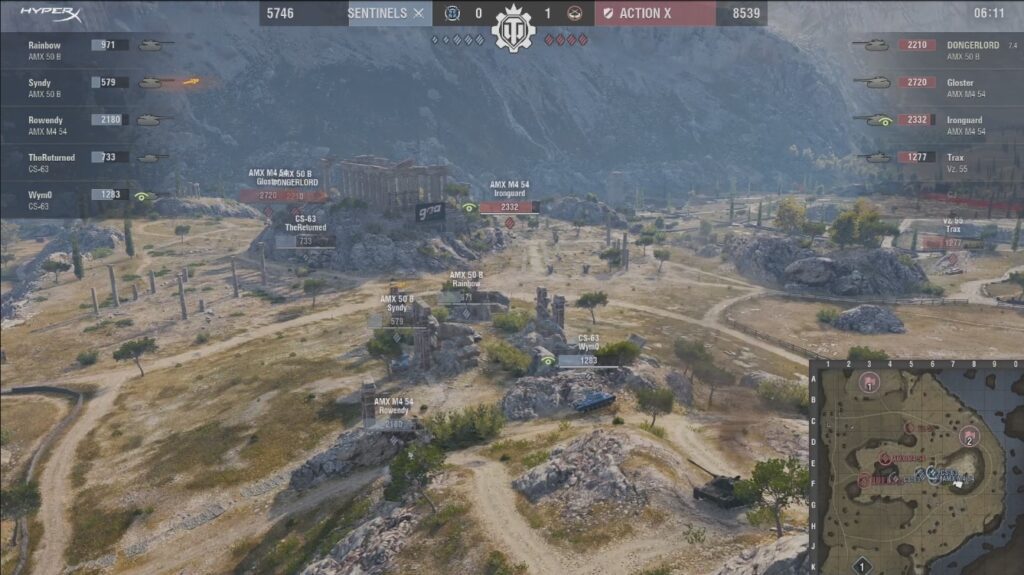 Action X were desperately seeking a win to keep in touch with the top 4. The Sentinels had only taken one loss, but it was against Action X. Would Action X repeat their earlier success, or would the Sentinels continue their winning streak?

The Sentinels turned to attack on the return leg. Wym0 in the CS-63 met his Action X counterpart in CJ on the hill but it was TheReturned who found himself in trouble. He ran into two Action X tanks and lost half his health. The Sentinels’ Rowendy joined Wym0 on the hill but they took a while to kill CJ. That time forced more guns to be looking his way and let the Action X bleed the Sentinels more. The Sentinels made the call and pushed around the attacking side of the donut with three tanks. Wym0 tried to join them and was removed. Rowendy lead his team trying to find the overmatch but a brawl ensued instead. Action X had bled the Sentinels enough to allow them to take both games on their opponents’ map choice.

Looking to send this game to a tie breaker, the Sentinels set their sights on the 2 flag. They dumped into the cap and settled in for a brawl. Action X, who had spread their defences, rotated looking for angles onto Rainbow on the cap. Ironguard and Trax found themselves two against one against TheReturned. He went down as did Syndy. With the tank advantage Action X pressed on, isolating Sentinels’ tanks, removing them from the game and taking the win. 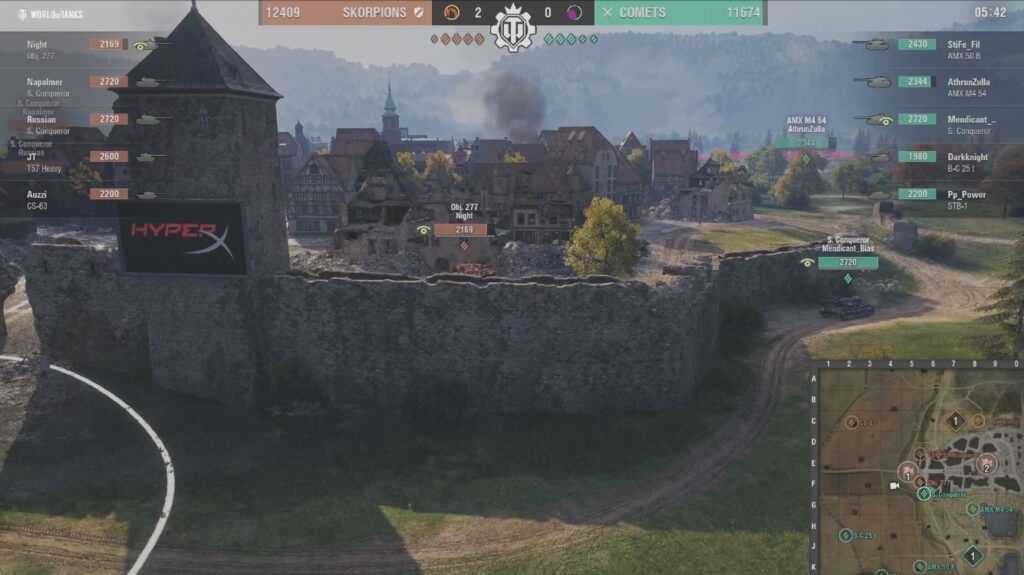 The last time these two teams played the Comets were only able to field four tanks. Since then, they’ve found some success. Meanwhile the Skorpions were solidifying their position at in the top two. Would the Comets be able to overcome the Skorpions? Or would the Skorpions’ class shine through?

The Skorpions started on defence of their map pick. They moved to the ridge along the E line as the Comets ran the 2 line. The Comets cut in to try and to surround the Skorpions but a moment of indecision allowed the Skorpions to take out two tanks. A 3v5 resulted very early in the match with the very healthy Skorpions tanks able to isolate and removed their opponents’ tanks and go up 1-0 early.

Siegfried Line is the new map this season and the action moved to there for the Comets’ map pick. Both teams adopted what’s becoming a fairly standard opening for this map. The Skorpions took control of the town near the 1 flag with a tank in the field at C2 spotting. Their opponents in the Comets spent a lot of time looking for a way into the south of the town. The Comets pushed onto the 2 flag as Darkknight engaged the Skorpions’ Auzzie. They over-extended into the town as the Skorpions got them in a crossfire. Two Comets’ tanks went down and the Skorpions took control. A kill went the way of the Comets but it was too late. The Skorpions take the win.

Moving to attack, the Skoprions took south-western control of the town. They jumped on the 2 flag, applying the cap pressure. The Comets got some decent bleed damage as the cap timer ticked down. PP_Power from the Comets got the reset shot and the Skorpions were looking for another strategy. They pushed into the town and Raspberry got punished. The Comets kept the Skorpions at bay in the town. A brawl broke out. After a close battle the Comets emerged victorious.

The Skorpions defeat the Comets 3-1. 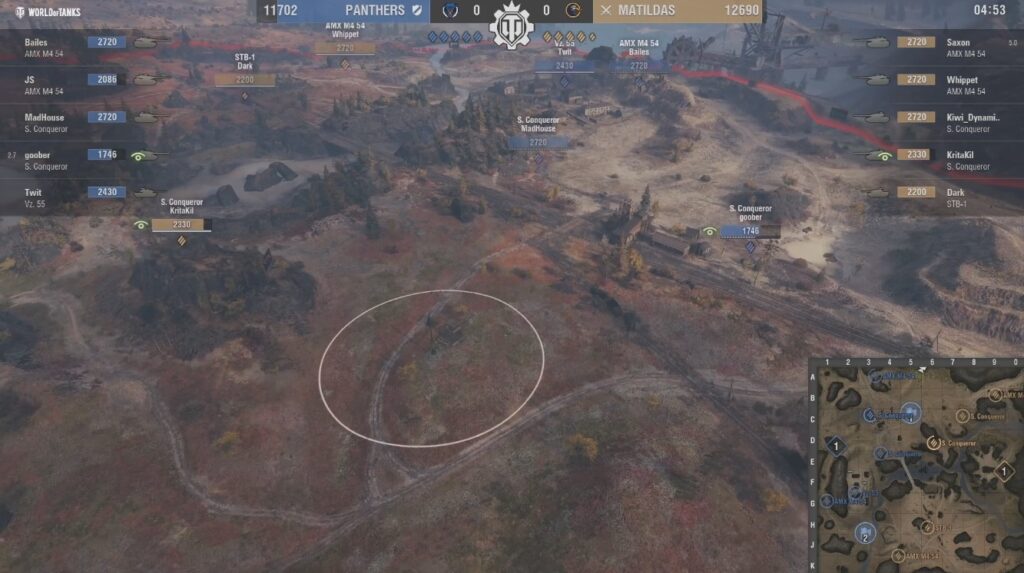 The Matildas were in danger of falling too far behind the pack. Their opponents, the Panthers, were thinking about starting to lock down third. Who would walk away with the win?

The action moved to the Matildas’ map pick. On the attack, the Matildas Whippet met JS in the town. The Matildas put two tanks on the 1 flag. The cap timer was ticking down though. Twit from the Panthers pushed in for a reset but bled a lot of HP. The game came down to a 3v3 with the Matildas having a slight HP advantage. With Saxon fairly healthy the odds with in the favour of the Matildas. The Panthers’ Bailes was the last tank standing for his team as the Matildas jumped on the cap again. He tried for the reset shot but was taken down. The Matildas go up 2-1.

Looking to send the game into a tie breaker, the Panthers moved to attack. They ran in numbers towards the 1 flag. The Matildas also headed that way and a brawl ensured. Saxon was traded for Balies as the Matildas found the over match against MadHouse. The Matildas won themselves 2v4 advantage but the Panthers tanks were healthy. Using their numbers, the Matildas took the win.

The Matildas defeat the Panthers 3-1. 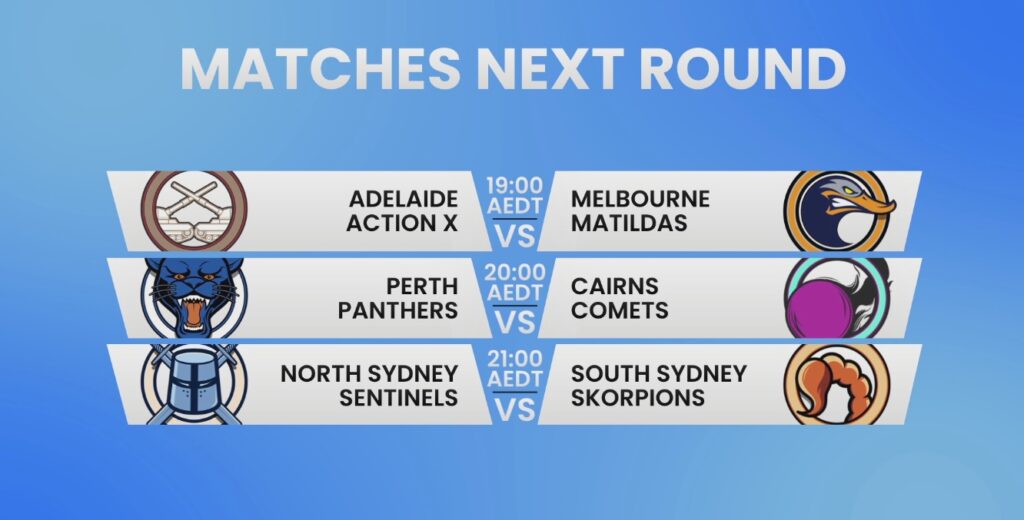 With only three rounds left until finals the teams will be fighting for their lives! Action X will be seeking to keep their top four position against the Matildas in the opening round of the night as the Panthers look to bounce back from their loss when they take on the Comets. The big game of the round is the Sydney derby, the Sentinels and Skorpions battling it out for 1st place.