World Of Tanks ANZPL Season 5 Round 8: Who Will Make Finals?

World of Tanks ANZPL Season 5 Round 8 Is done and dusted. With only two rounds remaining the top four is shaping up. Which teams are in the running for finals action? 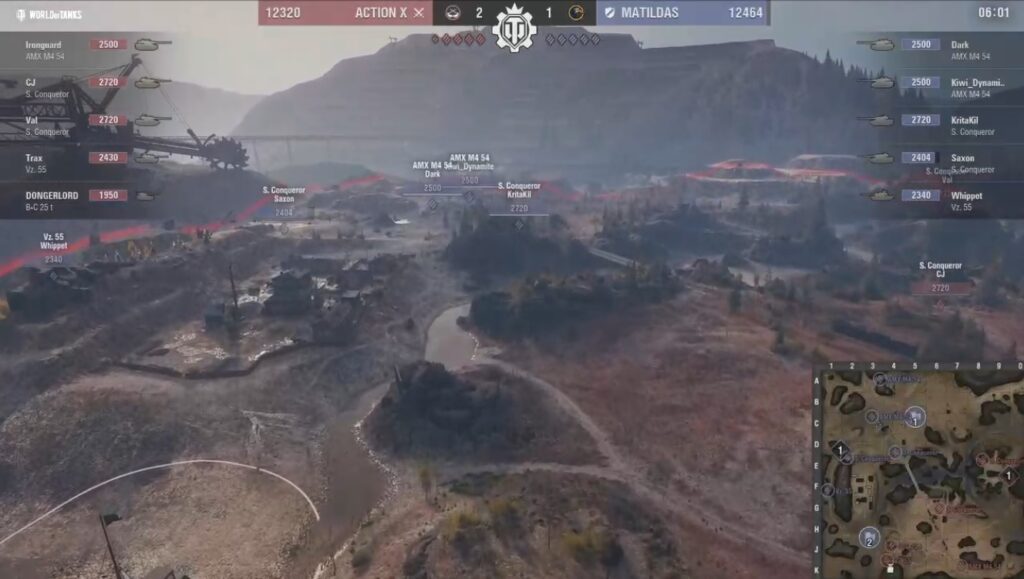 The Matildas had a surprise win over the Panthers last week. On the other hand Action X were able to take down the ever dangerous Sentinels for the second time this season. Would the Matildas string together wins for the first time in Season 5 or would Action X capitalise on their recent good form?

Tonight’s matches kicked off on Action X’s map pick. Starting on defence, they sent a tank for spotting to the hill at F9 while the rest of the team settled in for a 1 flag defence. The Matildas pushed the 2 line and traded their own KritaKil for Action X’s Val. Saxon from the Matildas went down but Action X very quickly lost Gloster as well. The Matildas started the 1 flag cap and the pressure was on Action X. They rotated along the A line and found shots onto Action X’s Dongerlord. The game came down to a 2v2 but the Matildas had the HP advantage. In the end the Action X were able to overcome the disadvantage and take the win.

The Matildas moved to defence on the return leg. They set up a heavy 1 flag defence. Whippet from the Matildas took a lot of early damage in the T-100 LT. Saxon and Kiwi_Dynamite found great shots onto Ironguard from the Action X and removed him. They continued driving the 1 line and isolated Gloster. Action X struck back and removed Dark but it was still a 3v4 tank disadvantage for them. They started applying cap pressure on the 2 flag. When the Matildas moved in for the reset shots they dumped over the train line and traded Kritakil for Trax. The Matildas held the lead and levelled the series.

Moving to the Matildas’ map pick, Action X started on defence. They set up a standard Tundra defence as the Matildas looked for a way onto the 1 flag. Not finding a way in they rotated to the south. They found their way onto the 2 flag, drawing Action X in. Action X found picks and isolated the Matildas. Eventually Action X get the win and go out 2-1.

The return leg started slowly. Action X set up for a 2 flag push as the Matildas looked to the north. The team from Adelaide found a few shots into their opponents before starting the 2 flag cap. Coming from the north, the Matildas ran the 1 line looking isolate Ironguard on the cap. Dark was traded for him as Action X’s focus fire reigned supreme and they took the win. 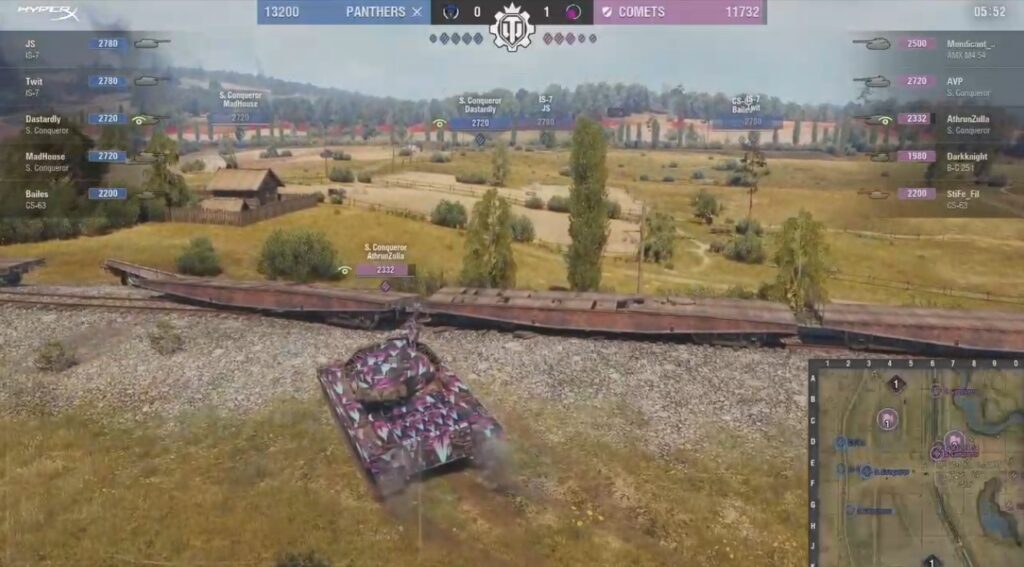 The Comets were proving that they had what it takes to compete with the ANZPL. Under pressure after a loss to the Matildas last week, the Panthers were seeking redemption. With both teams looking for a win to help their finals campaign it was sure to be an interesting match!

The Panthers started on defence of their map pick as the Comets crossed the train line and looked towards the 2 flag. With control of the eastern side of the map, the Comets started applying cap pressure. Twit from the Panthers was able to get the reset but bled significantly. The Comets abandoned the cap and thraded two-for-two. But when Dastardly from the Panthers went down the Comets were in control. It came down to a 2v1 in favour of the Comets which they won to take the opening match.

The return leg started with the Comets sending two tanks to the hill at F0. Having gained some information the Panthers rotated from the eastern side of the map and pushed down the 1 line. They were able to get JS onto the 1 flag. They thought they had picks onto the Comets’ Darkknight and Stife_Fil, but they had support. Dastardly lost half his health looking for shots. Stife_Fil went down as the Panthers were able to bleed the Comets. The Panthers took the advantage and levelled the series 1-1.

Moving to the Comets’ map pick, they moved all the way down to A7 with three tanks at the north-eastern corner of the town. They pulled back to the south of the town and pushed on the two flag. The Comets started the cap but the Panthers were able to get the resets in easily. They were able to isolate Bailes from the Panthers and remove him but the Panthers struck back removing AVP. It came down to a 2v2 but fancy driving from Darkknight gave the Comets the HP advantage. The Comets pressed their advantage and went up 2-1.

Needing a win to send the game to a tie breaker, the Panthers moved to attack. They put Twit on the cap early but the Comets had great angles. He took two shots just settling on the cap. The Comets found shots onto Madhouse as well as a brawl ensued. Great positioning and rotations from the Comets allowed them to get the kills and take the win.

The Comets defeat the Panthers 3-1. 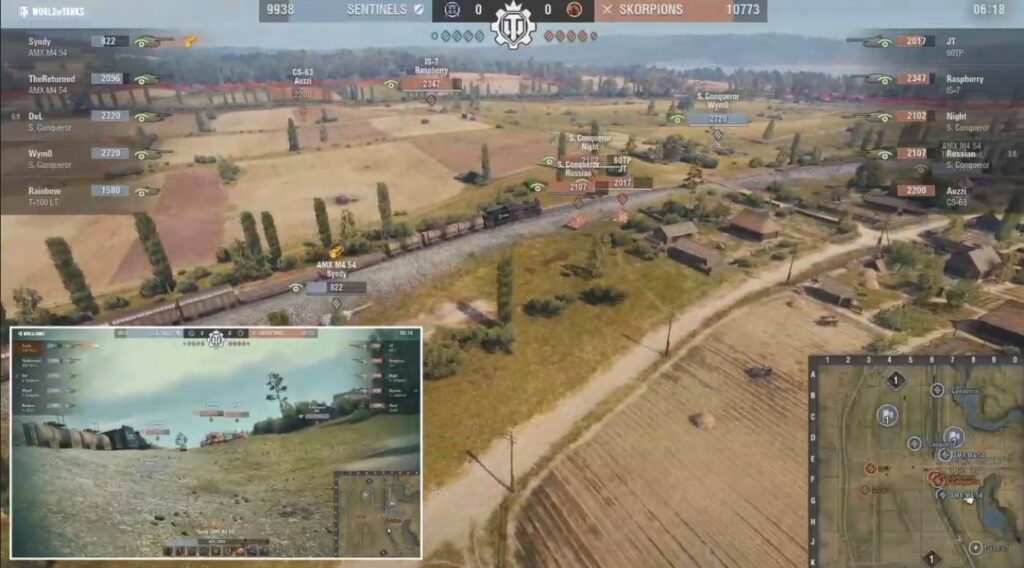 In what was sure to be the match of the week the Skorpions were seeking to hold onto top spot. Close behind them though is the Sentinels. Traditionally the Sentinels had the advantage over the Skorpions. How would this game play out?

The Sentinels moved to attack on the return leg. They drove the 2 line and gained a lot of map control on the western side of the map. Pushing two tanks onto the 1 flag, the Sentinels settled in and waited for the Skorpions to make their move. Russian and Night from the Skorpions found the resets but Night bled a lot of HP. The Sentinels traded two of their tanks for one of the Skorpions and the momentum swung towards the Skorpions. They were able to find the win and take both matches on their opponent’s map pick.

The Sentinels needed a win to stay in the game on their opponent’s map pick. They split their forces and were able to take hill control. The Skorpions found an overmatch against Rainbow and Syndy but with support from Del were able to strike first. A brawl ensued which saw the Sentinels take a quick win.

Moving to attack on the return leg, the Sentinels’ TheReturn took a lot of damage early. Playing on the ridge of the hill Del also took some early damage. The Sentinels struck back with some bleed damage of their own. A stalemate ensued with both teams looking for a way in. The pressure was on the attacking Sentinels and eventually they pushed over the ridge. A two for one trade seemed like a good deal for the Sentinels but they had a lot of low health tanks. The game levelled to a 2v2 with the Sentinels finding the win and sending the game to a tie breaker.

The Skorpions defeat the Sentinels 3-2.

Raspberry (274.5) from the Skorpions scored more fantasy points than two of members of the Fantasy team of the week but due to player limit was included. 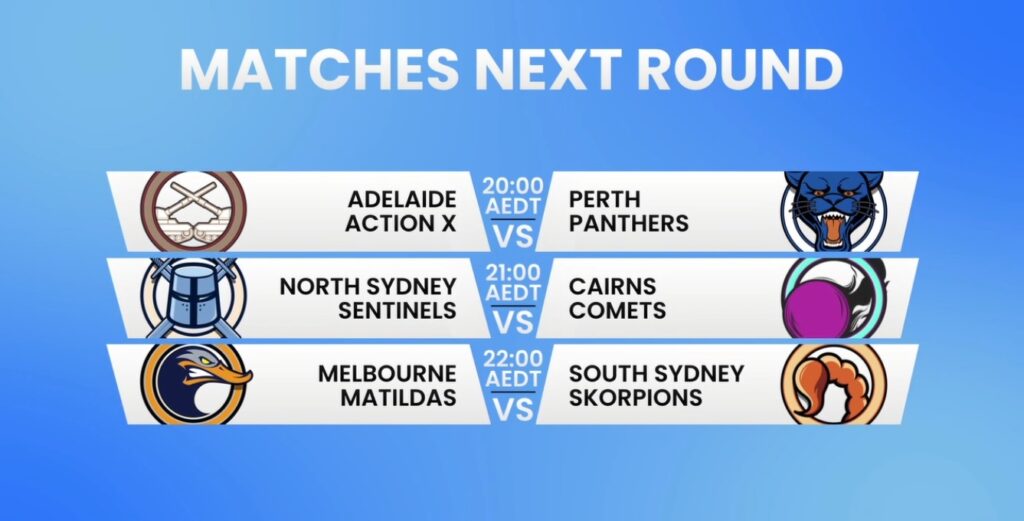 With two rounds left in the regular season the competition is heating up! Action X and the Panthers battle for a finals spot in the first match of the night before the Comets take on the reigning champs the Sentinels. The last game of the night is between the Matildas and the Skorpions.