World Of Tanks ANZPL Season 5 Round 9: This is it!

World of Tanks ANZPL Season 5 Round 9 over. Who won? Who lost? Check out the results below! 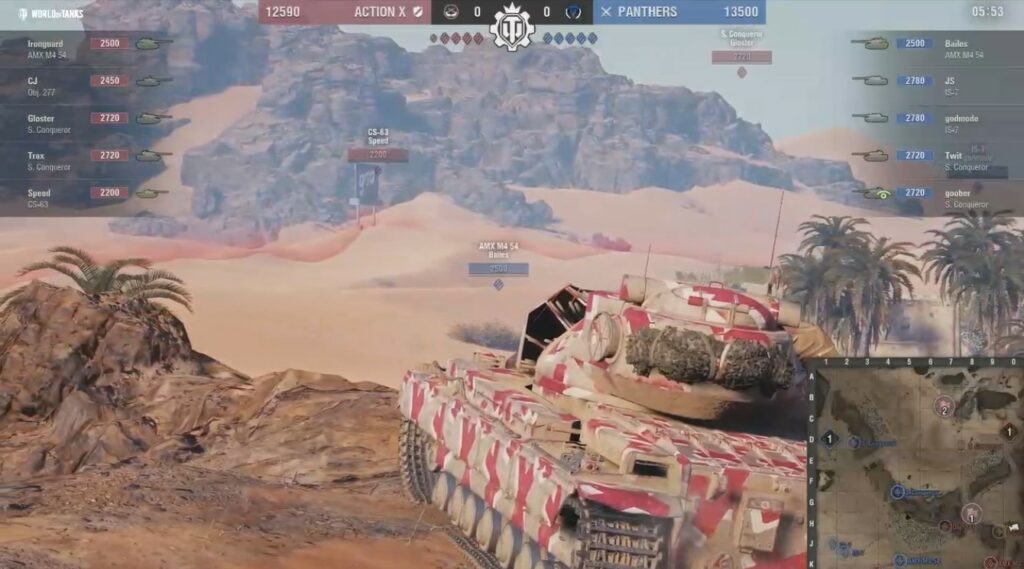 It was do-or-die for the Panthers against the Action X. Two losses against sides they were expected to beat have put them on the back foot. A win for Action X would secure them a playoffs spot after having narrowly missed out in Season 4.

Action X started on defence of their map pick. They went quite aggressive with the 2 flag defence, leaving the 1 flag virtually undefended. Speed from the Action X found himself in a precarious position at K5. He isolated himself and the Panthers found an early kill. The Panthers pushed into K9 and found themselves in a 2v2. Action X won that without losses, but the Panthers won the 3v2 with no losses. The Panthers pushed onto the two Action X tanks at K9 and took the opening win.

Moving to attack on the return leg, Action X looked towards the 2 flag. The Panthers had set up for this. Two opposing tanks settled along the ridge at D6 with two Action X tanks along the A line. Trax from Action X snuck onto the 1 flag with Speed as support. Bailes from the Panthers  spotted them and that was the signal for the Panthers to dump on the tanks near the 2 flag. CJ and Ironguard went down before Action X also lost a third for only one Panther tank. Now in a 2v3 it was an uphill battle for the Action X. When Twit from the Panthers was able to remove Trax it left Speed on his own against three opponents. All the Panthers had to do was wait for the time to run out as they went up 2-0 on their opponent’s map pick.

The Panthers started on attack of their map pick. They sent four tanks to the ridge at the E line as Action X countered by massing at E7. JS from the Panthers got onto the 1 flag and started the cap. Godmode joined him as Gloster from Action X peeked and got the reset. Action X were bleeding but Action X found the pick onto Goober forcing the Panthers off the cap and got a 1 for 1 trade. The Advantage was with Action X as they applied the screws and took the win.

Looking to send the game to the tie breaker, Action X were caught by a very aggressive push from the Panthers’ JS. JS held out for a while but eventually went down. The Panthers bled way too much trying to take down two Action X tanks. When the dust settled Action X had 3v2 tank advantage and was significantly ahead in HP. Action X started the cap to draw the remaining Panthers’ tank out. He was eventually found as the Action X sent the series to a tie breaker. 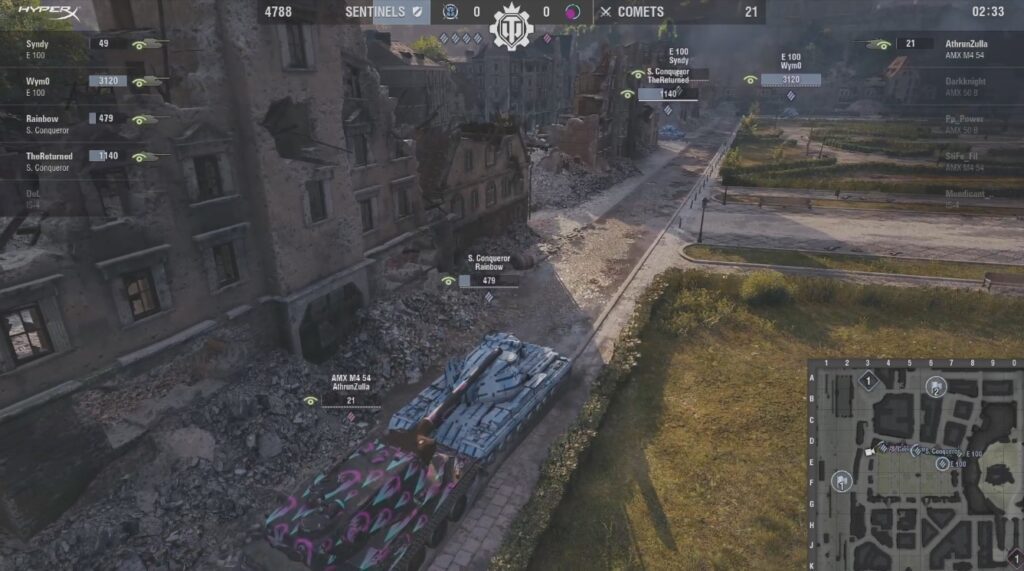 The Comets were on the verge of making finals in their first season after being promoted from the ANZBL. The Sentinels are the three-time champions of the ANZPL. Who would come out with the points?

The Sentinels started on defence of their map pick. They straight away looked for the 2 flag push along the banana at the 8 line. The Sentinels’ Del spotted three Comets tanks at G8. That forced a re-think of strategy. They pushed cautiously towards the 1 flag instead. Syndy from the Sentinels had clear vision down the 2 line, once again forcing the Comets to pull back and re-assess. They returned to the banana and dumped onto Del. The Comets’ Mendicant_Bias was traded back as the Sentinels created crossfires. A brawl ensued but the tanks and the HP was in the favour of the Sentinels as they took the first match.

The return leg saw the Sentinels move to attack. They sent two tanks to the hill for spotting as the others waiting at the south east side of the courtyard. For their part the Comets prepared a heavy 2 flag defence. With not much spotted the Sentinels had an idea of where the Comets were. They were able to isolate the Comets’ Stife_Fil. The Comets struck back and removed Syndy. Del was traded for PP_Power before the Comets’ AthrunZulla went down, giving the Sentinels the advantage. The Sentinels tightened the net and took a 2-0 lead.

The action moved to the Comets’ map pick. Starting on attack they pushed the 0 line towards the 2 flag. They spotted TheReturned and committed very deep. The Sentinels easily removed Darkknight from the field and they pushed their advantage. Stife_Fil and AthrunZulla went down and it wasn’t long before the Sentinels eliminated the remaining two tanks. The Sentinels take the win.

The Comets moved to defence on the return leg. They adopted what has become a pretty standard Siegfried line defence as the Sentinels went full send. Syndy and AthrunZulla were traded as the Comets pushed into a brawl. They trapped the Sentinels and made the most of their focus fire. The Sentinels brought it back to a 2v1 but the Comets were able to take the win.

The Sentinels defeat the Comets 3-1. 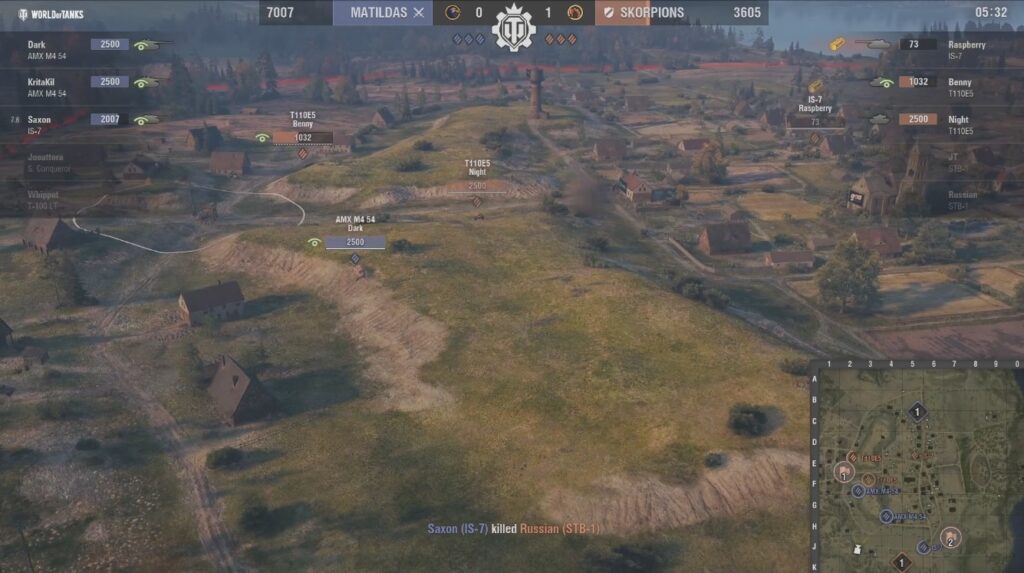 Season 5 had not been kind to the Matildas. Wins had been hard to come by for them and it wasn’t about to get easier. Their opponents tonight were the Skorpions, currently sitting on top of the ladder.

Moving to attack on the return leg, the Matildas spread through the town as Whippet pushed onto the 2 flag. The Skorpions had headed for the north of the map and found the pick onto Joeattora. Whippet followed not long after but the Matildas struck back, making it a 3v3. The Matildas had a substantial HP lead. The Matildas found the picks and equalised the series 1-1.

The action moved to the Skorpions’ map pick. Starting on the attack Russian quickly crossed the train line at E6 and scouted the 2 flag. Raspberry from the Skorpions managed to sneak down to A6 as the Matildas found themselves very deep chasing Russian. It looked to be going well for the Matildas but the Skorpions found a two-for-one trade in their favour. All of a sudden the Skorpions were in total control as they went up 2-1.

The Skorpions defeat the Matildas 3-1. 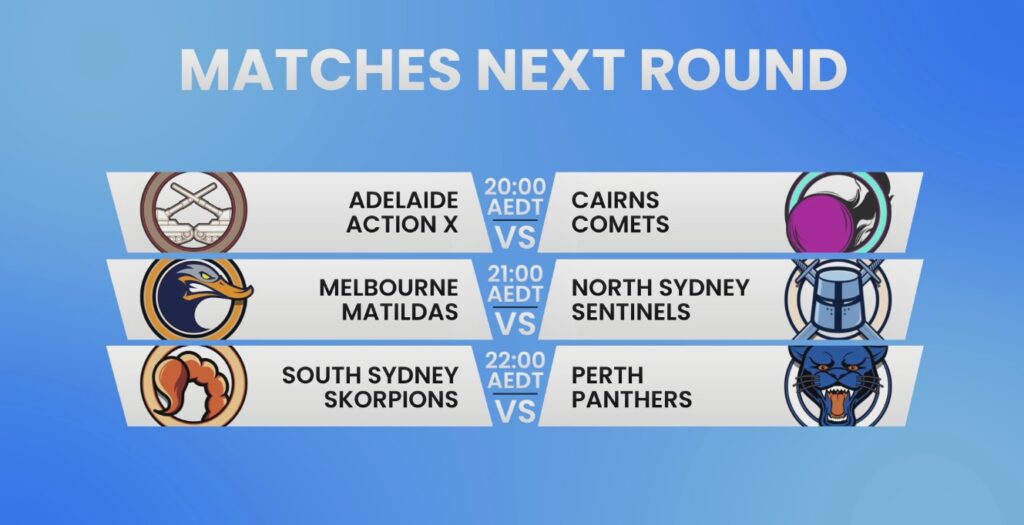 With one week to go in the round robin Action X have secured their playoffs position, but the Comets still need to cement their spot. They’re up first in my pick for match of the round. Then the Matildas look to salvage some pride from their season against the Sentinels. Lastly the Panthers have the unenviable task of having to take down the Skorpions to even have a chance at a playoffs spot.

The Road To Playoffs

With one round left to go three teams have secured their place in the playoffs. The Skorpions and the Sentinels are jostling for first and second with only two points separating them. Action X has also secured their playoffs spot. That leaves just one place left. The Matildas are not able to make the finals which leaves the Comets and the Panthers searching for a win to enter the playoffs.

The Comets’ destiny is in their own hands in their match against Action X. A win secures them the last playoff spot. The Panthers have a hard job needing to get at least a tie breaker win against the Skorpions and for the Comets to lose to make playoffs.