World Of Tanks ANZPL Season 5 Round 10: Who Made Playoffs?

World of Tanks ANZPL Season 5 Round 10 has been fought. Teams are now locked in for playoffs. Check out the results from the last round robin of Season 5. 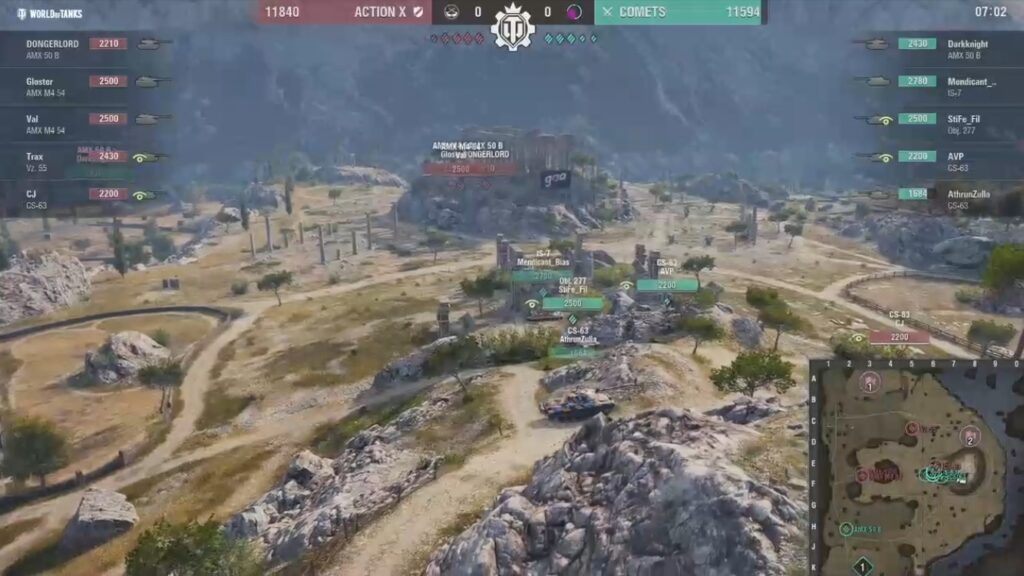 Action X locked in their playoffs spot in Round 9 but were looking to keep their momentum. A win would secure the Comets their playoff spot though, so they would be coming hard.

The Comets started on attack of Cliff. They took hill control, but Action X weren’t there. Instead, they’d headed for the donut. Action X found shots onto the Comets’ AthrunZulla, leaving him on 64 HP. Action X then pushed three tanks onto the hill looking to force the Comets’ collective hands. They took some bleed but were able to remove AthrunZulla. Dongerlord from Action X was traded with AVP but when the Comets’ Mendicant_Bias went down the dominos started to fall. Action X pick up the opening win.

Action X moved to attack on the return leg. They sent Trax in his CS-63 to the hill. Damage was traded around the donut and Action X’s CJ found himself in trouble on low HP. The game settled as both teams looked for an angle in. Gloster from the Action X was able to rotate round the hill and start the 2 flag cap. That forced the Comets to rotate for reset shots. Eventually that had to dump over to the northern base of the hill. The Comets for the reset shot but had bled heavily. Gloster had lured the Comets out and given his team an early 2-0 lead.

Action X moved to attack. The Comets went very aggressive pushing a tank to the south west of the town. They full sent onto Action X but the focus fire from Action X quickly removed two Comets’ tanks. Action X had two one shot tanks but the Comets couldn’t find the shots in. Val from Action X went down but it was too little too late as Action X took the win. 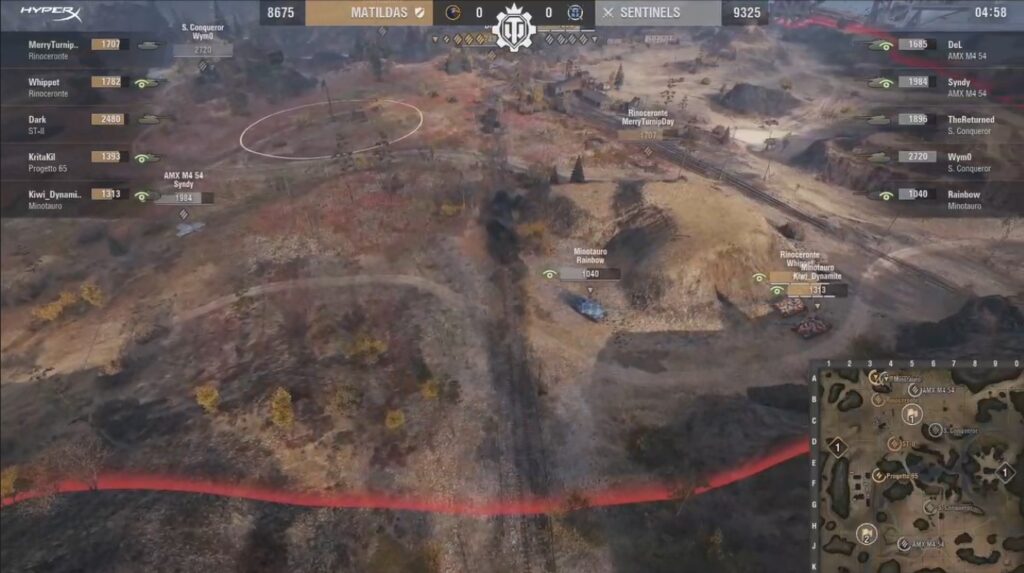 The Sentinels may have already locked in their playoffs spot but that didn’t mean they were resting on their laurels. Meanwhile the Matildas were looking to finish their season on a high and take down the three-time champions.

The Matildas opened on defence of their map pick. They took a standard defence with the focus to the 1 flag but also with two tanks keeping an eye on the 2 flag. The Sentinels scouted the normal hold down spot at A3. KritaKil from the Matildas moved to H5, a different position on defence. He spotted two Sentinels’ tanks and rotated north. The Matildas found a 2-for-1 trade but it didn’t take long for the Sentinels to peg it back to a 3v3. Having the HP advantage the Sentinels found the picks and took the opening win.

The Sentinels moved to defence on the return leg. The Matildas went very different with their tank selection with a double Maus, E50M, Grille 15 and Pz Kpfw VII. Sometimes the Maus gets played due to its large HP but the rest are extremely non-standard tanks in the ANZPL. The Matildas struck first removing Rainbow but the Sentinels struck back and removed Dark. Finding some good bleed damage the Matildas had the HP advantage. Never count the Sentinels out though. They found the picks and went up 2-0 on their opponent’s map pick.

Cliff is a Sentinels favourite so it was no surprise they picked it. They started on attack by moving TheReturned in his CS-63 to the hill and the rest to the base of the donut. The Matildas were looking for a brawl though and found the 5v4 over-match at the donut. Their opponents found the first kill before trading kills giving them the tank advantage. In a very quick game, the Sentinels found the picks and took the win.

The Sentinels defeat the Matildas 3-1. 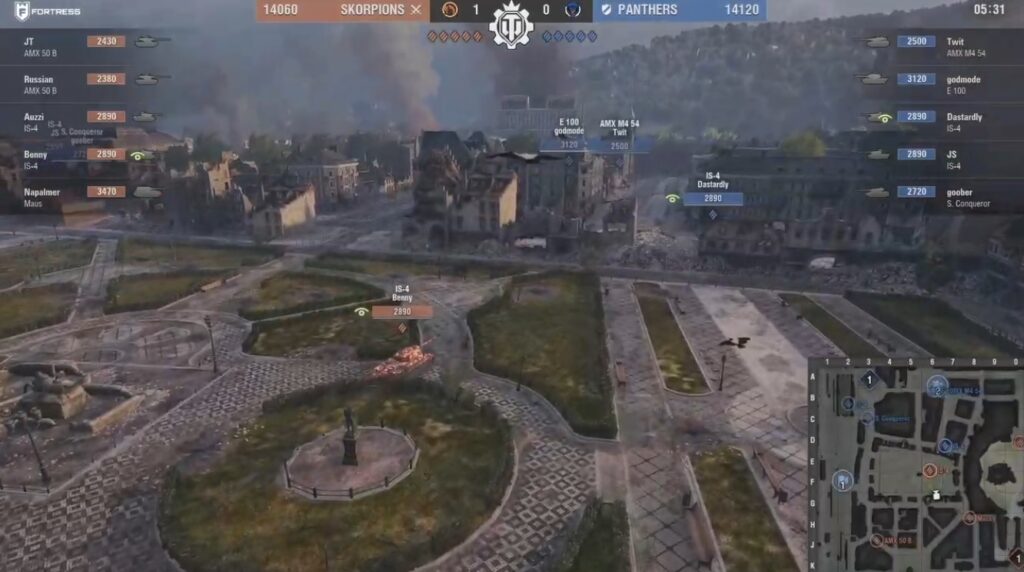 It was do or die for the Panthers. A win would put them into playoffs. In their way was the Skorpions and a win for them would cap off a dominant round robin and secure them 1st place heading into the playoffs.

The Skorpions moved to attack on the return leg with three tanks on the hill and two at G8. For their part the Panthers set up more towards the 2 flag with a spotter looking down the 2 line. Benny scouted the courtyard and was able to make the cross unscathed. With a lot of map control the Skorpions made them move. They found Dastardly at C7 and removed him. Their focus fire found a 1-for-1 trade but they were firmly in control. The dominos fell as the Skorpions went up 2-0.

The action moved to the Panthers map pick. They started on attack with three tanks going to the southeast of the town while the other two went to K4 for scouting. They found a lone CS-63 with the rest of the Skorpions crowding the 2 flag. The Panthers drove onto the 2 flag in numbers, eliminating Benny. The Skorpions traded back by removing JS. It was a 4v3 match in favour of the Panthers by Skorpions had the HP. It was the Panthers that were under pressure with the clock against them. They were forced to push forward into Skorpions’ fire. The Skorpions found the kills and took the win.

Playoffs were now out of reach for the Panthers, but pride wasn’t as they moved to defence. With the match a dead rubber both teams brought out some interesting tank choices. The Skorpions found Twit and removed him from the match before dumping onto Godmode. The Skorpions had bled a fair amount of HP but with more guns in the game they had the advantage. When the smoke cleared the Skorpions had taken the win.

The Skorpions defeat the Panthers 4-0.

The sun sets on Season 5 for the Matildas and the Panthers as we head into playoffs but there are four other teams who are continuing. The Upper Bracket Final kicks off between the Skorpions and the Sentinels at 8pm AEDT. Then Action X take on the Comets in the lower bracket final at 9:30pm AEDT.