“World of Tanks Blitz has a tradition of dropping important updates and adding special activities on its anniversaries to celebrate them together with the community. This June, we treat our player base to a slew of long-developed improvements to graphics that will make the battlefield visual experience even more realistic without impacting the performance, a new U.S. tank line with a fresh mechanic, and lots of fun modes and events,” says Andrey Ryabovol, WoT Blitz Product Director. 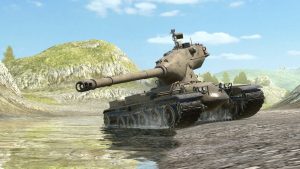 The new 8.0 update features lifelike graphics enhancements across the entire game including realistic suspension behaviour and environment behaviour with snow, mud and water. For example, when sticky mud on tanks get washed off in water. When the tank comes out of the water, it’ll not only be noticeably clean but will also stay wet and then dry as time passes. Other graphical elements such as cloth, rubber and metallics have all been enhanced with physically-based rendering.

New vehicles have also been added to the World of Tanks Blitz lineup in the 8.0 update. Four Tier VII-X vehicles have been added as part of the new American heavy line. The line is based off of tanks from 1953 which were a part of the U.S. Army advanced research program.

Since this a birthday-themed update, World of Tanks Blitz is also running a limited time event. Blitzland is an in-game tank themed amusement park where you can win yourself unique tanks by participating in Blitzland activities. Blitzland will run the Shooting Gallery from June 14-21 and Strength-O-Metre from June 21-28. 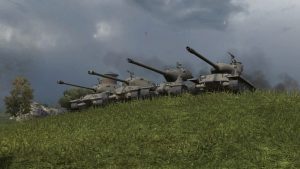