A modern army has rolled into World Of Tanks for the very first time in a new update for the console version. Modern Armor introduces a plethora of new tanks for World Of Tanks Console taking the fight into the late 20th century. After a decade of fighting with WWII era artillery, players will now be able use tanks such as the T-72BM, T-44A, M47 Patton and many more.

Modern Armor allows players to fight during the distinct eras of the Cold War. Post War, Escalation and Detente are spread across the Wars 50 year time span. With such a large period of time, matchmaking will be split into to each era to keep games balanced. Four new maps are also available, bringing the fight to Southeast Asia, Germany, Norway and the Middle East.

First Strike, the first of multiple episodes coming to the Modern Armor update, kicks the saga off introducing 18 new tanks for players to research. The Western and Eastern Alliances bring with them 9 tanks each with the West carrying American power while the East boast a Soviet army.

TJ Wagner, Executive Producer for World of Tanks Console, said “We are happy to bring modern tanks and new maps designed from the ground up for players to enjoy! With tanks such as the T42 or the M1A2 Abrams, players will be able to switch between eras and experience modern tanks using new perks and loadouts that will enhance their gaming experience. Modern Armor is our biggest evolution yet, and we look forward to jumping into battles with the World of Tanks Console community with First Strike!” 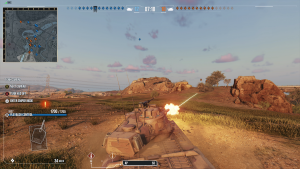