Worlds Most Expensive Ramen Served Up For Yakuza Launch

FOOD and video games often go hand-in-hand but this has taken the relationship between the pair to a whole other level. Xbox ANZ, Five Star Games and Sydney-based ramen purveyors Gumshara have joined forces in one of the most extravagant ways to launch a video game. To help celebrate the launch of Yakuza: Like a Dragon on November 10 for Xbox One, Xbox Series X and PS4, Gumshara are giving one lucky New South Wales resident the chance to win the worlds most expensive bowl of ramen. 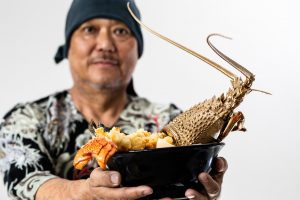 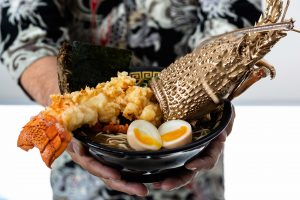 The choice to create such an extravagant dish wasn’t a random decision. Rags to Riches ramen goes hand-in-hand with the story of Yakuza: Like a Dragon protagonist Ichiban Kasuga. After being betrayed by his former yakuza clan, Kasuga hits rock bottom. Searching for answers, he picks himself up from the bottom and rises back to the top. As ramen is traditionally a much cheaper meal starting at $8 a bowl, Rags to Riches ramen reflects on Ichiban Kasuga’s own rags to riches tale.

“Being given a chance to imagine such an over-the-top ramen dish has been fantastic, and I’m proud of what we’ve created. My wife is actually a fan of the Yakuza series of videogames, so I’m familiar with the craziness of the game and hope to have captured its essence in our own way,” says owner and head chep at Gumshara, Mori Higashida.

Along with winning the worlds most expensive ramen, the winner of the grand prize will also win a custom-made Yakuza: Like a Dragon noren (Japanese restaurant banner) as well as a copy of the game on Xbox. Yakuza fans who don’t reside in NSW aren’t completely out of luck though. 10 runners-up from across Australia will also receive a noren and a copy of the game.

“The Yakuza series has always led the industry for detailed storytelling and zany gameplay in videogames, and being able to partner with an authentic tastemaker in Gumshara has been a pleasure. Fans of the series will truly enjoy Ichi’s exciting new story arc and the RPG insanity, while culinary fans will enjoy a new paradigm of rich taste in the Rags to Riches ramen,” says Managing Director at Five Star Games as well as Yakuza and Ramen enthusiast Darren MacBeth.

To enter the giveaway all you have to do is jump over to the @XboxANZ Twitter account between midday today and the games launch day on November 10.