WRESTLING is all about being over-the-top and full of high energy, so how has 2K taken this a step further? By throwing WWE 2K into the arcade realm and adding a few extra dashes of mayhem to create WWE 2K Battlegrounds. Teased earlier in the year, Battlegrounds looks aesthetically similar to the NBA2K Playgrounds franchise both offering not only a large roster to choose from but also a more casual gameplay experience. This will also be the first time a WWE 2K game can be played on the go with WWE 2K Battlegrounds being launched on Nintendo Switch as well as Playstation 4, Xbox One and Steam on September 18.

WWE 2K Battlegrounds takes the fight out of the stadium and into some unexpected environments. You’ll be fighting in the middle of Mexico, a castle in Scotland and in the thick of the Everglades. Since most of the environments are also interactive, you can take advantage of your surroundings and cause some pretty over-the-top mayhem never before seen in the ring. For example, you can throw your opponent into the jaws of an alligator or you can smash an entire car over their head. Even though these chaotic moves may give you an advantage, WWE 2K Battlegrounds is said to be easy to pickup yet difficult to master. There’s a roster of more than 70 wrestlers at launch including Roman Reigns, Undertaker, The Rock, Ronda Rousey and many more. Each superstar has their own class styles: Powerhouse, Technician, High-Flyer, Brawler and All-Rounder The five classes come with their own moves, strengths and weaknesses as well as arcade-style powerups. 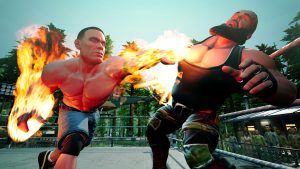 Along with offering this huge roster of WWE Superstars, Battlegrounds also allows you to create your own wrestler and customize them however you want. You can choose their hair, body type, clothes and even facial features. Not only can you personalize your wrestler but you can create your own personalized arenas as well. These are surprising features to find in an arcade-style game such as this.

From what I can gather from the announcement there are multiple versions of each Superstar as well as WWE Superstars that can be unlocked through in-game purchases. By using Golden Bucks you can purchase not only Superstars but also cosmetic items. However, before jumping the gun and saying that these are micro-transactions, this in-game currency is earned by completing objectives and there are no extra purchases required. 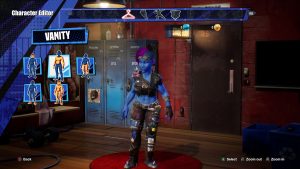 While the experience may be different to the annual WWE 2K entries, most of the gameplay options are fairly similar. Exhibition and casual/tournament multiplayer options are available, both local and online, as well as a campaign mode. The WWE 2K Battlegrounds story revolves around seven new WWE hopefuls who all want that WWE contract. Under the guidance of “Stone Cold” Steve Austin and Paul Heyman, you’ll be competing for the contract in different locations around the world. In doing so, this will also unlock the various arenas available. King of the Battleground is a new online mode pitting you against three other players in the ring, but there’s a catch. Four more are waiting outside, busting to get into the ring as well.

Overall it looks as though WWE 2K Battlegrounds is a smaller casual experience with a big game feel. WWE 2K Playgrounds is ready to pre-order now in both Standard and Deluxe Digital Editions (which includes bonus Superstars, Golden Bucks and cosmetic items) and launches September 18.